The Jussie Smollett case has been an emotional roller-coaster ride for Democrats and Trump-haters across the country. When his story first surfaced, liberal politicians, celebrities and news commentators gushed with boundless compassion for Smollett and sneered with contempt for his presumed white attackers. “This is America in 2019,” one commentator lamented, her voice dripping with disgust. Yet all the while, they suppressed an almost palpable glee — the exuberance that comes with vindication. They believed Smollett had given them irrefutable proof that America had become a racist country under Donald Trump’s presidency.

Then, in an instant, it was gone. They were left stunned and dumbfounded, duped by a charlatan from their own ranks.  After learning the whole thing was a hoax, a few did some perfunctory soul-searching. Some announced they would wait — belatedly — for all the facts. A few even continued supporting Smollett. Evoking memories of O.J. Simpson, they theorized that “racist” police were trying to railroad an innocent black man.

But Democrats don’t need Smollett to denounce Trump as racist and the cause of today’s racial divide.

Yes, the divide is real. One Gallup Poll indicates that 42 percent of Americans were worried about race relations in 2017 vs. just 17 percent in 2014.

But the problem began long before Trump was elected. 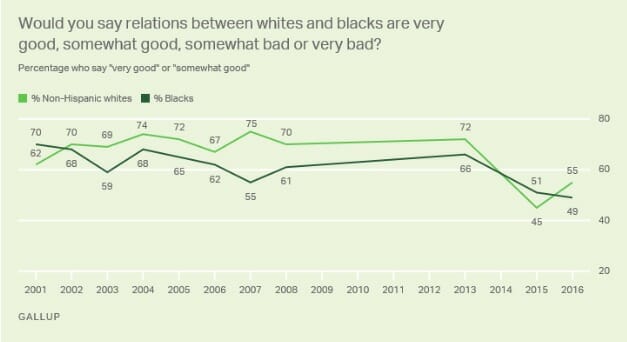 With the election of America’s first black president, Democrats discovered just how versatile a weapon the race card could be. They used it mercilessly, relentlessly to attack Obama’s critics. Anyone who raised questions about his birth certificate or his unexplained social security number was labeled racist. Those who were suspicious of his Muslim background or his long-time association with America-hating Jeremiah Wright, they, too, were called racist. Those who dared challenge his unilateral DACA decree and liberal border policies were attacked as racist. Even the political opponents who challenged his socialist doctrine of wealth redistribution were branded as racist.

Obama’s election launched a national obsession with racism, and he did nothing to quell it.

As a presidential candidate, Obama pontificated about racial unity with inspirational words like these: “There is not a Black America and a White America … there’s the United States of America.” As president, his rhetoric changed. In 2016, at a memorial service for slain police officers in Dallas, he was somehow compelled to talk about the legacies of slavery and Jim Crow, adding, “If we’re honest perhaps we’ve heard prejudice in our own heads and felt it in our own hearts … No institution is entirely immune. And that includes our police departments.”

During his presidency, the fanatical anti-police organization, “Black Lives Matter,” was born, and Obama wasted no time embracing it. During lighter times, he related personal anecdotes, like the time, as a young professional, he was allegedly mistaken for a valet while waiting for his car.

Perhaps, in his mind, Obama was only highlighting the remnants of Jim Crow, but who can doubt that those subtle references and innuendoes contributed to the widening racial divide? In fact, Obama started with a country that was reasonably content with race relations and left a country that felt angry, shamed and deeply divided.

Donald Trump was elected with his promise to reverse the policies implemented by Obama, especially those related to border security. For that, Democrats wasted no time branding him and his supporters as racist.

Today, they are more obsessed than ever with racism. They try to eradicate America’s past by tearing down historic monuments. In schools, venues are established where no white students are welcome, and they’re learning concepts once inconceivable to Americans — white guilt and white privilege. And while teachers and professors are convincing students to accept responsibility for something they never did, Democratic presidential candidates are talking about reparations for something that happened 150 years ago.

Related:
Op-Ed: I Did Some Research on the Democratic Party - And Then I Walked Away

Dr. Martin Luther King understood the evils of racism, but he focused on the future. He had a dream. He saw a future, where skin color played no role in one’s destiny, where his children would not be “judged by the color of their skin but by the content of their character.” That dream of a color-blind nation will never be realized as long as Democrats continue to obsess about our racist past. And it certainly won’t ever happen as long as they perpetuate racial division with baseless allegations of bigotry.

They didn’t find what they wanted in the Smollett case, but they’ll keep looking. They’ll root around through prison statistics. They’ll scrutinize police methods. They’ll scrounge through decades-old high-school photos, and they’ll remain ever vigilant for those inappropriate jokes or careless words they can use to show America’s bigotry.

But these champions of racial justice somehow overlook the impact their false and inflammatory accusations have made over the years. As they tiptoe away from Jussie Smollett and the damage he’s done to race relations, they might reflect on their own contributions to the racial divide.

Peter Lemiska is an Air Force veteran and retired Senior Special Agent of the U.S. Secret Service. He is a regular contributor to www.renewamerica.com.

Peter Lemiska
The Western Journal publishes select Op-Eds submitted by our readers. If you would like to submit an Op-Ed, fill out a submission form here: https://www.westernjournal.com/writeforus/.
To Solve the Opioid Crisis, Get Tough on the Border and with Foreign Adversaries
It's Official - the Democrats Are the Party of Open Borders
Epoch Times: Our Response to NBC News' Inappropriate Questions
Insurance Companies Impede Health Care Reforms
Kelli Ward: Trump's Victories Are Stacking Up in Arizona
See more...
Advertisement