It probably won’t be an endorsement that President Donald Trump repeats word-for-word on his campaign website.

“All I gotta say is Trump 2020, b—-,” rapper Lil Pump said in a social media endorsement of the president on Sunday, taking exception to Democratic nominee Joe Biden’s tax policies.

On Monday, the rapper Instagrammed a shot of his face photoshopped onto the body of former Japanese Prime Minister Shinzo Abe as Abe shook Trump’s hand to his 17 million followers.

“THE DAY I MET TRUMP,” the rapper captioned the post.

According to the U.K.’s NME, the Instagram story in which he endorsed Trump has since been deleted.

However, you can see it below.

WARNING: The following video contains graphic language that some viewers will find offensive.

There are a few things that are interesting about this endorsement, and none of them involves an entertainer professing his support of a candidate. That remains as irrelevant as before, even if it’s more unusual coming from the 20-year-old best known for his 2017 single “Gucci Gang.”

Also, let’s please don’t pretend we’re suddenly more open to Lil Pump’s oeuvre than we were. It’s a very particular brand of hip-hop often called “mumble rap” or “SoundCloud rap” — the latter name referencing the music-sharing service where many of the artists in the scene began — with lo-fi production values and very noticeable rough edges around the music. His more recent work has taken on a poppier vibe with better production values, albeit with no noticeable improvements in the quality of the music itself.

I’m not going to offer a definitive opinion on Mr. Pump, but let’s put it this way: If you’re not a hip-hop fan but you saved a Kanye album to your Spotify collection back when he first embraced conservatism and haven’t gotten around to listening to it, begin there.

If you like it, keep listening to Kanye. Then work your way through literally every other conservative rapper you can find (Ice Cube, 50 Cent and Waka Flocka Flame have all expressed some admiration for the president, for instance, and should be listened to in roughly that order) and then get to Lil Pump.

But you probably shouldn’t be picking your entertainers solely on who they vote for, anyhow.

What’s interesting, however, is how quickly you’re going to be erased as an entertainer if you don’t Say The Right Things regarding politicians, particularly That Politician.

Related:
'Dog the Bounty Hunter' Hints That Joe Biden May Possibly 'Commit Suicide' Like Hitler Did

It wasn’t just that others on social media were jumping on him — although there was plenty of that:

lil pump in the voting booth making a music video like pic.twitter.com/oxvQivmhyE

Lil Pump gonna take the Donald Trump trolling thing as far as he can for the Promo… Go ahead bro you need it.

“Wow I never really been into rap music because, ya know, black people, but this Lil Pump guys music is quite the hooo dinger. He really gets it.” pic.twitter.com/au83nN0roC

Original takes, all. Of more interest is the fact that the people at Lil Pump’s label felt it necessary to come out and ensure you knew they didn’t support Trump.

“Tha Lights Global supports everyone’s right to choose a Presidential candidate, however we want to make clear we do not support Donald Trump,” Tha Lights Global CEO Dooney Battle said in a statement Monday, according to Billboard.

“We support Joe Biden and Kamala Harris for President and Vice President because we believe they offer an alternative to an administration that has ignored systemic racial injustice, promoted hate speech and inhumane immigration policies, ignored the problem of climate change and rights of LGBTQ+ individuals as well as many other actions contrary to democratic ideals,” Battle said.

“We believe it is our obligation to speak out regarding this historic election and we believe in a free society where all of our artists can express their opinions.”

Except nobody said Tha Lights Global did support Trump. Representatives of the label instead chose to say they “believe it is our obligation to speak out regarding this historic election and we believe in a free society where all of our artists can express their opinions,” but that they were going to come out and say one of their artists held hateful opinions that were destroying the planet and democracy, among other things.

Of note here is a previous endorsement of Trump by a rapper, that made by 50 Cent in a tweet Oct. 19: 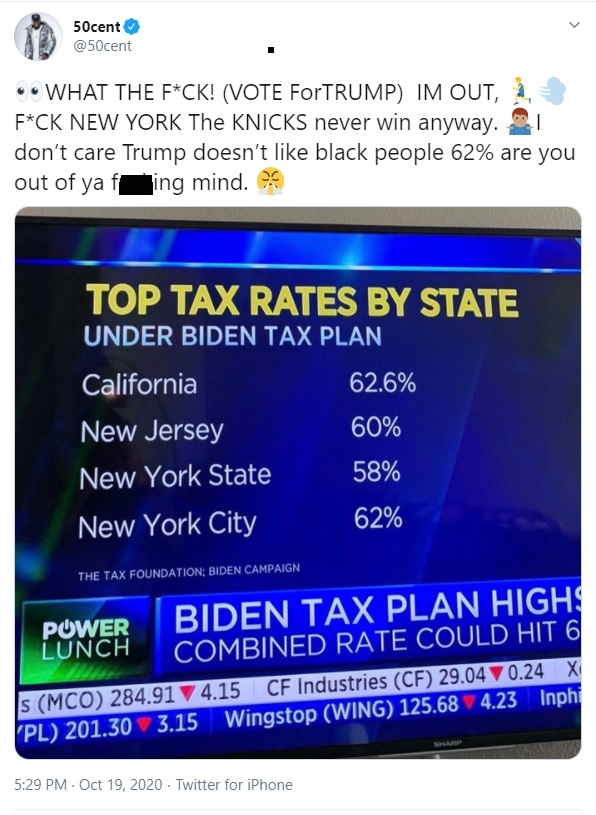 After this happened, 50 Cent’s former girlfriend, comedian Chelsea Handler, offered to pay his taxes for him in order to get him to vote for Biden (not quite the point I think he was making) and then questioned his blackness in an interview with Jimmy Fallon on “The Tonight Show”:

“So he doesn’t want to pay 62 percent in taxes because he doesn’t want to go from being ’50 Cent’ to ’20 Cent,’ and I had to remind him that he was a black person so he can’t vote for Donald Trump and that he shouldn’t be influencing an entire swath of people who may listen to him because he’s worried about his own personal pocketbook,” Handler said, before insinuating he could be bribed with sex.

“I haven’t heard back from him yet, but I am willing to, you know, seal the deal in more ways than one if he changes his mind and publicly denounces Donald Trump,” Handler said. “I might be willing to go for another spin, if you know what I’m talking about.”

We also get that you were telling a black man and your former boyfriend that his political beliefs should be negotiable if you pay his tax bill and offer him sex.

Handler recently helmed a series about excising her white privilege. Being able to do this without being called out in the media for being racist might plausibly fall under the aegis of white liberal privilege, but maybe that’s just me.

Being an entertainer and a conservative is an express ticket to a certain circle of celebrity hell, but if you really want to get to a deeper one, be a rapper and do it.

In the case of Kanye, his mental health issues suddenly became fair game once he doffed the MAGA cap.

In 50 Cent’s case, we get to see his very white ex-girlfriend go on “The Tonight Show” and talk about how she “had to remind him that he was a black person.”

(The rapper might have been swayed by her Fallon appearance. “F— Donald Trump, I never liked him,” he tweeted Saturday.)

I’m not going to express any false love of Lil Pump’s music now that he’s demonstrated some kind of sanity regarding tax policy and which presidential candidate is saner, but I’ll say this much: At least he is showing more courage than a whole lot of other celebrities, who I suspect also know the Democratic Party’s policies are unsustainable and their presidential candidate is untenable but would also prefer to avoid adverse career circumstances.

That might not make mumble rap any more listenable, but it gives me a new respect for one of its practitioners.