A missile fired during an Iranian training exercise mistakenly struck a naval vessel instead of its intended target in waters near the strategic Strait of Hormuz, killing 19 sailors and wounding 15 others, Iranian authorities said Monday.

It also comes soon after a tense naval encounter between Iranian and U.S. forces in the nearby Persian Gulf.

Sunday’s friendly fire incident struck the Iranian navy vessel Konarak near the port of Jask, 790 miles southeast of Tehran in the Gulf of Oman, the Iranian army said in a statement. 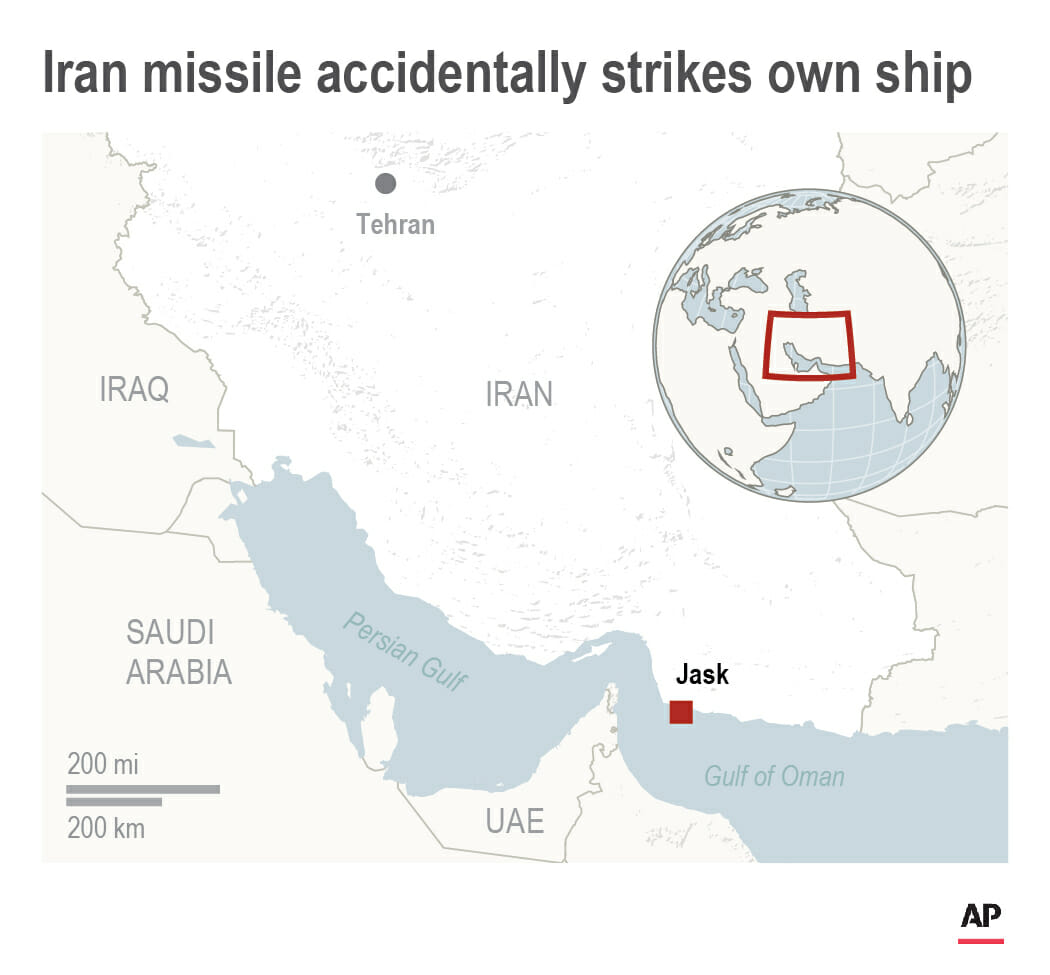 The Konarak, a Hendijan-class support ship taking part in the exercise, came too close to a target and the missile struck it, state TV said.

Authorities did not identify the ship that fired the missile, though semiofficial media in Iran identified it as the Iranian destroyer Jamaran.

The Konarak had been putting targets out for other ships to target, state TV said.

Initially, officials said only one sailor had been killed. That number quickly changed to 19. A local hospital admitted 12 sailors and treated another three with slight wounds, the state-run IRNA news agency reported.

Iranian vessels towed the Konarak into a nearby naval base after the strike. A photograph released by the Iranian army showed burn marks and some damage to the vessel, though the military did not immediately offer detailed photographs of the site of the missile’s impact.

Iranian king Mohammad Reza Shah Pahlavi had purchased the Dutch-made, 155-foot vessel just before being toppled by the 1979 Islamic Revolution. The Konarak entered service in 1988, and crews later overhauled the vessel some 30 years later, making it able to launch sea and anti-ship missiles.

The boat typically carried a crew of 20, and authorities did not explain why it had 34 people on board at the time of the missile strike.

The army identified those slain as including officers and enlisted men, including a combat diver.

Related:
Iranian Reporter Tries to Bait US World Cup Captain with Question About Racism in US - His 'Remarkable' Response Is Going Viral

After firing a missile at the #Konarak military ship killing at least 19, the Islamic Republic of Iran now declares those who died are martyrs!

As if such declaration would wash their hands of this incident pic.twitter.com/itSf0MAxSu

It appeared the sailors may have been firing Noor anti-ship missiles during the exercise, said Reed Foster, a senior analyst at Jane’s. He said a replacement for the vessel “will likely take years to come into service” and represented a blow to the navy as Iran already saw a destroyer sink in the Caspian Sea in January 2018.

“Perhaps the greatest impact to the Iranian military and government is that this is the second high-profile incident in less than half a year where mistakes in missile targeting have resulted in significant loss of life,” Reed said.

Reed added that the friendly fire incident “damages the credibility” of the Iranian military and government’s claim that they can develop sophisticated defense weapons despite international sanctions.

The U.S. has been campaigning to keep a United Nations arms embargo in place on Iran that is due to expire in November.

Iran regularly holds exercises in the Gulf of Oman, which is close to the Strait of Hormuz, the narrow mouth of the Persian Gulf through which 20 percent of the world’s oil trade passes.

The U.S. Navy’s 5th Fleet, which monitors the region, did not respond to a request for comment.

Two years ago, President Donald Trump withdrew the U.S. from Tehran’s nuclear deal with world powers, brokered during the administration of his predecessor, Barack Obama.

In April, the U.S. accused Iran of conducting “dangerous and harassing” maneuvers near American warships in the northern Persian Gulf. Iran also had been suspected of briefly seizing a Hong Kong-flagged oil tanker just before that.

“Potential exists for a limited direct conflict, even though neither side wants one,” the Tel Aviv-based Institute for National Security Studies said.

Virginia Rep. Donald McEachin passed away on Monday, leaving his seat vacant and to be filled after a special election.
By Abby Liebing  November 29, 2022

Alert: Majority of NATO Nations 'Tapped Out' After Arming Ukraine

Is Elon Musk About to Blow the Whistle on Twitter's Free Speech Suppression? 'Public Deserves to Know'

An actor who had an immortal role in the original "Die Hard" film and starred in "Walker, Texas Ranger" has passed away.
By Jack Davis  November 29, 2022

Democrat Katie Hobbs is moving to quell any effort by one Arizona county that might impact the results of this year's election.
By Jack Davis  November 29, 2022

Scientists want to study viruses that have been frozen for almost 50,000 years as they fear some might be released into the atmosphere.
By Jack Davis  November 29, 2022
Next