BERLIN (AP) — Tucked away in a former fast-food kiosk in the German capital lies a new restaurant whose owner hopes will provide a taste of home for the thousands of new arrivals who have fled Syria’s brutal civil war.

After fleeing her homeland, Malakeh Jazmati reinvented herself in Jordan as a TV chef and became known as the “queen of cooking” to fellow Syrian refugees. Now in Berlin, she’s starting over again, opening a restaurant she hopes can serve as “medicine against homesickness” for fellow Syrians, as well as an introduction to her country’s cuisine for others.

During her three years in Berlin, she has already cooked for movie stars at the Berlinale film festival and for Chancellor Angela Merkel at a government event, but the restaurant is her attempt to provide a reminder of Syria for the recent arrivals.

“I’m trying to make this restaurant not just a part of Syria but part of my home,” she said standing in the serving room of the restaurant after a long shift in the kitchen. “The food helps them remember their mothers and the dining tables in their homes, and the photos on the walls remind them of life back in the home country.”

Jazmati’s own culinary story is closely intertwined with the war in Syria and the mass of people seeking asylum in Germany in 2015.

The 31-year-old Damascus native fled her home soon after the war started. Her first stop was the Jordanian capital Amman, where she started hosting her Syrian cooking show on Orient TV, a Dubai-based regional broadcaster.

Its name, Maliket al-Tabkh, or “Queen of Cooking” was a play on her own first name Malakeh, meaning queen.

She had never worked professionally as a chef before, but her natural way of presenting the food and chatting with the presenters made the show popular among fellow Syrian refugees and others.

While she worked, her husband made his way to Germany through Turkey and Greece and she was allowed to join him in 2015 through a family reunification scheme. She was one of hundreds of thousands of Syrians that migrated to Germany that year.

Her small restaurant, housed in what was previously a kebab kiosk in Berlin’s Schoeneberg district, opened its doors October 27 serving traditional Syrian fare.

There is hummus of course, but Jazmati is quick to point out that hummus and falafel and are only a small part of Syrian food. On one Friday, Jazmati was cooking up meatballs in a milk and tarragon sauce, stuffed grape leaves and green beans with garlic and coriander in a tomato sauce.

“I try to cook the food like our mothers in Syria,” she said with a large smile.

Jazmati hopes her restaurant will become a hotspot for newly arrived Syrians, as well as any other people curious to taste traditional Syrian dishes. On the weekends, Syrian musicians play small concerts in a corner of the restaurant while guests tuck in to the dishes that are priced at around 12 euros ($14). The walls are covered with pictures of famous Syrians, such as the late poet Nizar Qabbani and Moustapha Akkad, best known for producing Halloween horror films.

Ahmad Mahayni, who migrated to Germany from Syria in 2014, is already a regular with his wife and young children and loves the concept.

“It is the same for German people,” he says in fluent German. “When they move to another country, like Hong Kong, for example, they crave the food from home.”

Rules for Thee Not for Me: Chicago Mayor's Security Team Gets Traffic Fines Dismissed

In Front of US Flag, Jon Voight Warns of Biden Presidency: 'Trump Is the Only Man That Can Save This Nation' 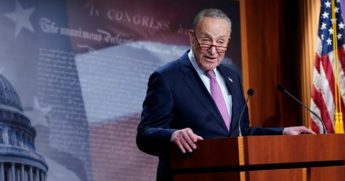