If You Encounter This Colorful Bug You Should Kill It Immediately and Then Report It, Officials Say

U.S. District Judge William H. Pauley III made the disclosure as he agreed to release in several weeks some court documents related to the search warrant that authorized last April’s FBI raids on Cohen’s home and office. Media organizations had requested access to the records.

Pauley said some documents should stay secret because making them public could jeopardize aspects of its investigation, “including those pertaining to or arising from Cohen’s campaign finance crimes.”

In December, Pauley sentenced Cohen to three years in prison for crimes including tax evasion, fraud, lying to congress and campaign finance violations that occurred when two women were paid to stay silent about affairs they claimed to have had with Trump.

The judge authorized disclosure of portions of materials related to Cohen’s tax evasion and false statements to financial institutions charges, along with Cohen’s conduct that did not result in criminal charges.

Nine media organizations had cited high public interest and a right to access in requesting the records.

The judge gave prosecutors until the end of the month to identify portions of the documents that should stay secret.

In his decision, Pauley made revelations about the search warrants as he explained his reasoning on why only some search warrant materials can be released and only with redactions.

The judge said prosecutors had opposed the media requests, saying disclosure “would jeopardize an ongoing investigation and prejudice the privacy rights of uncharged third parties.” He said they provided the search warrant materials for the judge to privately review.

He said the search warrant applications and affidavits supporting them “catalogue an assortment of uncharged individuals and detail their involvement in communications and transactions connected to the campaign finance charges to which Cohen pled guilty.”

Pauley said prosecutors revealed to him that “these individuals include those cooperating with the Government, those who have provided information to the Government, and other subjects of the investigation.”

He said the search warrants do not detail the Government’s ongoing investigation as much as other documents including affidavits, but they “enumerate topics of inquiry relating to the campaign finance charges.”

The judge added: “At this stage, wholesale disclosure of the materials would reveal the scope and direction of the Government’s ongoing investigation. It would also unveil subjects of the investigation and the potential conduct under scrutiny, the full volume and nature of the evidence gathered thus far, and the sources of information provided to the Government.”

Cohen pleaded in August to two campaign violations and other crimes.

Cohen, in his plea, said that it was all done with the knowledge and at the direction of a “candidate for federal office” — meaning Trump. But whether Trump or anyone else involved with those transactions broke the law remained an open question.

News organizations in the legal action to unseal the documents included The New York Times, The Associated Press, and the parent companies of ABC and CBS News, CNN, the Daily News, The Wall Street Journal, Newsday and the New York Post.

David E. McCraw, vice president and deputy general counsel for The New York Times, said: “We are pleased that the court has rejected the Government’s position that the public has no right to see these important and newsworthy materials. While we don’t know how extensive the court-approved redactions will be, we are confident that the release of materials will shed light on the investigations involving Mr. Cohen.”

Pauley called the public’s right to access the materials substantial and said the materials are “entitled to a strong presumption of public access.”

Maybe it's a glitch, or maybe it's part of a broader scheme to 'unperson' anyone who doesn't agree with the Biden administration.
By Christine Favocci  September 22, 2021

The Squad's anti-Semitic sentiments are well-known and they seek to do everything they can to abandon and isolate Israel.
By Elizabeth Stauffer  September 22, 2021

Politico reported that some files from Hunter Biden's purportedly abandoned laptop have been verified - nearly a year after they were released.
By Kipp Jones  September 22, 2021

'The Petito and Schmidt family are demanding that you remove Gabby Petito’s picture from your Yelp page,' the letter read.
By Dillon Burroughs  September 22, 2021

A YouTuber had no trouble getting Californians to sign a petition they thought would replace Republicans with illegal immigrants.
By Kipp Jones  September 22, 2021

Sen. Cotton: The World Is Laughing at the United States After Biden's UN Speech

'A lot of the world sees Joe Biden and just laughs at the statement he made yesterday,' Arkansas Sen. Tom Cotton said during the interview.
By Dillon Burroughs  September 22, 2021

Bill Gates Squirms, Then Deflects as Interviewer Presses Him on Connection to Jeffrey Epstein: 'He's Dead, So ...'

Bill Gates was squirming on the hot seat when the name of Jeffrey Epstein was mentioned during a recent interview.
By Jack Davis  September 22, 2021

Maxine Waters Called Out for Pushing Debunked Lie About Border Patrol, Then Having the Nerve to Blame Trump

Anyone who cared to learn the truth about the latest charges against the Border Patrol could have. For Maxine Waters, the truth is irrelevant.
By Joe Saunders  September 22, 2021

'All a woman has to do is claim she is pregnant and she will be released. They’re asked to please report to immigration within 60 days.'
By Dillon Burroughs  September 22, 2021 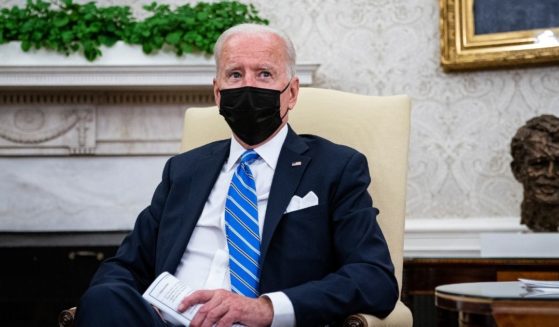 Congressman Officially Introduces Articles of Impeachment Against Biden: 'He's Done So Much Damage'

GOP Rep. Bob Gibbs co-sponsored three articles of impeachment against Biden, saying the president has 'done so much damage.'
By Kipp Jones  September 22, 2021