White House Will Send Afghans to Cities Across the US, Refugees to Be Granted Thousands for Things Like Furniture and Silverware

Hat Tip: Hunter Biden's Art Dealer Could Be Cozier with the First Family Than Anyone Thought

EDMONTON, Alberta (AP) — The Edmonton Oilers appear to have shored up their defense under new head coach Ken Hitchcock.

Mikko Koskinen made 24 saves in his third shutout of the season and Connor McDavid scored the only goal as the Edmonton Oilers defeated the Calgary Flames 1-0 on Sunday.

“It takes a lot of effort to play good defense, especially against a team like that that has so many skilled, offensive players,” Oilers defenseman Adam Larsson said.

“I think we’re playing a little tighter, and it’s easier to close the games. Even when we were up two goals in the beginning of the season, we would tend to give up chances still, even when we tried to close games out. I don’t feel like we’re doing that now.”

The Oilers have won three straight and have gone 6-1-0 in their last seven games.

“I like how we stayed with it when we got an early lead. We didn’t try to flex out. We got quality chances in the first period from playing the right way,” said Hitchcock, who owns a 7-2-1 record since taking over for Todd McLellan.

“I like the way we protected the lead in the third period, especially. That to me is where we’re learning how to play as a unit of five, not spread out. That’s a good sign.”

The Flames had a five-game winning streak snapped, and are 9-2-1 in their last 12 outings.

“I’m not happy with the result, but I am happy with our weekend,” said Flames head coach Bill Peters, whose team defeated Nashville 5-2 on Saturday. “It just looked like we were running on fumes a little bit tonight.”

David Rittich made 29 saves in a losing effort for Calgary.

“It’s always the worse kind of loss, a 1-0 game,” said Rittich. “We didn’t play our game. We just need to be better than that.”

Edmonton got going 12 minutes into the opening period with some nice passing by the top line. Alex Chiasson fed McDavid at the side of the net and the Oilers’ captain sent his 16th goal of the season past Flames goalie David Rittich.

The Oilers came out flying in the second, but Rittich made huge breakaway saves on Ryan Nugent-Hopkins and Leon Draisaitl.

Calgary looked to have tied it up midway through the middle period, but Anthony Peluso was flagged with goaltender interference on Koskinen after the video review.

Related:
Whale Species Among the Rarest Marine Mammals in the World Is Losing Its Population

McDavid came close to adding another goal on the power play with four minutes left in the third, but rang his shot off the crossbar.

NOTES: It was the second of four meetings between the Alberta rivals with Calgary scoring three third-period goals in a come-from-behind 4-2 victory on Nov. 17. . The Flames were without a couple of key players as forward Mikael Backlund is out with a concussion, while defenseman Mark Giordano was serving part of a two-game suspension for kneeing Minnesota’s Mikko Koivu.

Oilers: At Colorado on Tuesday.

Location
New York City
Whale Species Among the Rarest Marine Mammals in the World Is Losing Its Population
Moderna Pushes for Children Ages 6 to 11 to Take the COVID Vaccine
Supreme Court Rejects Plea to Reimpose Death Penalty on Inmate Charged with Rape and Murder
Three Sisters Share the Same Birthday, But There Is a Twist
VP Harris to Meet with French President as Biden Admin Tries to Salvage Its Relationship with France
See more...
Advertisement

Hat Tip: Hunter Biden's Art Dealer Could Be Cozier with the First Family Than Anyone Thought

Given the family's history of corruption, there is every reason to believe buyers will be getting a little more than just a piece of art.
By Elizabeth Stauffer  October 25, 2021

'What would happen if we run out of this, patients can't get important chemotherapy - and without that chemotherapy they could die.'
By Samantha Chang  October 25, 2021

Texas Senators Blast Biden Admin Over Denial of Border Crisis: 'It Is a Federal Responsibility'

The letter came after the Biden administration denied a request by Gov. Greg Abbott last month to provide an emergency declaration.
By Dillon Burroughs  October 25, 2021

As William Shatner Breaks Record by Traveling Into Space, Fellow Actors Blast Him for Woke Reasons

Shatner's spaceflight this month made the 90-year-old actor the oldest man to visit space - but some weren't celebrating the achievement.
By C. Douglas Golden  October 25, 2021

Angry Father: Woke School Tied a Mask to the Face of My Disabled Daughter for Weeks, Never Told Me

'Medically, she could aspirate. She could asphyxiate, all sorts of medical things that could happen,' the father said.
By C. Douglas Golden  October 25, 2021

Appearing on CNN's 'State of the Union,' the House speaker was asked about whether she'd seek re-election.
By C. Douglas Golden  October 25, 2021 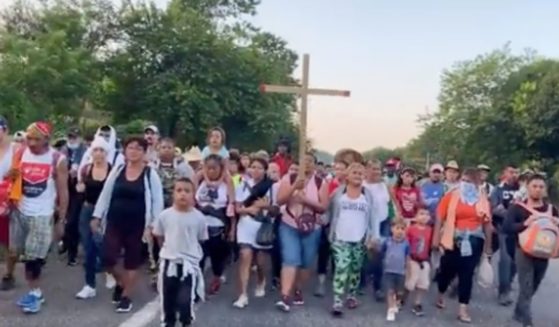 Fox News correspondent Griff Jenkins posted a video on Monday morning of the large group of migrants walking along a Mexican highway.
By Dillon Burroughs  October 25, 2021