While many state and local governments nationwide are mandating that citizens wear masks amid the coronavirus outbreak, many of those mandates come with exceptions.

Some areas that have mandated facial coverings, for example, offer exemptions for those with health issues or other problems that might preclude them from covering their face.

The mandates, and the exemptions, have done little to unite those in favor of forcing masks onto people and those who believe that the wearing of a mask should remain a personal choice.

Americans are divided on not only the legality of the mandates, but the efficacy of masks.

It is a complicated issue with health, constitutional and privacy questions that will probably set precedents for years to come.

In the interim, Americans are digging in on their respective sides of the debate, and the mandates do not appear to be going anywhere.

Some nationwide retailers like Walmart have mandated that their shoppers wear face coverings — on Wednesday, Walmart announced a mandate that takes effect on Monday. And due to government mandates, some local businesses are required to ask their patrons to do the same.

One business, located in north-central Arkansas, is having a bit of fun with its mandate, and its owners are brilliantly using medical privacy laws to their advantage.

The business owners are also leaving little doubt about where they sit on the forced mask debate.

Ford’s Guns & More in Batesville, Arkansas, is adapting after the city voted in favor of mandatory masks Tuesday.

It didn’t take the owners of Ford’s Guns & More to react to the decision, and also to point out that its customers could still technically make their own decisions about whether or not to wear a mask when entering the store. 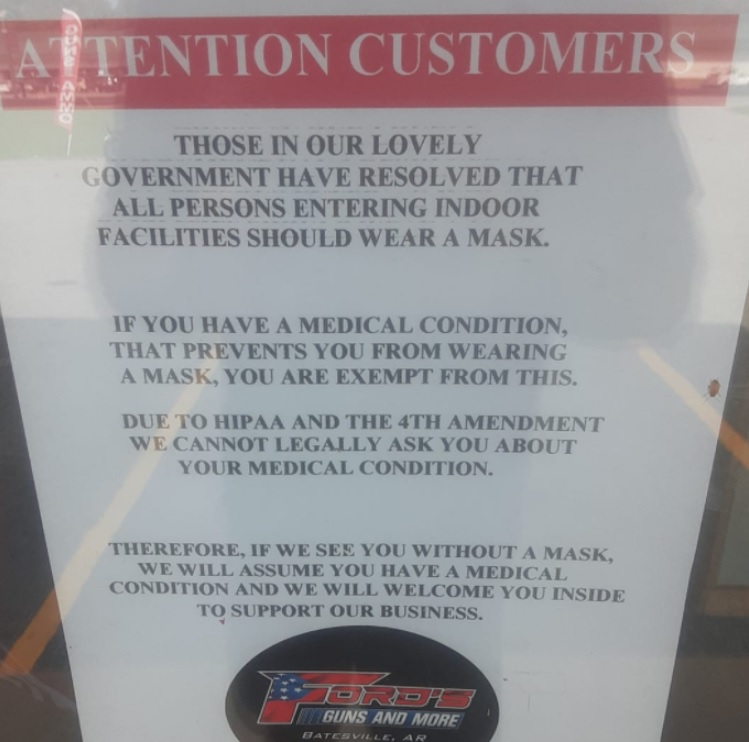 A sign on the store reads, “THOSE IN OUR LOVELY GOVERNMENT HAVE RESOLVED THAT ALL PERSONS ENTERING INDOOR FACILITIES SHOULD WEAR A MASK.”

“IF YOU HAVE A MEDICAL CONDITION THAT PREVENTS YOU FROM WEARING A MASK, YOU ARE EXEMPT FROM THIS,” the sign adds. “DUE TO HIPAA AND THE 4TH AMENDMENT WE CANNOT LEGALLY ASK YOU ABOUT YOUR MEDICAL CONDITION.

The sign concludes, telling customers: “THEREFORE, IF WE SEE YOU WITHOUT A MASK, WE WILL ASSUME YOU HAVE A MEDICAL CONDITION AND WE WILL WELCOME YOU INSIDE TO SUPPORT OUR BUSINESS.”

In a climate in which masks are being mandated, and in a country where medical privacy laws are enforced, there is a natural loophole here — one that theoretically could apply well outside of Batesville, Arkansas.

People must wear masks, government says, unless they have a medical condition.

At the same time, asking someone about a medical condition is an area that can lead to its own troubles.

Those operating Ford’s Guns & More saw the loophole, and they don’t appear eager to turn away customers.

The business describes itself as a “Small, country type, Friendly, down to earth gun shop” on Facebook, adding: “Nothing fancy here but we try to do our best to make our customers happy.”

With a sense of humor, a good selection of ammunition posted online and the choice of personal freedom, it’s difficult to see how those customers could leave the store in any state other than contentment.