Unseen Hero: As Cops Let Shooter Terrorize School, 1 Mom Sneaked in, Rescued Her Kids, Got Out Without Shooter Knowing

Remind us again: Who are the tolerant people in American politics?

Singer, actress and offensively outspoken liberal Bette Midler brought a new urgency to that question with a tweet Wednesday that openly praised the man who assaulted Kentucky Sen. Rand Paul in a neighborhood dispute in 2017.

From her post — which was published Wednesday night but apparently deleted Thursday morning — Midler obviously disagrees with Paul’s take on President Donald Trump’s decision to withdraw U.S. forces from northern Syria, which opened the door for a Turkish military incursion against Kurdish groups that had fought with the United States against the Islamic State group.

Paul supports Trump, and in a podcast on Wednesday, he even called the Kurds “ingrates” for their treatment of U.S. troops after Trump’s decision was announced, according to ABC News.

Reasonable people can disagree with Trump’s decision, which stunned many of even Trump’s biggest backers.

Trending:
Unseen Hero: As Cops Let Shooter Terrorize School, 1 Mom Sneaked in, Rescued Her Kids, Got Out Without Shooter Knowing

Some leaders in the conservative movement, like author and talk show host Mark Levin, were outraged. Some Trump supporters on Capitol Hill, like Sen. Lindsey Graham, were opposed but have been changing course.

But for liberals like Midler, a political dispute is reason enough to praise a man who physically attacked a United States senator.

Midler’s tweet was apparently deleted while this article was being written, but here’s a screen shot of it from the website Twitchy.com. 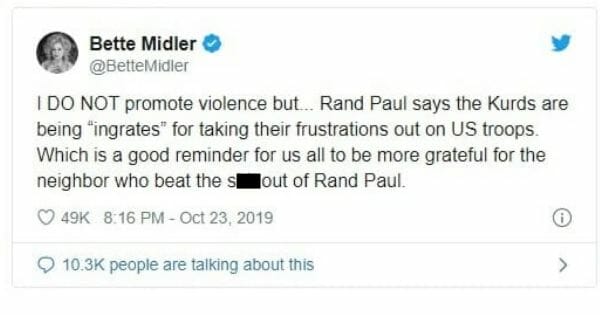 Just to be clear, Midler was calling on Americans to be “grateful” for a man who tackled Paul from behind, breaking six of his ribs and causing injuries so bad that doctors had to surgically remove part of a lung.

But liberals are the ones who need to be protected from conservatives?

Plenty of social media users pointed out the hypocrisy that was obvious in Midler’s own words.

Well, being grateful for violence can be said to promote violence, but whatever…..

Related:
If GOP Takes Senate, Fauci Will Be in a World of Trouble, Rand Paul Says

Even some liberals couldn’t take it.

But this one summed it up perfectly:

So much love and tolerance from our friends on the left. Thank you for demonstrating yet again why you can never be trusted with power.

Liberals like Midler can talk all day about tolerance and freedom of speech, but any honest look at American politics over the past few years will show that the most intolerant voices are coming from the left.

The movement to squelch free speech on social media is coming from the left.

Most of the violence against Americans with different political beliefs is coming from the left.

But it’s the increasingly leftist Democratic Party that wants Americans to hand over the powers of the executive branch in the 2020 presidential elections?

While the attack on Paul was apparently unrelated to politics, it’s pretty clear that for liberals like Midler, political violence is perfectly acceptable, even as they claim not to “promote” it.

Midler’s post was a great reminder of where the really dangerous intolerance is in American politics. And that’s exactly what Americans need to remember when they head to the polls next year.

She can delete it, but that doesn’t mean it will be forgotten.

The reported shooting plan, which was meant to also include IEDs, was broken up after intervention by law enforcement.
By C. Douglas Golden  May 27, 2022

Unseen Hero: As Cops Let Shooter Terrorize School, 1 Mom Sneaked in, Rescued Her Kids, Got Out Without Shooter Knowing

'They were just standing outside the fence. They weren’t going in there or running anywhere,' the mother said of police.
By C. Douglas Golden  May 27, 2022

Op-Ed: This Week Elites in Switzerland Set the Stage for a Cashless Society and 1 World Government

Two powerful globalist bodies are meeting to advance ideas and proposals that would place enormous authority in fewer hands.
By Steve Miller  May 26, 2022

Wayne Allyn Root: We're in the Middle of the Biggest Get-Rich-Quick Scheme in History and COVID's Just a Small Part

If we allow the tyrants who did this to us to remain in office, it will start all over again. It will never end.
By Wayne Allyn Root  May 26, 2022

Op-Ed: Don't Be Fooled by Elon Musk's Plan to Vote GOP - He Is Not a Conservative

Many conservatives are convinced that Musk is one of their ilk. In reality, he is squarely in the leftist camp.
By Judson Phillips  May 26, 2022

The Pentagon is preparing to supply Ukraine with two rocket launcher systems that could turn the tide of the war.
By Richard Moorhead  May 26, 2022

'One Miracle After Another': Teen Set to Graduate After Life-Threatening Car Accident and Brain Injury

The fact that Stephen is alive and will be able to receive his diploma is a blessing the family doesn't take for granted.
By Amanda Thomason  May 26, 2022

If all goes well, in four months the little calf named 'Cinder' will be big enough to release back into the wild.
By Amanda Thomason  May 26, 2022

Escalon recounted, based on surveillance video footage, that the gunman discharged multiple rounds soon after entering the school.
By Randy DeSoto  May 26, 2022
Next