Apparently, if you’re not happy with Joe Biden and you show up at one of his rallies, you must be a GOP mole.

That’s the (likely incorrect) takeaway Biden had from a comic protester at an event in North Liberty, Iowa, on Saturday, all because the man pointed out what everyone kind of knows — Biden’s nobody’s first choice, but he’s the choice you come up with when you’re convinced he’s the guy who can beat Donald Trump.

If you believe the Iowa City Press-Citizen’s coverage of the event, it was all perfectly normal. There’s a lot of pictures of the smiling Democrat front-runner shaking a lot of hands and looking very presidential. All in all, it looked like a successful event.

However, QuickTake by Bloomberg posted a few more, ahem, interesting videos of the event in which it was clear that things didn’t go quite as smoothly as Biden backers had hoped.

Here’s one featuring a gentleman wondering why his wife left him:

Iowa voter: “My wife recently left me. She’s divorcing me. What can I do to get her back?”

“I’m beginning to see why your wife left you,” Biden finally declared at one point during the exchange, which he otherwise handled well.

Then, a guy with a mock “Settle for Biden” T-shirt got up and walked out of the event.

“I just want to say that you’re a fine candidate, and I’m planning on settling for Biden in 2020,” the man said.

“I think we should all settle for Biden. I think you could be the Hillary of 2020.”

The man got a cascade of boos and even Biden joined in on it.

“I’ll tell you what, man,” Biden said. “I thought they were exaggerating when the Republicans said they were sending out 80 people to participate in the Democratic caucus here.

Check it out on a Bloomberg YouTube video here. (The same men pranked Massachusetts Sen. Elizabeth Warren, too.)

“Joe Biden: He’ll literally take your shirt off your back.” That’s a campaign slogan the wealth-tax crowd could actually get behind.

As Uncle Joe is wont to do, he didn’t exactly get it totally right. Yes, the guy was obviously a troll. No, he wasn’t from the GOP, or even apparently from a conservative outfit.

According to the Washington Examiner, the individuals involved were almost certainly from a comedy duo called The Good Liars — which, with a name like that, are unsurprisingly Democrat partisans.

Here’s the header image on the duo’s Twitter account, which has a blue checkmark despite having fewer followers than the kind of crowd you would think would show up at a Canadian Football League preseason game: 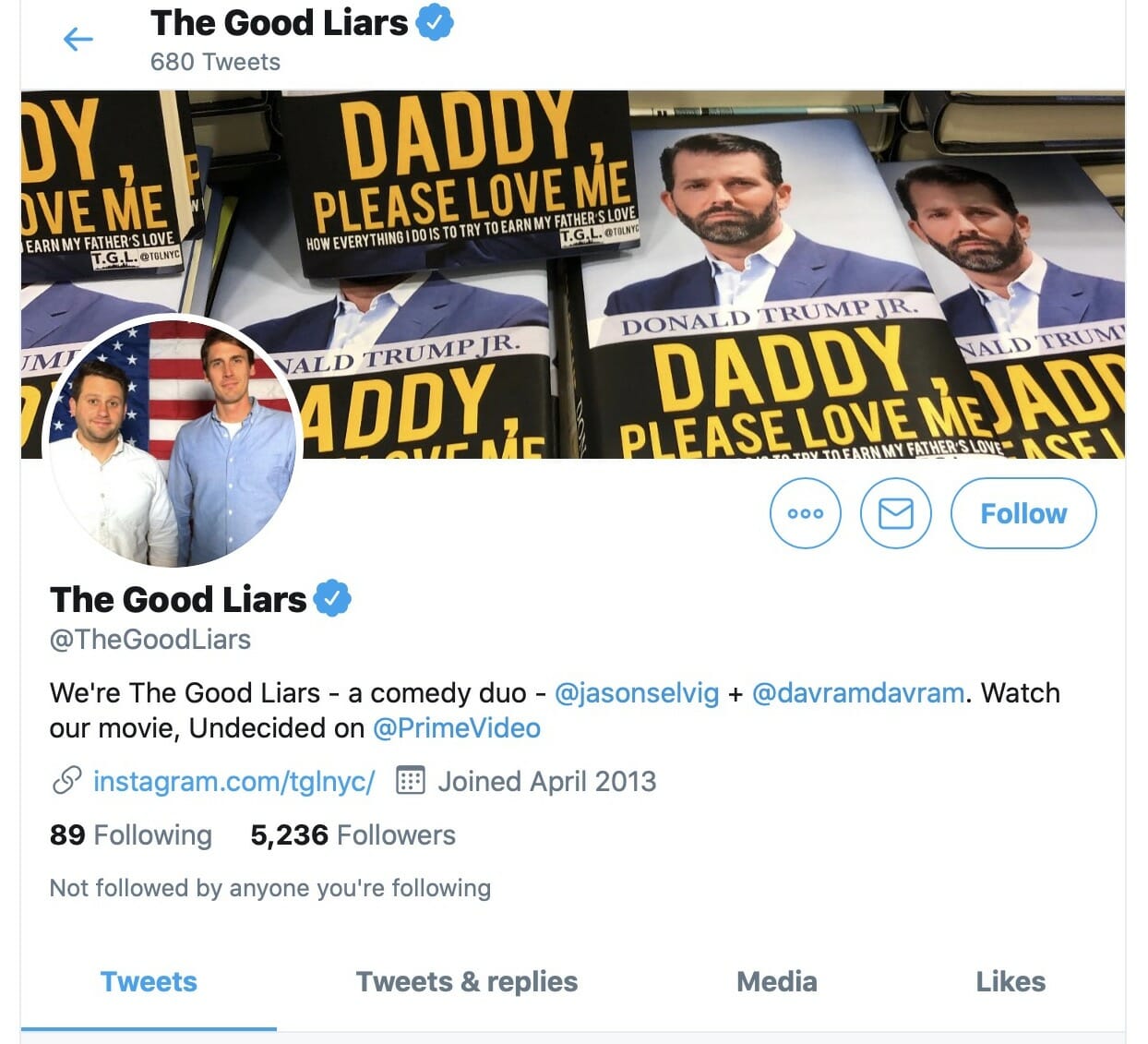 Yes, they’re hawking Donald Trump Jr.’s tome, “Daddy, Please Love Me.” Just in case you didn’t get the gist of this, here’s their take on Rudy Giuliani:

After watching @RudyGiuliani’s recent television appearances we decided to put this sign up at Fox News. #CrazyRudy pic.twitter.com/btAfKEARbV

So I’d say that, if anything, these guys are more the Bernie Bro type.

This isn’t the first time that Biden has managed to get into a situation with Iowans who weren’t there to fawn over him, either.

Perhaps the most infamous was when a man of a certain girth challenged the former vice president over Hunter Biden at an event in New Hampton, Iowa in December. CNBC reported that the man was an 83-year-old retired farmer; Biden called him “a damn liar” and challenged him to a pushup contest before saying “look, fat, look, here’s the deal.”

Biden would later claim he said “facts,” which sounds every bit as true as the claim that Massachusetts Sen. Elizabeth Warren is a full-blooded member of the Cherokee Nation.

So, is there a moral to this, other than that it’s funny?

Well, yes. First, due to the nature of Iowa’s caucus system, going out there and being chummy with the locals — even when they’re giving you a hard time — is exceptionally important. Run-ins with groups like the Good Liars are the sorts of things you shrug off. Biden won’t.

Iowa isn’t usually critically important — Trump lost it in 2016, after all, a loss that probably had something to do with the fact that his campaign style simply didn’t mesh with how the caucuses roll.

Biden has actually jumped into second in the RealClearPolitics polling average in the state, partially because former South Bend, Indiana, Mayor Pete Buttigieg and Warren, now third and fourth, have seen minor implosions in their likability in the state.

That said, polls in the caucuses are notoriously difficult to gauge, and if Biden ends up placing third or fourth, he goes on to New Hampshire where he’s again a very tenuous second, according to RealClearPolitics averages.

In short, it’d probably be good for Biden not to screw up Iowa at this late hour.

Second, this says a lot about Biden that he automatically thinks it’s only the Republicans who are after him.

After all, most of the Democrats aren’t exactly enamored of him, either. His huge lead in the polls nationally is mostly gone and the only saving grace is that Sanders, whom the party would unite against en masse if he got anywhere close to the nomination, is second in the national polling average by less than 4 points.

Either way, most Democratic voters outside of Biden’s hardcore bases in the black community and white working class look at him as the kind of guy you settle for after the one you really wanted got away. And that’s assuming these voters want to settle down with Biden. None of the other candidates’ fan bases think too highly of the guy — which is problematic when you realize that’s one of the reasons Hillary Clinton lost to Donald Trump.

For now, those serious issues can wait and we can all have a good laugh at this whole mess. The only way this could be better is if this guy started his spiel with, “look, hair-plugs, look, here’s the deal…”

A district official said the teen felt ill early in the first quarter, so he "took himself out of the game, then collapsed near the bench."
By Lorri Wickenhauser  February 2, 2023
Next