Trump Wanted the American People to See the Truth About Docs - Then the FBI Came for Them: Former WH Official

Speaking virtually with General Motors CEO Mary Barra on Thursday during a roundtable with business and labor leaders to promote the Democrats’ “Inflation Reduction Act,” Biden referred to himself as “vice president.”

Although he immediately caught his error, the damage had been done.

“I’ve spoken to the chairwoman about the possibility of my being able to buy one of those Corvettes that are electric vehicles that — you know, when they come out. And I’m not going to be able to do it because I can’t drive a vehicle while I’m vice president,” Biden said.

He quickly added, “While I’m president, any more than I could when I was vice president.”

Some might say we should cut the president some slack because of his recent COVID-19 diagnosis — and had this been an isolated incident, they would be right. But this is far from the first time he’s gotten his own job title, or those of others, wrong.

Speaking to South Carolina primary voters in February 2020, he said, “My name is Joe Biden. I’m a Democratic candidate for the United States Senate.”

He did not correct himself.

Amusingly, one commenter wrote: “Thank God. I thought he was running for president. What a relief.”

Addressing a group at a White House event in May, Biden referred to himself as the nation’s first senator from Delaware instead of the first president from Delaware. According to the New York Post, he said, “There have not been many of the senators from Delaware. It’s a small state. As a matter of fact, there has never been one. And so I want to take advantage of making sure I introduce [a fellow Delaware native].”

He also has repeatedly referred to Vice President Kamala Harris as the “president.”

From the moment Biden launched his presidential campaign in April 2019, there were signs he lacked the cognitive capacity he’d possessed throughout his long political career. Yes, he was well-known for making colossal gaffes, but he’d always been able to speak to people extemporaneously and fluidly.

In the two years he’d been out of the spotlight, his ability to communicate had diminished noticeably. Biden had begun to lose his train of thought and to stumble over and even slur his words. It wasn’t his age. (He will be 80 in November.) Most of us have known 90-year-olds who are as sharp as tacks.

Although many Democrats still dispute that the president’s verbal struggles are a sign of his deteriorating mental health, his White House handlers have been caught trying to micromanage his every public appearance.

One of their most notorious efforts to hide his decline came in June when a camera happened to catch a small notecard in Biden’s hand. An enlargement of the photo showed the card contained a series of instructions for him to follow, such as “YOU take YOUR seat.”

Next time someone tries to tell you Joe Biden isn’t a geriatric nursing home patient trapped in the White House, show them this.

He needs a notecard with step by step directions telling him what to do, including “YOU take YOUR seat”.

This is beyond embarrassing. pic.twitter.com/GRMbgpcrEq

For over a year, Republican Rep. Ronny Jackson of Texas, who served as the White House physician during the Obama and Trump administrations, has called on Biden to submit to a cognitive test, just as former President Donald Trump did.

At this point, Biden’s cognitive function is comparable to a child’s. He has NO IDEA where he is, what he’s doing, or what he’s saying. HE CAN’T EVEN READ OFF A TELEPROMPTER! This is tragic. Biden needs to resign or the cabinet needs to step in. This has gone TOO FAR!

Why does the media continue to cover for Biden’s cognitive decline? It’s UNDENIABLE he’s too far gone. America is being DESTROYED because of Biden’s lack of mental faculties, and the media is 100% COMPLICIT in the cover up!

I have ZERO confidence that Biden has the cognitive ability to represent us on the world stage. If he needs a notecard on how to sit in a chair, HOW can we trust him in complex negotiations in the Middle East? America is FALLING APART!

How much longer will Democrats and the legacy media continue to pretend there’s nothing wrong with this man? Nearly every public appearance ends with a gaffe. His slurring of words has become more pronounced, and he often devolves into gibberish.

Biden’s condition has become too big for the White House to hide. Americans should demand he submit to a cognitive test right away. 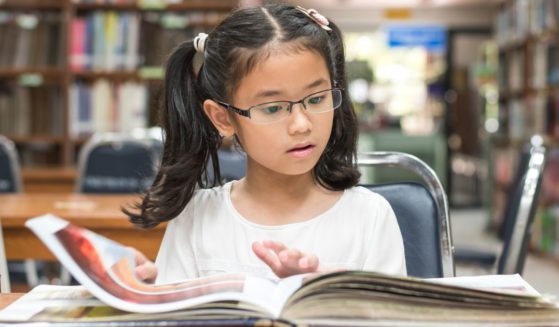 The report lists books that feature 'indecent and offensive material' aimed at children from 12 months to 8 years old.
By Reagan Reese  August 12, 2022