Watch: Reporter Tells Network On Air Her Plans to Expose Them Through Project Veritas

Trump Just Announced His New Spokesperson Will Be a Familiar Face 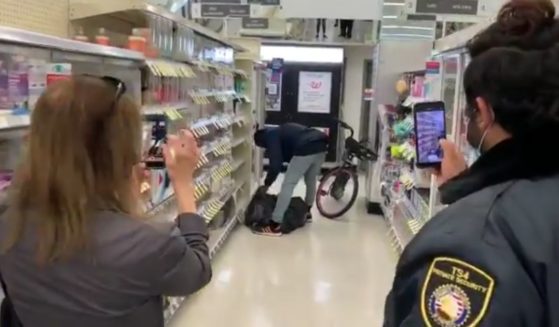 Security Guard, Workers Stand By as Man Shoplifts from Walgreens in San Francisco

Brian Stelter’s “Reliable Sources” is under fire for a less-than-reliable guest during a segment on climate change Sunday.

The guest on the CNN show was Genevieve Guenther, seemingly there to lend her expertise on global warming. In a clip of the show posted to Twitter, she revealed an “unsettling” statistic.

If you’re quicker with math than a supposed climate expert, you’ll notice those numbers don’t even add up to 100.

Trending:
Pilot Hid Note in Cockpit of Plane as Fleet Was Grounded in March 2020, Now We Know the 'Very Chilling' Sight He Was Greeted With

Poor math seems to be only the beginning of the problems putting Guenther at odds with the show’s promise of reliable sources. In fact, her educational background is more centered around Shakespeare than greenhouse gasses.

her Ph.D. is in Renaissance literature 🤣

A “reliable source” who isn’t a climate scientist. I wouldn’t even call her proficient in climate science even as a layperson. She’s a doctor of literature.

Holy crap, @brianstelter is nothing but a complete joke!

Modern environmental science appears more like a circus than an actual field of study. With representatives like Al Gore, it’s tough to get important research taken seriously.

The spokesmen and women aren’t the only problem with the “save the earth” movement, either.

For some, environmental activism seems to be more of a rallying cry against Christian values than a deep concern over the health of the Earth. Practitioners of Gaianism fully embrace this.

Explained by Gaianism.org, the religious philosophy is one “that grants the living Earth (Gaia) its rightful place in the center.”

Even those with a cursory knowledge of Christianity can see the problem here. God is the rightful center of all things.

Our planet is a comparatively small rock floating through an unfathomably expansive universe. This rock isn’t the center of creation. In fact, Earth isn’t even the center of our own solar system.

Looking for God in inanimate objects has been a human flaw from the beginning. The Holy Bible makes God’s law on this very clear, with Exodus 20:3 saying, “Thou shalt have no other gods before me.”

One of God’s first commands listed in the Bible is not for man to worship the earth, but to multiply and “subdue” it (Genesis 1:28).

This is tempered by a respect for God’s creation held by many Christians. Sportsmen employ this in the field, not harvesting more game than they or their family can use. Fishermen do the same in their trade, working to take care of the resources with which God blesses them.

Most have struggled with idolatry in their lives. Whether it’s choosing money, others or the environment over God, the Bible shows this has been a problem since time immemorial.

Thankfully, the solution is plain for all to see.

Christians know salvation can be found in only one place, and it’s not an environmental rally. As Jesus declares in John 14:6, “I am the way, and the truth, and the life; no one comes to the Father, but through Me.”

Security Guard, Workers Stand By as Man Shoplifts from Walgreens in San Francisco

Moran seems to have forgetten that if it were not for Republicans taking a stand four years ago, there would be no filibuster today.

What Did COVID-19 Really Teach Us About Capitalism?

Progressives have been looking for a reason to end capitalism, but they are ignoring the fact that the free market helped end the pandemic.

Video: When Its Owner Is Taken Away by First Responders, Loyal Retriever Chases After Ambulance

As the ambulance took off for the hospital, the unnamed dog ran along behind it, determined not to let its owner make the trip alone.

President Biden was speaking in Brussels on Tuesday with European Union leaders when the brain malfunction occurred.

An election official from Fulton County, Georgia, revealed on Wednesday that chain of custody documents for ballots had reportedly been lost.

Man Dumps 80,000 Pennies on Family's Lawn as Child Support - So They Donate It

Sickal also revealed in comments on her post that the money her ex had delivered had been short the amount needed.

A Bureau of Land Management official is allegedly using her position in the Biden administration to further her former employer's goals.

It's a tale of shocking violence aimed at innocent victims, but don't expect this story to dominate the mainstream media.

Democratic Wisconsin Gov. Tony Evers had declared a public health emergency in March 2020 in response to the COVID-19 pandemic.