On May 9, 2018, a desperate Crowell flagged down Nix, who was in his patrol car, because her infant son, Kingston Crowell, was not breathing.

Crowell saved the baby’s life that day, and ever since, the families have been inseparable.

Crowell and her son met Nix’s wife, Nikki Nix, and the families got together to celebrate Christmas last year and Kingston’s first birthday in January. They also regularly get together for playdates.

As their relationship strengthened over time, Crowell asked Jeremie and Nikki to be Kingston’s godparents.

Reflecting on the past year, Nix believes he was meant to meet the Crowell family.

“I think it was a God thing,” Nix told WESH-TV.

“I think it was the right place, right time and being put in that position for the right reason.”

Crowell recalled the dramatic day when her son was revived at a Florida hospital after Nix rushed him there in his patrol car.

“I remember dropping to my knees and just screaming, ‘Thank God!’ I could breathe!” Crowell said.

“Like we were kind of attached from the moment it happened. He just said, ‘I’m not leaving your son, until I know he’s OK’ and it’s just been him and Nikki since,” Crowell said.

The unlikely friendship has cultivated a shift in worldviews for both families.

Crowell now sees the humanity behind the uniform, and Nix has developed a better understanding of what it is like for a single mom to struggle to raise a child, work full-time, and strive towards her nursing degree.

“So, it’s opened a door to have conversations and create new relationships and friends that we would have never had before,” Nix said.

“And so he has another family that can teach him a lot more and we can all work together. You know, no matter color, race, whatever, it’s just, you see genuine love.”

Nix is excited to see what is in store for little Kingston, who has come to adore Jeremie and Nikki.

“God’s got a great plan for Kingston and he’s got great things in store for that little guy that we were able to set on the right path that day,” Nix said.

Kim Davis
Contributor
A graduate of Grand Canyon University, Kim Davis has been writing for The Western Journal since 2015, focusing on lifestyle stories.
@liftable_writer
Kim Davis began writing for The Western Journal in 2015. Her primary topics cover family, faith, and women. She has experience as a copy editor for the online publication Thoughtful Women. Kim worked as an arts administrator for The Phoenix Symphony, writing music education curriculum and leading community engagement programs throughout the region. She holds a degree in music education from Grand Canyon University with a minor in eating tacos.
Birthplace
Page, Arizona
Education
Bachelor of Science in Music Education
Location
Phoenix, Arizona
Languages Spoken
English
Topics of Expertise
Lifestyle & Human Interest
Beloved Actress Betty White Dead at 99
Charles the Cheesehead? Turns Out the Prince Even Eats It for Breakfast
10-Month-Old Gets Heartwarming Celebration from Hospital Staff After Finishing Chemotherapy
Cop Gets Shocking Surprise When He Finds Age 5 Boy Behind Wheel of Car Who Had Plans To Go Buy Lamborghini
Watch: Cops Save Helpless Stray Cat Found with Head Stuck in Soup Can
See more...
Advertisement

Nick Freitas has grown tired of politicians acting like kindergartners on the playground. He's is not taking it anymore.
By Jack Gist  January 27, 2022

It's Not Just Congress: GOP Poll Shows How Badly Biden Is Dragging Dems Down in State-Level Races

Midterm elections are rarely good for the party in the White House. But President Joe Biden's performance is hurting Dems far outside DC.
By Joe Saunders  January 27, 2022

Canada has taken yet another step toward authoritarianism by banning citizens from entering stores without showing proof of vaccination.
By Warner Todd Huston  January 27, 2022

The group departed from Vancouver for Ottawa on Sunday, and it is protesting the vaccine mandate for truckers who travel across borders.
By Grant Atkinson  January 27, 2022

A woman exposed to lab monkeys is now experiencing symptoms that have prompted a warning letter from the CDC.
By Grant Atkinson  January 27, 2022 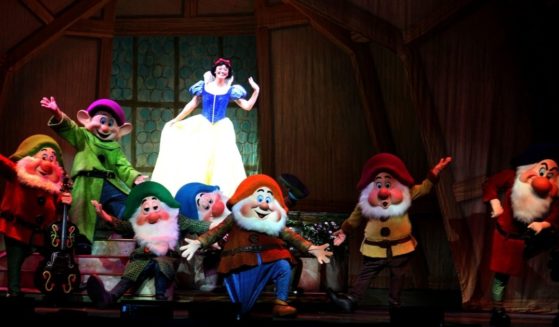 Disney identified seven problems with the classic "Snow White and the Seven Dwarfs" and is now taking steps to make a woke new reboot.
By Jared Harris  January 27, 2022
Next