Hearts from across the world are going out to people who have spent months planning their weddings, only to find out that they have to cancel or postpone them because of the coronavirus pandemic.

One Canadian couple, Joshua and Anastasija Davis, expected their wedding to suffer the same fate; however, they were pleasantly surprised Sunday after a small living-room ceremony with immediate family members.

Their closest friends and family had gathered together in the streets to celebrate the love between the two, giving them a wedding day they will never forget.

“It was unreal. It was magical and so special. We could not stop crying as it meant the world to us having them all there,” Anastasija told The Western Journal. “We are still so speechless.” 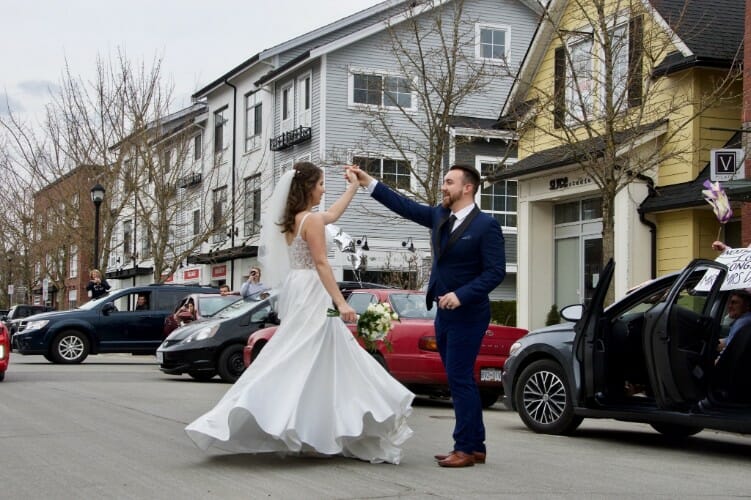 Josh and Anastasija dancing in the street at their surprise wedding. (Courtesy of Anastasija Davis)

Anastasija and Josh spent five-and-a-half months planning their wedding, which was originally scheduled to be celebrated on April 3 with 135 guests.

They had spent the previous months dreaming about their special day and their 11-day Caribbean cruise honeymoon.

Little did they know their wedding day would be even more magical than they had dreamed.

After the coronavirus outbreak began to prove that it wasn’t going anywhere for quite some time, guests began canceling their RSVP’s. Anastaija’s brother and his wife, who were supposed to help with the wedding decorations, were trapped in Europe due to the travel ban.

Because of all of the hiccups, the couple decided they needed to plan a smaller wedding with fewer than 50 guests.

As the outbreak began to worsen, Anastasija and Josh grew concerned about the potential health risk to their wedding guests, no matter how many or few might show up. They decided it was not worth subjecting the people they love to such potential.

“We had made the hardest decision of our live to cancel april 3 wedding, message all of our friends and just get married on Sunday (march 22, 2020) in the living room with the immediate family that we have been in contact with for the last little while – as that would prevent the risk,” Anastasija told The Western Journal in an email.

Anastaija added that the decision process tried their faith in ways they never expected.

“When everything – absolutely everything; all your plans, money, decisions and etc just slowly fall apart into million pieces it becomes hard to trust God,” she wrote. “It becomes hard to realize that God is still at work and that there will be a breakthrough.

“In the midst of all of this we had still continued to trust in God, we continued to pray for a miracle, for guidance, wisdom and peace.”

After their small ceremony on Sunday, she and Josh left the living room to take wedding photos at another location.

Their friends, however, had something better in mind for them.

As their car turned the corner, all of their loved ones began cheering and honking their horns at them in celebration of their big day.

Their friends lined the street in cars decorated with ribbons, balloons and posters, one reading: “Nothing stops love. Congrats Mr. & Mrs. Davis!”

The newlyweds even had their “first dance” as husband and wife watched by those most special to them, which was something they had deemed impossible in this time of isolation.

Anastasija told The Western Journal that they were “shocked” and “amazed” at their friends’ and family’s grand gesture. 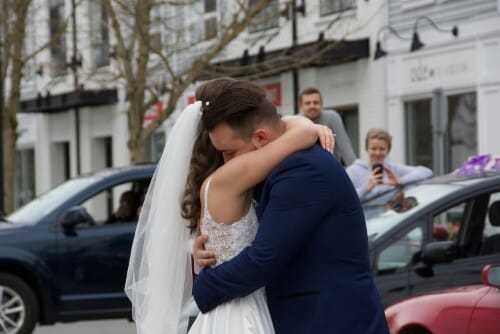 Anastasija and Josh Davis were ‘shocked and amazed’ when they saw their friends lined up on the street. (Courtesy of Anastasija Davis)

“We are so grateful for this. Words cant describe how special our wedding was,” the bride later wrote on Facebook. “We had planned for one wedding, yet God had planned another one for us and we could only say that what He has planned for us turned out to be a million times better than what we had planned or wanted.”

Anastasija told The Western Journal that their surprise wedding day was a direct answer to their prayers.

“A wedding that would be shared across the world and give people hope and joy and that is exactly what we want to do,” she said. “None of this credit goes to us as we havent planned anything of this, but that is why we know that God was in control of it all from day one.

“His plans for us had become better than what we have imagined or asked for,” she added, citing Ephesians 3:20.

She also said that although she and Josh had originally discussed postponing the reception so that they could celebrate with their friends and family, they decided that their surprise wedding was so special that they wouldn’t want to replace that moment with anything else.

“After having all of our friends join us on our day – it made it absolutely perfect and we would not be wanting to “re-do” our wedding in any way.”

The Western Journal’s Kayla Kunkel also contributed to this report.

CORRECTION, April 4, 2020: When originally published, this article incorrectly stated that Josh’s brother had been stuck in Europe because of travel restrictions, when it was in fact Anastasija’s brother who was unable to travel. We have corrected our statement and apologize for the error.