After bouncing around the nether regions of the media landscape since she left CBS in 2011 — her last major gig was with Yahoo’s streaming division, which is the mainstream media’s version of the direct-to-video movie — Couric has decided to write a tell-all called “Going There.” It manages to earn the title.

In the book, Couric admits to sabotaging the careers of other female journalists and anchors because she felt threatened.

She said Martha Stewart needed “some healthy humbling (prison will do that … ) to develop a sense of humor.”

In short, “Going There” has taken Couric from unemployed to very unemployable, and the book hasn’t even come out yet.

As if to put a finer point on the matter, the latest leaked anecdote from the forthcoming tome regarding an interview with Supreme Court Justice Ruth Bader Ginsburg manages the impressive feat of infuriating both the right and the left simultaneously.

According to a Monday piece from the Daily Mail, Couric said she selectively edited her 2016 sit-down interview with Ginsburg to omit the liberal icon’s scathing remarks directed at athletes who knelt during the national anthem, ostensibly in the name of “protecting” her.

The interview was done for Yahoo News in October 2016. At that point, two careers were in the process of terminal decline.

One was Couric’s, as she had gone from CBS News to ABC News to the news division of the MySpace of search engines.

The other was that of then-San Francisco 49ers quarterback Colin Kaepernick, who’d placed himself in the midst of a media maelstrom by choosing to kneel during “The Star-Spangled Banner” in protest of American-centric injustice; it didn’t help that the controversy this created occurred concurrently with a precipitous decline in the quality of Kaepernick’s play.

However, other athletes joined Kaepernick and anthem-kneeling became A Thing™ in the fall of 2016, albeit as a phenomenon far more controversial than it is five years later. It was against this backdrop that Couric asked RBG what she thought of the athletes kneeling for the anthem.

The interview as published made it clear that Ginsburg wasn’t a fan. “I think it’s really dumb of them,” she said.

“Would I arrest them for doing it? No,” the justice continued. “I think it’s dumb and disrespectful. I would have the same answer if you asked me about flag burning. I think it’s a terrible thing to do, but I wouldn’t lock a person up for doing it. I would point out how ridiculous it seems to me to do such an act.”

Couric went further, asking: “But when it comes to these football players, you may find their actions offensive, but what you’re saying is, it’s within their rights to exercise those actions?”

However, according to the Daily Mail, Couric revealed in “Going There” that Ginsburg — the most far-left justice to have ever sat on the high court bench by almost any metric — went even further, saying athletes like Kaepernick were showing “contempt for a government that has made it possible for their parents and grandparents to live a decent life.”

“Which they probably could not have lived in the places they came from … as they became older they realize that this was youthful folly. And that’s why education is important,” Ginsburg said.

Couric said that while she tried to keep her “personal politics” out of her journalism (do try to stifle your laughter as you read that), she was a “big RBG fan” and felt the remarks were “unworthy of a crusader for equality” like Ginsburg.

She decided to leave the remarks out, obviously. Couric’s reasoning? Ginsburg was “elderly and probably didn’t fully understand the question” and racial justice was a “blind spot” for her. The justice was 83 at the time and died four years later.

Much like every other anecdote we’ve heard Couric share in her upcoming memoir, this makes the former “CBS Nightly News” anchor look nowhere near as good as one imagines she thinks it does.

First, yes — in 2021, the suggestion that athletes kneeling for the national anthem to protest vague notions of injustice is disrespectful to the country, to those who have sacrificed for it and to the fans whose expenditures pay their salaries is widely considered heretical and reactionary. In 2016, however, that was not the case.

In fact, as late as 2018, 54 percent of respondents to a Wall Street Journal/NBC News poll said kneeling for “The Star-Spangled Banner” was “not appropriate.”

Couric’s memory, one might say, is as selective as her editing; it’s not too much of a leap to assume she wasn’t “protecting” Ginsburg so much as she was protecting her own opinion. If one of the country’s leftist heroines was willing to go as far as to say anthem protests show “contempt for a government that has made it possible for their parents and grandparents to live a decent life,” maybe it wasn’t Ginsburg who had the “blind spot.”

It’s also worth noting that nowhere in the Yahoo interview (or other contemporaneous sit-downs) did the justice come across as unduly “elderly” — and her response made clear the excuse Ginsburg “probably didn’t fully understand the question” is silly. For that matter, if RBG really were in such a state of decline that she couldn’t properly comprehend the question and Couric was “protecting” her, why was the interview published at all?

The likely answer is that Couric believes none of her own excuses. In this case, her “personal politics” couldn’t allow her to let conservatives have the pleasure of Ginsburg pointing out the obvious when it comes to anthem protesters. She published a narrative, not the news.

It’s worth noting this revelation will have the added bonus of further enraging progressives still unhappy with Ginsburg for not retiring in 2014 when the Democrats had the White House and the Senate.

Her death in September 2020 led to Amy Coney Barrett’s ascension to the high court. After the Supreme Court refused to block Texas’ abortion law, that led to tweets like this one from writer Nandini Balial: 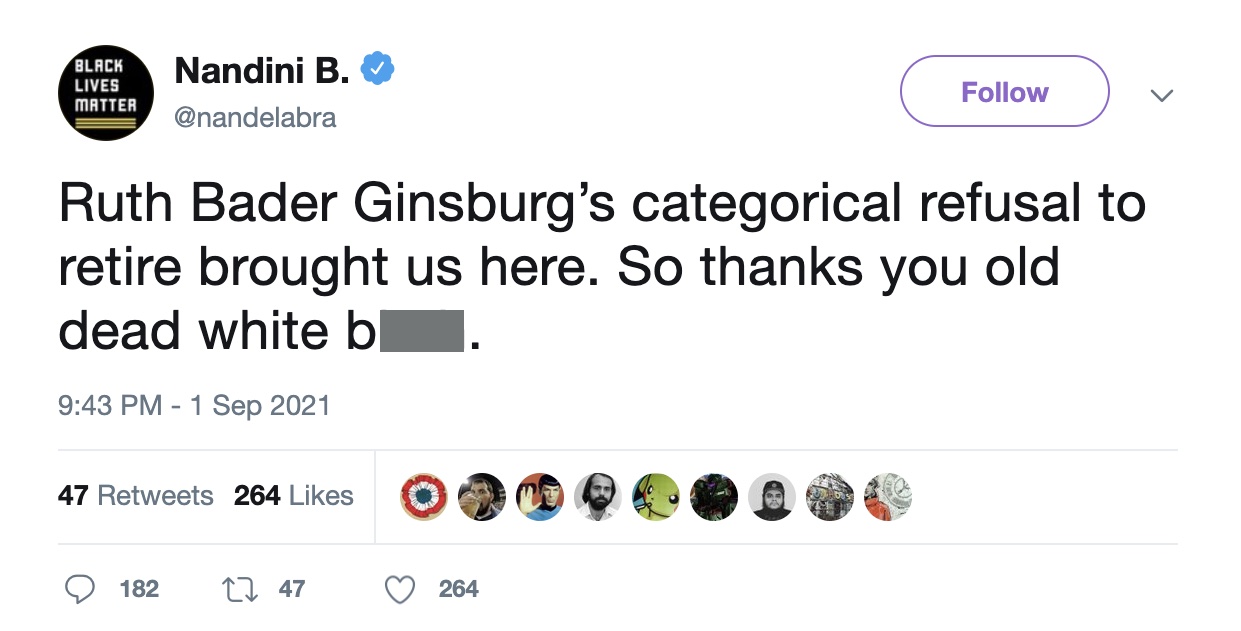 Hey, speaking of “dumb and disrespectful.”

Whatever the case, Couric’s memoir is shaping up to be one of the great media miscalculations of recent years, a self-sabotaging tell-all that spills plenty of dirt — and almost all of it about Katie Couric.

She killed the careers of other female journalists because she felt threatened by them. She admits to engaging in “metaphoric” sex acts to get scoops. And now we know she selectively edited an interview when RBG made too much sense.

At this rate, by the time “Going There” is released on Oct. 26, Katie Couric might not even be able to get a gig on TikTok.

The woman was believed to have died Jan 3 because an employee was unable to feel the woman's pulse and didn't see any signs of breathing,
By Elizabeth Delaney  February 3, 2023

Liberals are up in arms after someone unearthed a video of Mr. Rogers addressing gender in a way that today would get him labeled a bigot.
By Warner Todd Huston  February 3, 2023

George Santos is under investigation for allegedly taking thousands of dollars donated in an attempt to save a dying dog.
By Jack Gist  February 3, 2023

Billionaire funder of leftist causes George Soros was given a five-word title that completely suits him for a number of reasons.
By Michael Austin  February 3, 2023

This is a condescending ploy many Democrats -- including Hillary Clinton, Barack Obama and AOC -- have used to pander to voters.
By Samantha Chang  February 3, 2023

The Biden administration has no plans to shoot down a spy balloon from China that is drifting over Montana.
By Jack Davis  February 3, 2023

As if low ratings were not enough, a reported eruption of temper by Don Lemon has cast a long shadow over the new CNN morning show.
By Jack Davis  February 3, 2023

The Satanic Temple has decided to use Valentine's Day as an opportunity to chide Pro-Life folks by opening an abortion clinic in New Mexico.
By John McCann  February 3, 2023

The late-night host had Lindell appear inside an arcade claw machine filled with stuffed animals, but it didn't go the way he expected.
By Richard Bledsoe  February 3, 2023
Next