The former Secret Service agent and conservative commentator is known for his outspoken ways — not holding back on hot-button topics such as the Black Lives Matter movement or the corrupt FBI investigation of former National Security Advisor Michael Flynn.

But when it came to the appalling attack by liberal social media users over the weekend on the daughter of a McAllen, Texas, police officer who was murdered in an ambush Saturday, even Bongino’s words seem to fail him in sheer revulsion at the topic.

“The population of imbeciles right now is so ridiculous.”

Trending:
Watch: Farmers May Have Figured Out Exactly What's Causing the Egg Shortage - Was This Intentional?
Advertisement - story continues below

It’s beyond embarrassing — or ridiculous. It’s a sign of how far into depravity liberals in this country have actually gone.

Bongino was reacting to the case of the daughter of Ismael Chavez, 39, the police officer who was shot to death Saturday with his partner, Officer Edelmiro Garza, 45.

Their killer, identified as Audon Ignacio Camarillo, 23, shot himself at the scene.

Chavez’s 18-year-old daughter, Savannah, posted a moving tribute to her father on Twitter.

“[W]ords cannot describe the pain I’m in, but I’m glad my dad is at peace,” she wrote. “you were an amazing man and anyone who came across you knew that. I’m going to miss you so much. you died doing what you love most, you died a hero. i love you, daddy, see you soon.

And she added the hashtag #bluelivesmatter with a blue heart. 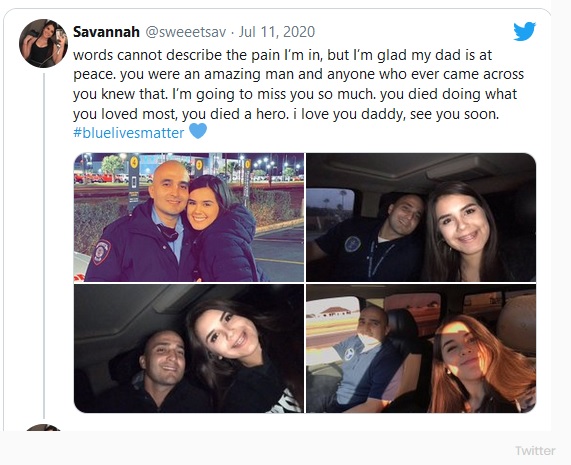 Considering they were the words of a grief-stricken young woman who was expressing her emotions on the same day her father died in the line of duty, it would be nice to think even the most anti-police progressives might treat her with some respect.

But this is 2020 — the year of Black Lives Matter and anarchy and murderous rage against police officers across the country.

Many on the left reacted with vicious, ugly responses to the 18-year-old’s tweet — which eventually led her to delete it.

“Sorry for ur loss. BUT BLUE LIVES DONT EXIST,” one person tweeted, following up by saying, “actually im not sorry. ACAB” — which stands for “All Cops Are Bastards.”

Here’s one of the more polite responses Heavy.com captured in a screen shot:

That kind of callousness is what Bongino was talking about — people who think being “woke” means they don’t owe an iota of respect to a grieving teen because it doesn’t suit the political moment.

“The population of imbeciles right now is so ridiculous,” Bongino told “Fox & Friends.”

“Think about this. … I get a text on my phone right here, I’m not kidding, a couple times a year with the NYPD from a friend of mine that says someone I knew or someone who I knew knew someone else [who] was either dead or shot,” he said.

“Now everyone listening, imagine that’s your job, just for a second, please to all the imbeciles who thought it would be a great idea to attack this woman. …

“You can’t imagine that, thank God you don’t have to imagine that,” he said. “That’s what cops do, not you. So think about that when you attack this woman.”

Give Bongino credit for civility in a moment when righteous rage would have been fully justified. It’s difficult to imagine the level of malicious hatred a human soul would have to sink to in order to have the audacity to mock a grieving young woman or lecture her about the political correctness of her hashtags on literally the day she’s mourning her father’s death.

Savannah posted another tweet without the “offensive” hashtag and got plenty of support:

Ignore all these people that pretend to be woke and tough behind their phone. Mourn your father and honor him in how you live.

Your dad is watching over you from heaven, without a doubt. This wicked world has failed you. Our Lord will not. I can’t imagine your pain. Your family is in my prayers.

This one described the attackers perfectly.

If you want to see how depraved & wicked some people can be look at some of the replies to this girls posts who just lost her father who was a police officer. I thank ur dad for his service & am so incredibly sorry for ur loss. I can’t imagine. He was a hero. Praying for y’all.

“Depraved” and “wicked” might sound old-fashioned, but it’s tough to find better words for some leftists’ behavior here.

This wasn’t an enemy of the United States who died – like the Iranian terror Gen. Qassem Soleimani. This was an American police officer who was lured into his death because he and his partner were answering a call for help.

Even the most radical leftists should be able to put politics aside for a moment and let the man’s daughter grieve in peace.

Their failure to do so wasn’t just “dumb” or the work of “imbeciles.” It’s a sign of the active malice that motivates the left today — a poison just as deadly as the virulent racism of the past that liberals claim to be fighting again.

It’s toxic to the nation’s increasingly toxic political life, but liberals are apparently as indifferent to that as they are to a young woman’s feelings upon learning of the death of her father.

And it’s a warning about exactly what kind of forces are at work in the country today — and trying to win back the presidency in November.

“Population of imbeciles,” Bongino called it.

For a change, a man who’s normally over the top didn’t go nearly far enough.

"It truly takes a community, and you all have certainly shown us how powerful ours is -- thank you so much."
By Josiah Upper  January 27, 2023

Kevin Hart said a near-fatal car accident made him pause and realize what really matters.
By Elizabeth Delaney  January 27, 2023

Man Allegedly Tries Selling Stolen Car on Facebook, Gets Caught in the Act When Cops Try to Buy It

Police say 28-year-old Stevon Gordon wanted to get rid of a stolen vehicle in the dumbest way possible. It didn't go as planned.
By C. Douglas Golden  January 27, 2023

The poor dog was dropped off on the streets by herself after allegedly being taken from her family's home.
By Amanda Thomason  January 27, 2023

'We'll hand them over to for-profit companies who don't have to be subject to public records act laws, or open public meeting rules.'
By C. Douglas Golden  January 27, 2023

An uproar has begun after a man was fined and forced to move along because he prayed outside of an abortion clinic.
By Jack Davis  January 27, 2023

The world’s first worm dating back 220 million years, has been unearthed in Arizona. It’s a “missing link” in evolution – shedding fresh light on the origins of amphibians. Named […]

Adults predict they could only go without their phone and TV for just five hours – while they could manage three days without a laptop or tablet. A UK study […]

Georgia Gov. Brian Kemp has issued an order allowing the National Guard to be called up if violence erupts again in Atlanta.
By Jack Davis  January 27, 2023

The sculpture might be the most feminine of the statues sitting atop the courthouse, but that's not what causes it to stick out so much.
By Josiah Upper  January 27, 2023
Next