While diving off the coast of Florida, a man named Mario experienced a close encounter of the octopus kind he will not soon forget.

Mario explored a diver’s paradise off Delray Beach. With opportunities to view tropical fish such as trumpetfish, trunkfish, angelfish, butterflyfish, and blue tang, as well as coral and other invertebrates, the wonders of creation are on full display.

Mario discovered this when he spotted a camouflaged octopus.

As he inched closer, the octopus abandoned stealth mode and unleashed its secret weapon: ink.

The diver seemed visibly confused. The octopus succeeded in evading him, leaving only a dark wispy cloud where it once hid.

This was the creature’s intention exactly. The camouflage trait is a unique defense mechanism which allows an octopus to escape predators that are almost certainly faster than they.

The ink, known as cephalopod ink, is a combination of melanin and mucus. Most animals related to octopi, including squid, are also able to produce and use ink.

The purpose of the ink is twofold. When the cloud is released, it often remains in a rough shape thanks to its mucus component.

In murky or dark water, this shape looks like the octopus itself. Using the thick and obscuring property of the ink, the octopus is able to escape with an effective smokescreen tactic. 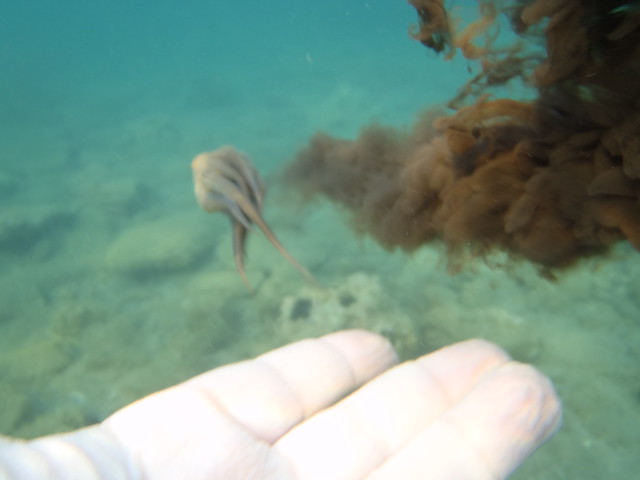 For a nearly boneless and slow animal with no other defenses, ink is literally a lifesaver.

But not all octopi are reliant on ink. Some, such as the blue-ringed octopus, possess tetrodotoxin, an extremely potent neurotoxin. Tetrodotoxin is 1,000 times more powerful than cyanide.

Even a small scratch from this octopus could cause death in a strong adult. This species is native to Australia.

Mario was fortunate to be vacationing in Florida instead. This amount of curiosity in the land down under could have placed him in a morgue rather than a viral YouTube video.

What do you think of this interaction between diver and nature?

What do you think of this interaction between diver and nature? Scroll down to comment below.