“The Deplorables” show is making its next stop on its national tour in the Phoenix, Arizona, metropolitan area in January 2020, promising to bring laughter and fun that pro-Trump conservatives will enjoy.

In an exclusive interview with The Western Journal, comedian and political commentator Terrence K. Williams, who is headlining “The Deplorables,” observed that the mainstream media ignores a large portion of America.

“They ignore conservatives, deplorables, Trump supporters, so me and a few other comedians … decided to go on tour and bring some entertainment to the conservative world,” he said. 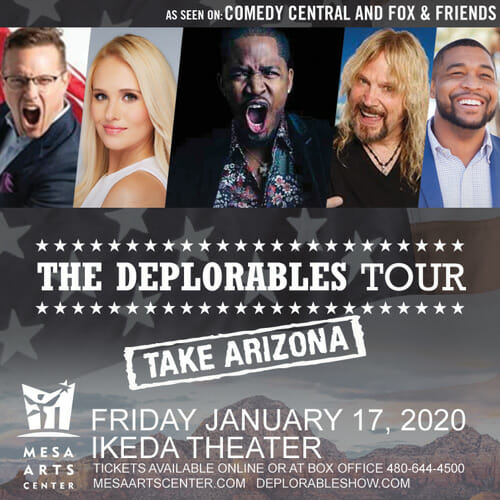 The first venue for 2020 will be the Mesa Arts Center in Mesa, Arizona, about 20 miles east of downtown Phoenix, on Jan. 17. Mesa has been ranked the most conservative city in America.

Joining Williams on the stage will be comedian Steve “Mudflap” McGrew, who has appeared in his own special on Comedy Central and on Sirius XM.

THE DEPLORABLES ARE COMING TO PHOENIX ARIZONA!

Yes It’s okay to wear your red hat at the show!

I can’t wait to join the stage with the wonderful @TomiLahren! Also @bennyjohnson @TheOfficerTatum & Steve Mcgrew

Tatum, who hails from Arizona, told The Western Journal what he most likes about the show is that like-minded “patriots get to come together” and enjoy each other’s company, while having a good time.

He described “The Deplorables” as “good, clean conservative entertainment that you won’t be able to find anywhere else.”

Williams recounted that the audience’s response to “The Deplorables” has been very positive.

“People are so excited,” he said. “They are so happy. They say, ‘I can’t believe that there are actually some conservative entertainers. There are some entertainers that actually love America and respect the president.'”

“The one thing I enjoy is bringing the laughter and seeing a crowd of patriotic people laugh,” Williams added. “It’s wonderful. We all deserve a laugh these days.”

Trump heralded the entertainer as a “talented, talented guy” at an event at the White House in October.

thank you @charliekirk11 for making it happen pic.twitter.com/9rbiLASYXM

Williams said he has been a Trump supporter since the billionaire businessman came down the escalator in Trump Tower in June 2015 to announce his presidential candidacy.

“I just knew that he was right for America,” Williams said. “We needed a change, a real change. We didn’t need another politician, we needed a real person. I believed that Trump was the best for that.”