The daughter of House Speaker Nancy Pelosi of California was caught spreading fake news Wednesday in the form of a fabricated quote from Trump administration Labor Secretary Alexander Acosta.

Acosta, who has been under fire for his handling of convicted sex offender Jeffrey Epstein’s case while he was a federal prosecutor in Florida, defended himself at a news conference Wednesday.

Acosta has been accused of giving Epstein, who was arrested on sex trafficking charges last week, a “sweetheart” deal by allowing him to plead guilty to lesser crimes in exchange for a lenient sentence.

“Mr Epstein was a very wealthy and important person, his friends even more so, and these girls – much as we sympathized with them – just weren’t either of those things,” Christine Pelosi wrote in a since-deleted tweet that purported to quote Acosta. 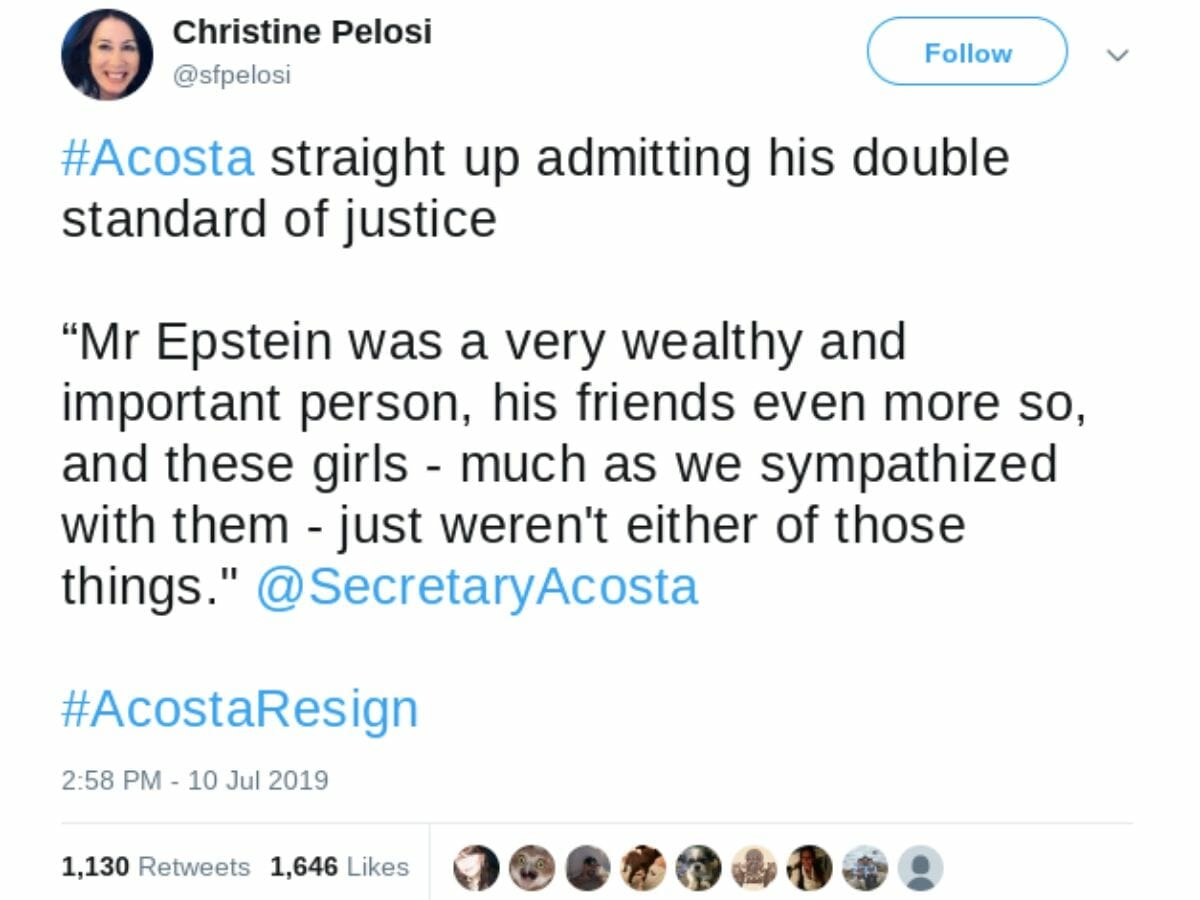 But Acosta said no such thing.

The fake quote appeared to have come from a tweet by The Atlantic’s David Frum, who acknowledged that the “sardonic comment should not have been phrased in a way that looked like a quotation.”

sorry – that sardonic comment should not have been phrased in a way that looked like a quotation, deleted.

While Frum deleted his original tweet, other pundits appeared to confirm what the source of confusion was:

David Frum first tweeted the “quote” as a sarcastic paraphrasing of Acosta. Frum deleted later when he realized people were taking it seriously. Pelosi here just cribbed a since-deleted tweet and didn’t even offer attribution.

It was from a since-deleted @davidfrum tweet parodying Acosta. Seems she just cut/pasted it.

Pelosi wasn’t the only one who fell for the fake news.

The Twitter page for the U.K. Independent also posted the fabricated quote. 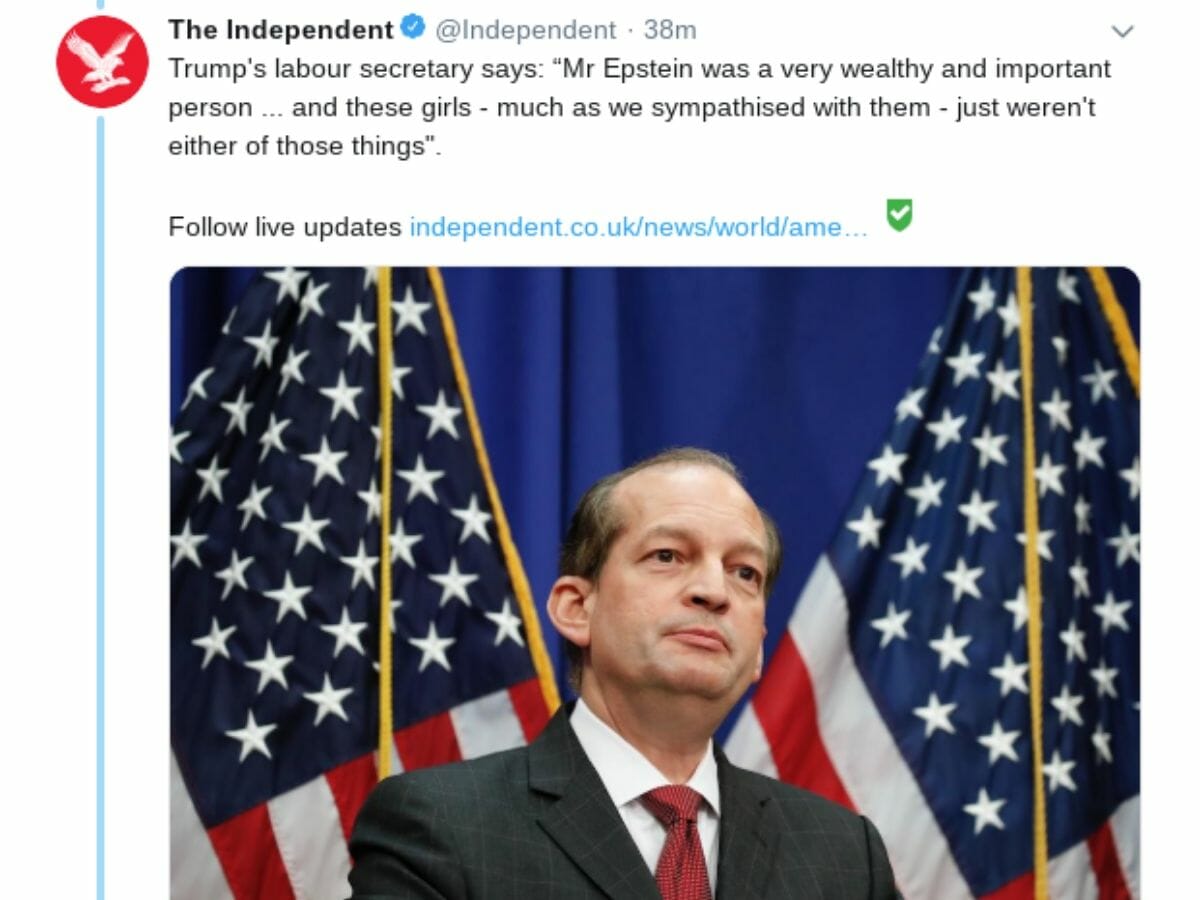 Despite some users pointing out the quote was fake, plenty of others tweeted it out as if it were fact.

how do you defend an action that the FBI has proven to be a mistake?

“Mr Epstein was a very wealthy and important person … and these girls – much as we sympathised with them – just weren’t either of those things”.

“Mr Epstein was a very wealthy and important person, his frien…

Pelosi’s tweet, before it was deleted, garnered more than 1,000 retweets.

Joe Setyon
Associate story editor
Joe Setyon is a deputy managing editor for The Western Journal who has spent his entire professional career in editing and reporting. He previously worked in Washington, D.C., as an assistant editor/reporter for Reason magazine.
@JoeSetyon
Joe Setyon is deputy managing editor for The Western Journal with several years of copy editing and reporting experience. He graduated with a degree in communication studies from Grove City College, where he served as managing editor of the student-run newspaper. Joe previously worked as an assistant editor/reporter for Reason magazine, a libertarian publication in Washington, D.C., where he covered politics and wrote about government waste and abuse.
Birthplace
Brooklyn, New York
Topics of Expertise
Sports, Politics
Liberal Activist: Trump Led So Well on CJR That Biden Has Zero Excuse for Failure
Embattled GOP Congresswoman Reveals Who Republicans Attacking Trump Are Really Insulting
Ben Carson Urges Conservatives to Stand Up for Beliefs: 'If You Fight, You Will Win'
US Senator Sends Out the Warning: This Is the Biggest Threat to the Founding Fathers' Carefully Constructed Federalist America
Exclusive: Kevin Sorbo Reveals Message Canceled 'Star Wars' Actress Shared with Him
See more...

Joe Raedle / Getty Images The Field: Who’s in Position to Lead the GOP Into 2024 and Beyond?