With former Minneapolis police officer Derek Chauvin’s fate settled for now by a jury, the attorney for George Floyd’s family is back to stoking racial divisions, this time by spreading a false report about the fatal police shooting of a teen girl in Ohio.

Right around the time Chauvin and the rest of the world were learning he had been found guilty on all charges in Floyd’s death, a black high school-aged girl in Columbus, Ohio, was shot and killed by a police officer.

The teen, 16-year-old Ma’Khia Bryant, was involved in a dust-up with others when police showed up to the scene, The Columbus Dispatch reported.

Police contended that the teen was armed with a knife and attempting to stab another girl when she was shot. Video released quickly by the department appears to back up that story for objective viewers.

WARNING: the following video contains graphic images that some viewers might find disturbing.

Bodycam footage from today’s Officer-involved shooting in Ohio shows Makiyah Bryant brandishing a knife at another woman before being shot by the officer
pic.twitter.com/uZiAcXj1R8

The video clearly shows a girl identified as Bryant lunging with a knife toward another female. We haven’t heard all the facts about what led up to that moment, but for now, there is no reason to assume that Bryant wasn’t an aggressor with a deadly weapon.

But while objective watchers of the video can plainly see that the officer who fired the fatal shot was, by every appearance, attempting to protect human life, not everyone is objective. Some have agendas that apparently blind them to fact-based judgments.

Benjamin Crump, the attorney who finds himself on the scene when seemingly any person of color dies or is wounded in an altercation with a police officer, had a different take on events. Crump, who has represented the families of numerous high-profile black Americans killed by police, described a teen who was, in his own words on Twitter, “unarmed.”

“As we breathed a collective sigh of relief today, a community in Columbus felt the sting of another police shooting as @ColumbusPolice killed an unarmed 15yo Black girl named Makiyah Bryant. Another child lost! Another hashtag,” Crump wrote in a Twitter post published at 8:30 p.m. Eastern Daylight Time, about four hours after the shooting.

He then used the hashtag: “#JusticeForMakiyahBryant.” 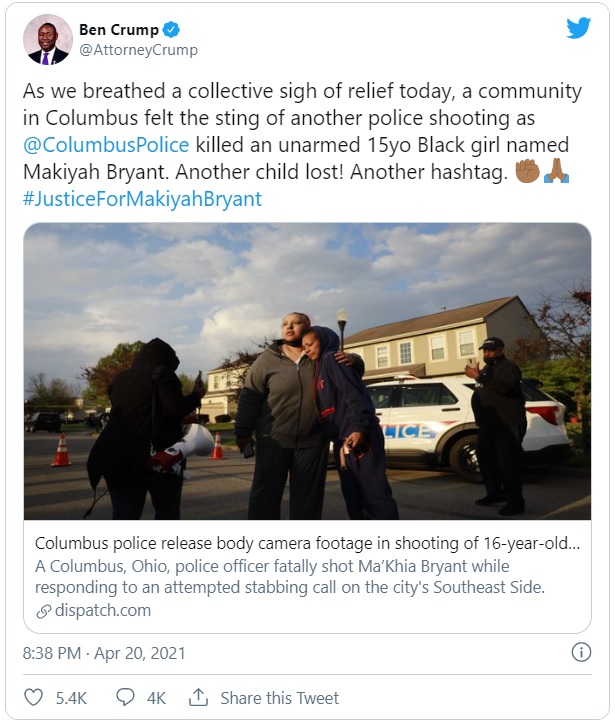 It isn’t clear where Crump got his information from, or if he hadn’t yet seen the video from police, which was made public Tuesday night. But his words were still up on Twitter early Wednesday afternoon, signaling he’s got his narrative and he intends to stand by it. (The Western Journal reached out to Crump’s office for comment on Wednesday afternoon, but received no immediate response.)

Related:
Hunter Brags About Killing and Skinning 'Wolf,' Gets Ripped to Shreds When People Realize What It Really Is

There is likely no money to squeeze from the grief of a family of someone who, at this point, appears to have been justifiably shot. The shooting of Bryant appears to be a textbook case where an officer had to make a horrendous, split-second but seemingly appropriate decision.

But the Black Lives Matter movement isn’t in business at this point to acknowledge that some officer-involved killings are what they appear, which is justified. All deaths of black Americans at the hands of police must now be immediately linked to colonial, white oppression.

Holding off on passing judgment in the death in Columbus wasn’t on Crump’s agenda, and that is reprehensible, as he has the power to influence scores of people who already hold the mistaken belief that they are victims of “systemic racism,” and a system that wants them all downtrodden or dead.

Some of them want to quite literally burn that system to the ground.

Crump on Tuesday evening had already found the entire country guilty of systemic racism with regard to Bryant’s death. Never mind that the video of her last moments appears to show that a police officer, in neutralizing her as an armed threat, might have saved the life of another black person.

As we’ve seen, time and again, only some black lives matter to the Black Lives Matter movement.

In recent weeks, The New York Times has heaped praise on 'The Woman King' for its black female protagonists.
By Michael Austin  September 27, 2022
Next