The bus creaked along a worn-out road as I stared at the Polish countryside, happy to sit. Our group had spent a long day walking the winding paths of the Jewish Quarter in Krakow.

I never noticed the bus was slowing until it had come to a stop. The driver announced our bus had broken down, and people around me slung bags and backpacks over their shoulders. We made our way back into the night and hugged our bodies as we trudged along the route to our motel

“Nazi! Nazi! Nazi!” a group of men yelled at us. They greeted us with Sieg Heil salutes, and we put our heads down and hurried across a bridge.

As a Jew, I truly had no idea that I would be spending Christmas among neo-Nazis. Our group was filled with Jewish students and young adults on an educational trip “focusing on the Holocaust experience in Poland.” In the span of seven days, we visited the German death camps Majdanek, Auschwitz, and Birkenau as well as Jewish ghettos in Warsaw, Krakow, and Lodz.

I expected the blistering cold and the horrific Holocaust sites. I did not expect open anti-Semitism. In fact, there was commerce around it.

On the morning before our bus broke down, we arrived at a plaza with a marketplace in the Jewish Quarter. There was an enclave of small stands with a wide variety of merchandise. While looking through the wares on a table, a merchant held out a button and urged me to buy it. My eyes focused on a swastika. I told the man in Polish that I was Jewish and the pin was extremely offensive. In response, he shooed me away from his table.

While stopping in souvenir shops in Krakow the next day, we found a wide variety of demeaning merchandise depicting Jewish people. Figurines of Jewish men with large noses and coins glued to their body, magnets depicting Jews as beggars, and a wooden paddle of a Jewish man who will guard your money are some of the anti-Semitic items we encountered in the market. 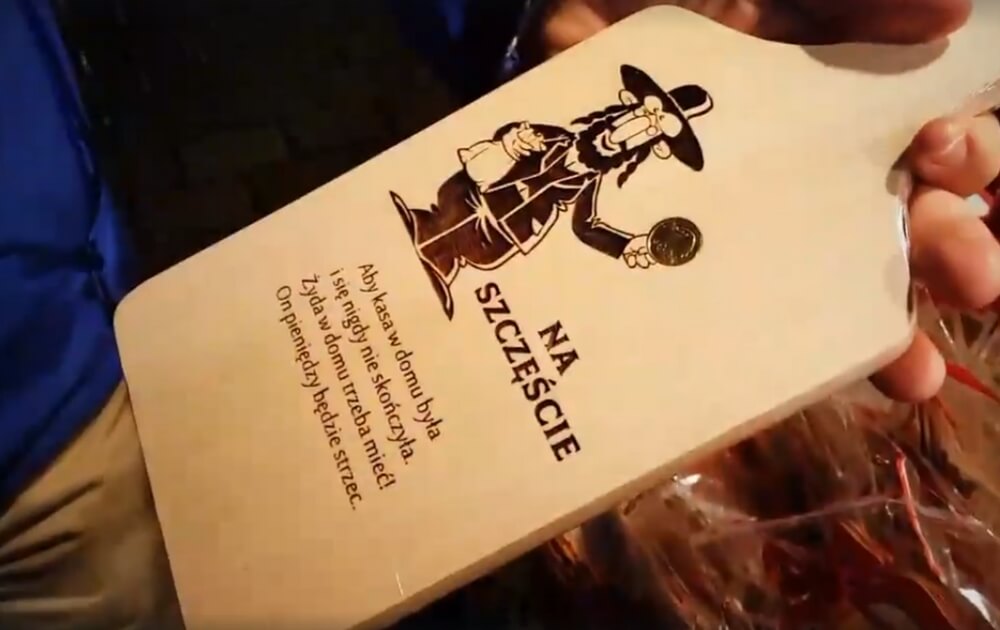 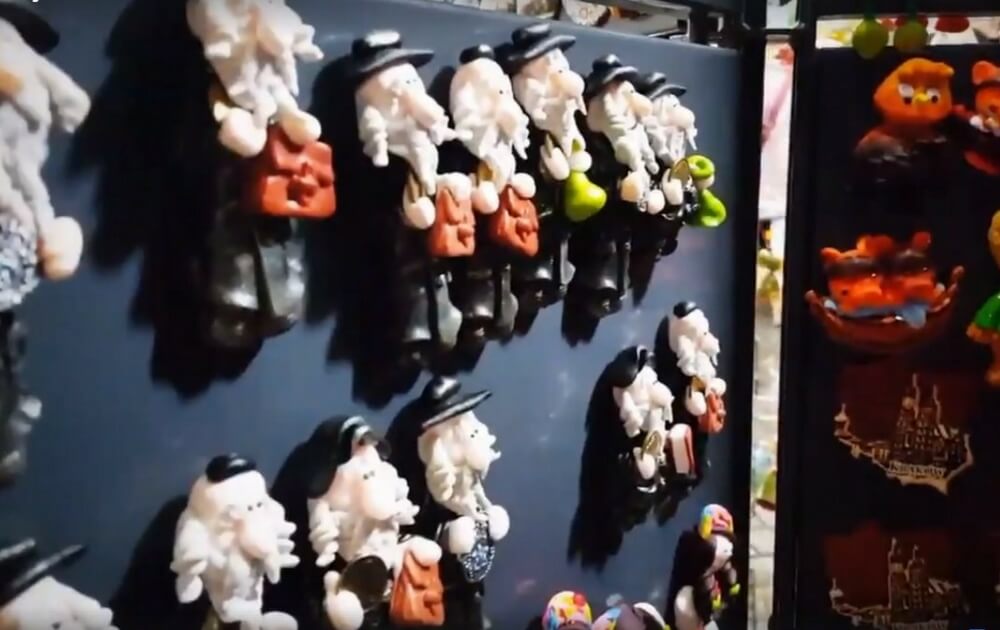 The visit to the marketplace was jarring, but the anti-Semitism we encountered was tame compared to what we would ultimately come across. As we headed back from Shabbat service in the Jewish quarter, a young man attacked Moti Leibman, a former IDF combat soldier. We had only returned from Auschwitz-Birkenau a few hours earlier, underscoring the surreal nature of the whole experience.

WARNING: THE PICTURE BELOW CONTAINS IMAGES THAT MAY BE DISTURBING TO SOME. VIEWER DISCRETION IS ADVISED.

“I felt a sharp kick in my back right as I finished tying my shoe. I stood up confused, and all I could mutter was ‘what?'” Leibman said. “The man that kicked me turned around, walked straight to me and without saying a single thing, punched me straight in the face. Shocked, I was ready to fight back and defend myself, but as I lifted my hand, this guy was held back by his friends, six men, and I had a perfect shot. In half a second, I realized, run.”

Down the same street, a passerby shoved and cursed at the wife of a rabbi and told her to leave the country. Our traveling security had the evening off for Shabbat, but there were plenty of onlookers. No one took any steps to help us.

The next day students from the trip asked security to notify authorities, but they told us that from past experience, they didn’t believe our concerns would be taken seriously. Being foreigners on a short trip, we didn’t pursue the issue further.

“I am not surprised that anti-Semitism is still prevalent and strong in Poland, but I am surprised the this occurred in the radius of the Jewish Quarter where there is a police station, and no one around seemed to care,” said Leibman.

Later that week, we traveled to the Jewish Ghetto in Lodz, 75 miles from Warsaw. Nazis forced 160,000 Jews to live in the area in 1940 while waiting for deportation. Over 70,000 Jews were deported to Chelmno extermination camp in 1942. The surviving Jewish residents in the ghetto were then deported to Auschwitz- Birkenau Death Camp in 1944.

Despite the horrific history, the Jewish ghetto still faces anti-Semitism. The picture below is a small building with the name of the Lodz soccer team, ŁKS, spray-painted on it. Over the team name is graffiti of circumcised penises, cross-outs, and Jewish stars. The team is associated with Jews due to the rich Jewish history in the area. 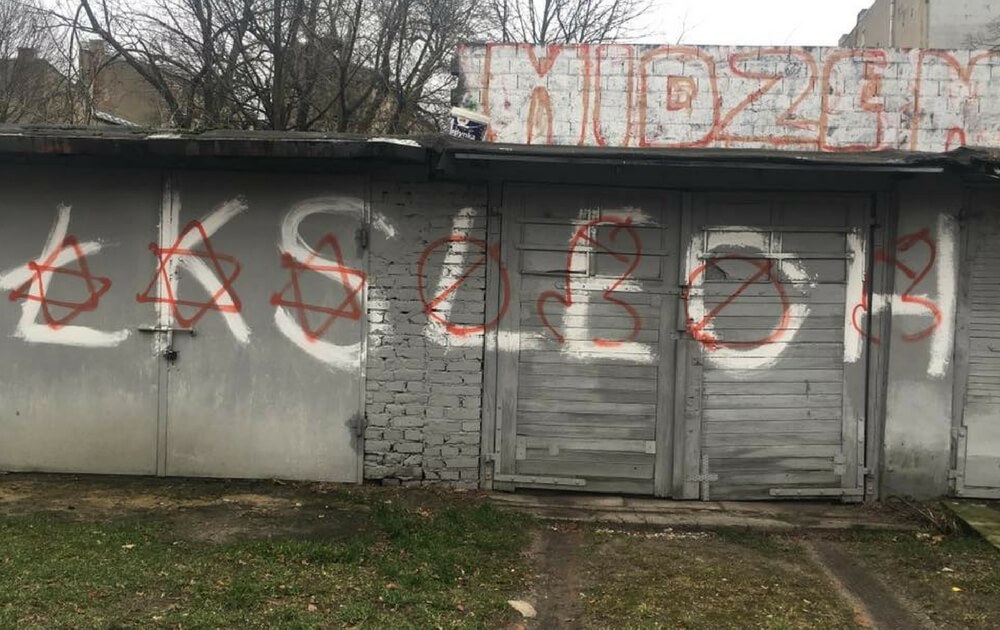 The trip was a chance for us to better understand the Holocaust — to try to understand something so incomprehensible. It turned out to be a glimpse of what Jews suffered on a daily basis.

Such a difficult yet revealing experience conjured a variety of emotional reactions from the group. For many, it was a way to connect with relatives lost to the Holocaust. For others, it taught them that anti-Semitism can even be found in a country that bore the brunt of Nazism. It was, at least for me, the first time I ever felt nervous and frightened to be Jewish. For most of the attendees, the trip gave them a stronger, more meaningful connection to Judaism.

“When I visited Israel before, I felt connected to Judaism as a religion. But in Poland, I really felt the connection to my heritage, said Sam Barak, a Mechanical Engineering Ph.D. student at the University of Central Florida. “All four of my grandparents are from this Poland/Belarus area. I could picture my ancestors living on the same ground I walked not even 100 years ago. I could feel what it must have been like for my extended family walking at the same train tracks at Birkenau.”

“The trip was as expected, sad and depressing, but the group we traveled with really supported each other. Dov, an Auschwitz survivor who had joined us on this trip, had the largest smile of them all. Just living and loving life made us all happy,” Barak said.

“Even with the Nazis trying to erase the Jewish race, we survived,” he added.

Another student said the trip stirred up pride in both herself and her history.

“As someone who travels a lot, this is the first time I have ever really felt a purpose in my journey. I have never been more proud of who I am and where I come from,” Rachel Kessler, a student at Santa Monica College, said.

Twenty feet from the electric wire fences of Majdanek is a housing development. From a window in the gas chamber, you can see Christmas advertisements in the distance. A statue from the Third Reich looms over the death camp, and a mausoleum called the “Mountain of Ashes” overlooks the city that lies down the hill. You can sense the horror, the shock, and the misery and walk in your ancestor’s footsteps, at least for a second.

A previous version of this article appeared on The Daily Caller News Foundation website.

Gabrielle Okun
Real Stories. Real People.
You Can Read All the 'Twitter Files' Right Here
Muslim Came to US Hoping to Convert Americans to Islam, Now He Teaches Others About Jesus
'WJ Live': Ron DeSantis' Clever Solution to Halt Kids' Drag Shows
Transcript: Fox Anchor Who Left Over Liberalism Gets Blunt About Why She's Running for AZ Gov
Video: Biden Calls Another Lid, But This Time He's Staying Hidden Until the Final Debate
See more...
Advertisement

Legend Behind 'Remember the Titans' and Other Movies Has Died

"I think it takes a black man to write about black men,” Gregory Allen Howard said in a newspaper interview in 2009.
By The Associated Press  January 28, 2023

Actor Neal McDonough, who stars in the new film "Left Behind: Rise of the Antichrist," has relied on his Christian faith to guide his career.
By Randy DeSoto  January 28, 2023
Next