Iran has a history of supporting Sanders, a socialist independent who caucuses with Democrats in Congress. Iranian state media promoted Sanders while demonizing Trump and eventual Democratic nominee Hillary Clinton during the 2016 presidential campaign. 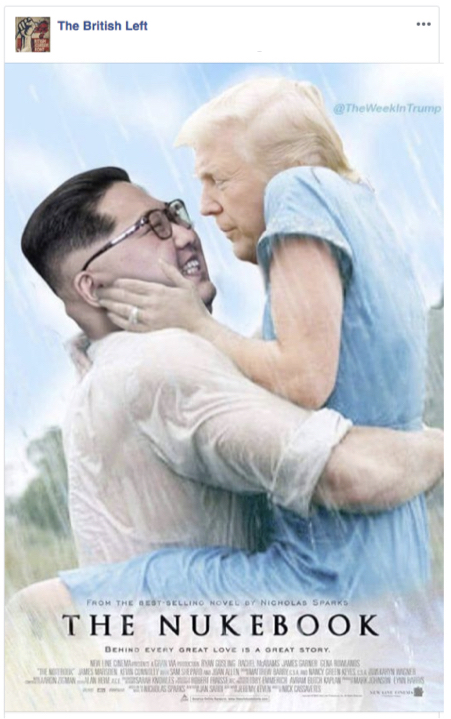 (An example of Iranian anti-Trump propaganda provided by Facebook.)

“Working with our industry peers today, we have suspended 284 accounts from Twitter for engaging in coordinated manipulation,” Twitter said in a statement Tuesday evening. “Based on our existing analysis, it appears many of these accounts originated from Iran.”

“Broadly speaking, the intent behind this activity appears to be to promote Iranian political interests, including anti-Saudi, anti-Israeli, and pro-Palestinian themes, as well as to promote support for specific U.S. policies favorable to Iran, such as the U.S.-Iran nuclear deal (JCPOA),” FireEye concluded in its initial analysis published Tuesday evening.

“In the context of the U.S.-focused activity, this also includes significant anti-Trump messaging and the alignment of social media personas with an American liberal identity,” FireEye noted. “However, it is important to note that the activity does not appear to have been specifically designed to influence the 2018 U.S. midterm elections, as it extends well beyond U.S. audiences and U.S. politics.”

The Daily Caller News Foundation previously uncovered Iranian nationals masquerading as Americans online in order to demonize Indian immigrants as part of a propaganda campaign meant to influence federal legislation. That campaign appears to have been separate from the one uncovered by FireEye’s investigation.

Facebook also removed some Russian-linked accounts that were operating separately from the broad Iranian campaign, the company said.

“The activity we have uncovered highlights that multiple actors continue to engage in and experiment with online, social media-driven influence operations as a means of shaping political discourse. These operations extend well beyond those conducted by Russia, which has often been the focus of research into information operations over recent years,” FireEye stated in its conclusion.

“Our investigation also illustrates how the threat posed by such influence operations continues to evolve, and how similar influence tactics can be deployed irrespective of the particular political or ideological goals being pursued.”