I’ve come to the conclusion mask hysteria can be hazardous to your health.

This isn’t to get into the thorny issue of the efficacy of the masks in preventing COVID-19. Rather, it’s to note that we’ve gotten to an ugly point where people’s reactions to masks can pose a legitimate danger.

In Maplewood, Minnesota, for instance, 64-year-old Michael Florhaug allegedly wanted to ensure the patrons at his local LA Fitness were wearing their masks inside the establishment, according to KSTP-TV. This is usually the role of the gym itself, but Florhaug apparently felt it wasn’t doing a good enough job of it.

However, since Florhaug didn’t necessarily have the authority to, say, throw anyone out of the place, he decided he needed a bit of backup. Nine millimeters of it, to be precise.

KSTP-TV reported that Florhaug was arrested in the St. Paul suburb and charged with second-degree assault after he went to the gym on New Year’s Eve to see if members were wearing masks and then allegedly pointed a 9mm SIG Sauer at the manager.

He couldn’t have just stayed at home and watched Anderson Cooper and Andy Cohen get drunk on CNN, I guess.

According to KSTP, a criminal complaint alleges that Florhaug arrived at the gym at about 5:30 p.m. to see if those working out were complying with a state mandate to wear masks while exercising. Florhaug isn’t even a member of the gym, according to the report cited by the station, but again, this doesn’t sound like the kind of guy who was going to stay at home and watch the ball drop.

Florhaug first spoke to a front-desk employee in a manner described as (now here’s a shocker) “aggressive and angry” about members not wearing their masks, KSTP reported. Then a manager spoke to him and said that the staff at the gym couldn’t be omnipresent and suggested Florhaug pay for an employee who could act as a mask monitor.

This isn’t the kind of guy who takes sarcasm well, one gathers, because he yelled at the manager and called him “dumb,” KSTP reported. Even though the manager said he couldn’t enter the gym, Florhaug said he was going to go around and “take pictures of people,” telling authorities he wanted to get LA Fitness in trouble. The gym doesn’t allow photography of individuals without their consent — not that Florhaug should have been inside anyway, given he wasn’t a member and had specifically been told not to enter, but there’s another issue for you.

As Florhaug tried to enter, the manager threw his hands up to stop him, KSTP reported. That’s when Florhaug pulled out his friend from SIG Sauer — and he didn’t just “flash” it, but “completely removed it from his pocket and point[ed] it” at the manager, according to one witness.

The manager then tackled and disarmed him, according to the report, fearing (not unreasonably) that he would shoot gym members without masks.

Florhaug denied that report once law enforcement got hold of him, said that he only “flashed a gun” and claimed the manager was “aggressive and in his face.” If he gave the authorities a reason for why he was in a gym where he wasn’t a member while carrying a SIG Sauer and looking to “take pictures of people,” it remained sadly unrevealed by KTSP.

Florhaug has an active permit to carry a weapon, although one imagines there’s a pretty strong chance that changes in the near future.

Related:
Biden to Demand All Federal Employees Get COVID Vaccine, Has an Ugly Surprise for Those Who Refuse

Whatever happened at the LA Fitness in Maplewood, Minnesota, it’s more evidence that mask fixation is profoundly unhealthy.

After his sister purportedly contracted COVID “because of antimaskers,” Eichenwald wrote in a Twitter post that he wanted to beat someone against masks to death (although not really, he made sure everyone knew) and that “‘Christians’ who preen about God saving you from COVID so you dont need masks” are “what Jesus condemns.”

WARNING: Some of the following tweets contain vulgar language that some viewers will find offensive.

Democrats like @KurtEichenwald have lost their minds and would throw you into camps without thinking twice about it. Remember that. There is no unity to be had with lunatics like him. pic.twitter.com/b8cxnK6u8T

..no, I’m not planning to kill anyone. Just, as the misery descends on our family again, it is hard not to contemplate violence against those who don’t care if they kill. 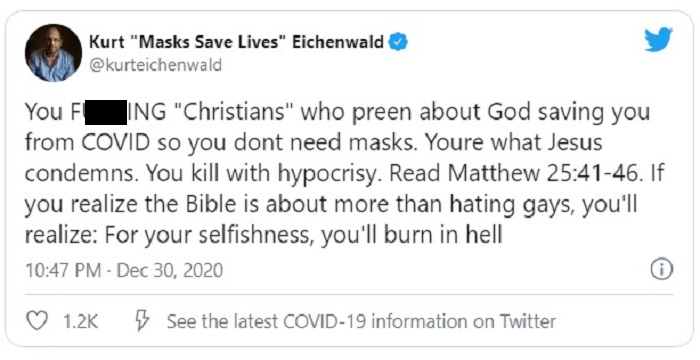 Eichenwald, to be fair, was never on the surest mental footing before the COVID-19 crisis, but it’s both fascinating and disturbing to see how thoroughly the pandemic has unmoored him.

A Baltimore cop is accused of assaulting someone who wasn’t wearing a mask correctly. A woman in Arizona had to be tasered after she allegedly assaulted her children, who had COVID-19, after they reportedly refused to wear masks in the house.

And of course, there are those who have unhealthy reactions to being told to wear a mask, too. In fact, typing in “unhinged mask rant” on the social media platform of your choice will yield more than enough results to keep you entertained or frightened, depending on your take on this all.

As Cliff Maloney, president of the libertarian group Young Americans for Liberty, pointed out in a Facebook post, this is yet another sign “mask hysteria has officially hit dangerous levels.”

When busybodies are going to gyms they don’t belong to in order to take pictures of those not wearing masks and then allegedly pulling out a gun when they’re not allowed to enter, we have to agree.

GOP Congressman Sets His Sights on Biden Family, Introduces Bill to Make Them Tell the Truth

The focus of tax policy should not be the futile effort to create a more equitable society, but rather to create more opportunity to grow.
Randy DeSoto July 28, 2021

It's not your imagination when you go to the store or stop at the gas pump: Prices really are going up. Big time.
Mike Landry July 28, 2021

Dad Severely Burned and Temporarily Blind After Saving 18-Month-Old Twins from House Fire: 'I Had to Get My Babies Out'

AOC implied when speaking with CNN in a leaked and unaired interview that white men might have come to the Capitol to 'rape' her.
Kipp Jones July 28, 2021