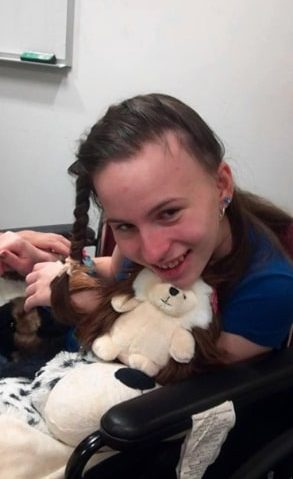 The photo above is of Justina Pelletier and chances are you remember her, even if not by name. When Justina’s parents brought her to the bluest state in the union to get medical treatment, instead she got kidnapped by Boston Children’s Hospital and the Commonwealth of Massachusetts.

They took Justina off her medications and locked her in a psych ward. She languished in agony for over a year as her parents struggled to assert their rights against the state’s Democratic establishment. Justina has never walked since.

What happened to Justina and her family in Massachusetts should scare everyone in America — and if Texas ever turns blue then it’ll all go wrong there too.

Shockingly, the Commonwealth family court even put Justina’s parents under a gag order, forbidding them from speaking out. However, thankfully Justina’s story had already gone viral and the Pelletiers continued telling the truth about what was happening.

Trending:
Marine Imprisoned in Russia Reveals How He Feels About Biden Freeing Brittney Griner but Not Him

From Fox to Daily Kos, ABC News to The Daily Mail, Breitbart, TheBlaze, The New American, Red State, WND, Slate, and numerous others, the Kafka-esque story of Justina’s heartbreaking and nearly fatal odyssey through a liberal nanny-state gauntlet was ubiquitous.

Then, the day when Justina finally went home — when she could finally speak for herself following 16 months of brutal torture — she gave this Edward-R.-Murrow-award-winning interview detailing her suffering at the hands of the healthcare system which brought you Obamacare:

My name is Marty Gottesfeld and I fought Harvard in a liberal nanny-state against all odds to save Justina’s life. That incredible story has been told by Michelle Malkin, Rolling Stone, The Daily Wire, The Huffington Post, The New American, Red State, RT, The Daily Mail, WND, The Daily Caller, and now right here at The Western Journal.

I’m called a “political prisoner of the Massachusetts Democratic establishment” and I’m writing to you from behind Obama’s bars to endorse Ted Cruz for Senate.

Justina and I bear witness to the true costs of total Democratic control. She is still crippled and still suffers from PTSD while I’ve spent the last 32 months in prison for daring to resist the liberal establishment in my state to save her life. Our two Democratic senators did nothing for Justina and they’ve done nothing for me.

I also know that Texas has an outstanding health care system — at least for now. I hope you’ll keep it that way and help repeal Obamacare before it’s too late by sending Ted Cruz — a true patriot who also fights the existential battle for free speech online — back to Washington with a mandate to stop what happened to Justina and I from ever happening again anywhere in America — especially in the Lone Star State.

The midterms are Tuesday, Nov. 6. That’s less than 3 weeks from today. And key House and Senate seats are up for election in Texas and elsewhere. So, don’t listen to the polls. Show up and vote, no matter what. I wish I could join you.

And remember, if Texas ever turns blue, it will all go wrong there too.

Martin Gottesfeld is a human rights activist facing up to 25 years under the CFAA for helping save Justina Pelletier.

Martin Gottesfeld
The Western Journal publishes select Op-Eds submitted by our readers. If you would like to submit an Op-Ed, fill out a submission form here: https://www.westernjournal.com/writeforus/.
To Solve the Opioid Crisis, Get Tough on the Border and with Foreign Adversaries
It's Official - the Democrats Are the Party of Open Borders
Epoch Times: Our Response to NBC News' Inappropriate Questions
Insurance Companies Impede Health Care Reforms
Kelli Ward: Trump's Victories Are Stacking Up in Arizona
See more...
Advertisement

Greta Thunberg's time in the spotlight may be coming to an abrupt halt. Climate activists appear to have anointed a new star.
By Bryan Chai  December 8, 2022
Next