For a woman who built a career on beauty, the ugliness is striking.

In the parts of the world where she’s famous, Chrissy Teigen is considered a supermodel, part of the elite class of perfect faces and alluring bodies who’ve graced the covers of high-fashion publications or flaunted their assets for men’s magazines like Sports Illustrated’s swimsuit issue.

But she’s also known — along with her husband, the overrated singer John Legend — for being an outspoken liberal ferociously opposed, like most of the Beautiful People, to President Donald Trump and the revolution he brought to American politics.

On Twitter Tuesday, while sane people were preoccupied with the Chinese coronavirus that’s changing the face of the United States on an almost hourly basis, Teigen decided to bring that opposition to bear on first lady Melania Trump, with a string of profanity-laced tweets that insulted Melania’s intelligence as a “wifebot” while calling the president himself a “loser wimp.”

Fortunately, the first lady has plenty of fans who were willing to fight back on her behalf.

It wasn’t clear exactly what sparked the vicious Twitter rant, but she might have just caught up to Melania Trump’s post from March 7, where the first lady urged her critics to turn their energies toward something “good and productive in their own communities.”

To Teigen’s type, apparently, a sensible plea like that is an invitation for yet more coarseness and sheer malice — proving that all the money and fame in the world won’t buy even the most beautiful woman one ounce of class. 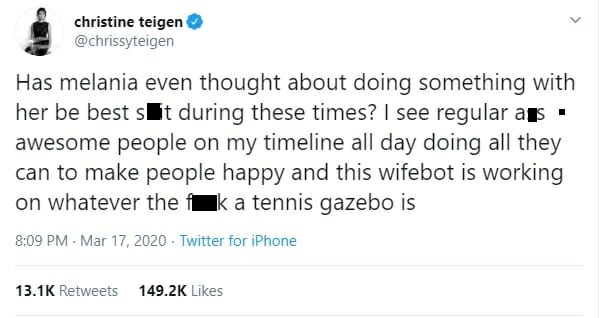 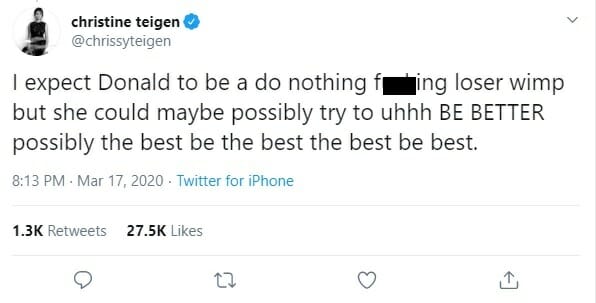 Seriously? This is a woman who, at age 34, is best known for appearing half-naked on slick pages of various magazines. (Four years in a row in Sports Illustrated!)

And she’s up on a high horse attacking a modeling veteran who has spent her White House years at least trying to use the influence of her current position to help young people deal with emotional problems, bullying and thoughts of suicide with her “Be Best” initiative?

Of course, Teigen’s rant drew plenty of liberal supporters – even in the #MeToo world, the left loves nothing more than to publicly assault a woman on the right.

But that wasn’t all it drew.

In the face of media and celebrity-world criticism that borders on the insane, Melania has developed a large base of fans who see a woman who’s much more than the still-stellar beauty that won her success in the modeling world.

And, as Teigen found out, those fans don’t like seeing the first lady attacked.

In this time of crisis THIS is what you’re worried about??!!! Maybe jealous that @FLOTUS has more class in her pinky finger than you could ever hope to have. pic.twitter.com/AHkwzNWf7g

Hey Chrissy! What do you do to make “life better” for your community besides naked selfies? Reality is: she’s much more beautiful than you by far.

You are acting like a Self-Centered Spoiled Brat….Calm yourself down. #MeleniaTrump is a Steller Example for Girls and Women everywhere. #PresidentTrump @RealDonaldTrump is one of the most effective Presidents in History. Up there with Abraham Lincoln and Ronald Reagan. Rtwt

But this one summed it up best — at least in spirit.

You are the epitome of hatred.
I am so happy I don’t live with the anger and evil you have in your soul.😔

“You are the epitome of hatred,” one user wrote addressing Teigen. “I’m glad I don’t have to live with the anger and evil you have in your soul.”

But what that last tweet does express is happiness at not having to live with the kind of ugliness Teigen’s tweets undoubtedly show. And that’s something every mentally balanced, emotionally adjusted person should relate to.

Even in the best of times, living in the miserable stew of resentment and rage that liberals have expressed since Donald Trump’s upset win in 2016 has to be trying on the soul.

Living with that in a time of stress like the one the United States population is dealing with now — thanks to the Chinese communist government – must be soul-destroying.

And when it comes out in the utterly vicious form on display in Teigen’s tweets, it’s as ugly as sin.