A study by the Anti-Defamation League showed that the number of murders by extremists dropped significantly under President Donald Trump compared to the last two years Barack Obama was in office.

However, the 50 deaths in 2018 did mark the fourth-deadliest year on record for domestic extremist-related killings since 1970.

Two major incidents in 2018 were the Parkland, Florida, high school shooting in February, resulting in the deaths of 17 students and teachers, and the Pittsburgh synagogue shooting in October, which left 11 dead.

The synagogue gunman had a history of expressing anti-Semitic views.

The then-19-year-old Parkland shooter reportedly had significant emotional problems and, while a high school student, had been recommended for involuntary institutionalization.

The ADL study considered the shooting linked to extremism because the gunman was “sympathetic to white supremacist ideology.”

According to CNN, his social media posts included slurs against blacks and Muslims, but he also communicated on multiple occasions his desire to kill people and be a “professional school shooter.” His victims were primarily white.

Am I reading this correctly, that right-wing extremist murders dropped sharply under Trump? Murder and Extremism in the United States in 2018 https://t.co/0oWGrMOlb2 via @ADL

The most deadly extremist incidents during Obama’s final two years in office included the 2015 Charleston church shooting, which resulted in the deaths of nine African Americans.

The gunman was a white supremacist.

That same year, Islamist extremists killed 14 in an attack in San Bernardino, California.

In 2016, a gunman inspired by the Islamic State group murdered 49 in the Pulse nightclub shooting in Orlando, Florida. 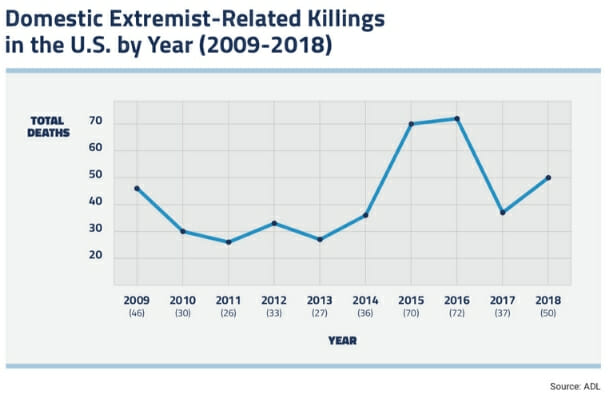 Trump received significant negative coverage in the media when asked following last week’s New Zealand mosque shooting, which left 50 dead, if he felt white nationalism is a rising threat around the world.

“I don’t really,” he answered. “I think it’s a small group of people that have very, very serious problems… It’s certainly a terrible thing.”

Reporter: Do you see white nationalism as a rising threat around the world?

President Trump: “I don’t really. I think it’s a small group of people that have very, very serious problems. I guess, if you look at what happened in New Zealand, perhaps that’s a case.” pic.twitter.com/Ae8xYLjQcZ

“The president is not a white supremacist,” Mulvaney answered. “I’m not sure how many times we have to say that.”

“The president is not a white supremacist. I’m not sure how many times we have to say that.” — @MickMulvaneyOMB@realdonaldtrump‘s Chief of Staff says Trump, in wake of NZ shooting, is trying to do everything to make it clear that “this has to stop.”.https://t.co/rpSDl6dKvx pic.twitter.com/PEihLF0wtC

“To simply ask the question every time something like this happens overseas or even domestically to say, ‘Oh goodness, it must somehow be the president’s fault,’ speaks to a politicization of everything that I think is undermining, sort of, the institutions that we have in the country today,” Mulvaney added.

“Let’s take what happened in New Zealand for what it is, a terrible, evil, tragic act, and figure out why those things are becoming more prevalent in the world. Is it Donald Trump? Absolutely not.”

The president tweeted on Monday, “The Fake News Media is working overtime to blame me for the horrible attack in New Zealand.”

The Fake News Media is working overtime to blame me for the horrible attack in New Zealand. They will have to work very hard to prove that one. So Ridiculous!

Trump continued, “They will have to work very hard to prove that one. So Ridiculous!”