Democratic Mayor Stokes Division, Says Fatal Truck Incident at Pride Parade Was 'Premeditated' Terrorist Attack... Turns Out It Was a Gay Guy Who Screwed Up

Do all black baseball legends look the same to House Speaker Nancy Pelosi?

On Thursday, Willie Mays turned 90. Mays, best known for his 1951-1972 years with the New York/San Francisco Giants, hit 660 home runs (still sixth all-time, according to ESPN), a defensive monster in the outfield (if you haven’t seen his over-the-shoulder catch during the 1954 World Series, you haven’t watched much baseball) and a civil rights leader.

He’s one of the last surviving men who integrated baseball in the late-1940s and early-1950s, as well as one of the last living Negro League stars — and, with all due respect to Jackie Robinson, he was likely the best in both categories.

There was plenty of love for Mays, particularly in San Francisco. On Friday, the Giants celebrated Mays’ life and career, giving him a “victory lap” around Oracle Park during a 5-4 home win against the San Diego Padres, according to ESPN. Recorded birthday wishes that played on the big screen included baseball stars like Barry Bonds and Derek Jeter; non-baseball talent, ranging from rapper Lil’ Wayne to hockey legend Wayne Gretzky, also wished him a happy 90th. #SayHey90, referencing Mays’ nickname (“The Say Hey Kid”) and his birthday, also trended on Twitter.

San Francisco’s most powerful politician, Democratic House Speaker Nancy Pelosi, fired off one of those tweets on Thursday.

Trending:
Pro-BLM Dem Senator's Hypocrisy Gets Exposed When He's Confronted About His Membership in All-White Club

A touching tribute featuring a picture of her. With Willie McCovey, another Giants legend who passed away in 2018.

Woof. (Deleted one on left is Willie McCovey.) pic.twitter.com/vLgWo7fhPn

According to the Daily Mail, the picture is from McCovey’s 2018 wedding; he died several months later.

While both are Hall of Famers and both have their numbers retired by the Giants, that tweet is a pretty big whiff. After a few minutes, according to data from ProPublica, it was deleted and replaced with an actual picture of Pelosi and Mays.

Now, the question shouldn’t be how much blame we ought to ascribe to Pelosi for tweeting out a picture of the wrong black Giants star.

A fair number of politicians don’t even read most of their tweets, much less write them. At the very least, that’s what Pelosi’s staff is saying happened here; the New York Post reported that “[h]er office fobbed the issue off to a staffer error.”

There’s undoubtedly some poor communications staffer still getting raked over the coals for this Thursday tweet as I write this on Sunday — and the next time Pelosi needs said comms staffer to work on a Sunday night, all she has to do is exclaim, in a shrill rasp, “Willie McCovey!” and he’ll be doubtlessly be looking up what places are still delivering on DoorDash at 10 p.m. on the Lord’s sabbath as he churns out late-night tweets for the House speaker.

So what, then, is the importance of this swing-and-miss? I direct your attention to this New York Times story last summer after the death of Democrat Rep. John Lewis: 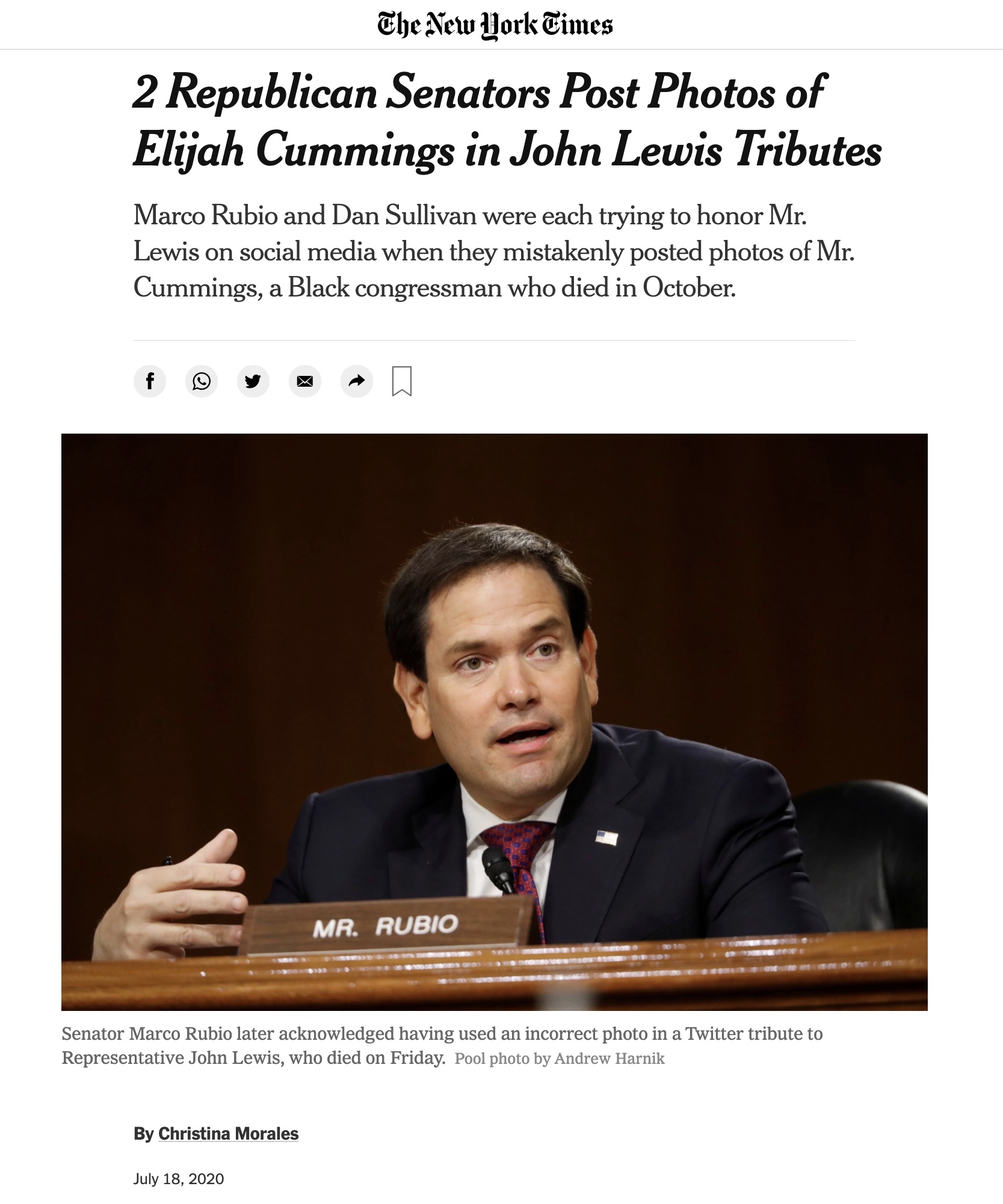 You can almost hear where the emphasis is supposed to go when you read the headline: “2 Republican Senators Post Photos of Elijah Cummings in JOHN [FREAKING] LEWIS Tributes.” You can almost fit the subtext in between the headline and the sub-headline, too: “Did we mention John Lewis was a black civil rights icon? Because, yeah, he was — and these are Republicans. Hint hint.”

Twitter went even further than subtext. Here’s one user saying Florida Sen. Marco Rubio and Alaska Sen. Dan Sullivan did it for a reason:

Here’s another telling them to resign:

Like thousands of Americans, Marco Rubio & Dan Sullivan took to social media on Sat. to mourn the death of Rep. John Lewis, a venerated figure of the civil rights movement. So they screw it up by posting pics of Elijah Cummings!? JUST LEAVE OFFICE IDIOTS!https://t.co/0l5s1ZamZ0

And here’s someone joking about Sen. Rubio being a racist who can’t tell black people apart as John Legend and the rapper Common perform at the Democratic National Convention last August:

“Which one of them is John Lewis?” – Marco Rubio to his staff #DemConvention pic.twitter.com/GcJjrDhals

Here’s Steve Schmidt of disgraced anti-Trump group the Lincoln Project, calling Rubio “[p]athetic … a coward and an enabler of the first order for America’s despicable and lawless President.”

That is Elijah Cummings. Pathetic. John Lewis was a courageous and fearless man. You are a coward and an enabler of the first order for America’s despicable and lawless President. John Lewis stared death in the face and didn’t flinch. You are terrified of Trumps mean tweets. https://t.co/YcF1fXwAJ0

There was enough invective that Cummings’ widow actually had to step in and say that “Rubio’s honest mistake was one that John and Elijah were completely used to forgiving since they were considered doppelgangers: biologically unrelated but, to the unpracticed eye, looking so much alike that they were often mistaken for the other,” according to CNN.

Mays’ birthday may not carry the same category as John Lewis’ death, but if there’s some whiff of racism lurking behind confusing one black man for another, it applies evenly.

There have been no stories on Pelosi’s gaffe by The New York Times thus far and the Twitter-shaming seems to mostly be conservatives laughing at the stupid mistake Pelosi’s staff made. There’s none of the blue-checkmarked hate, none of the accusations of racism — nothing like that.

It’s almost like it’s not really racism when a Democrat does it. Imagine that.

'I'm going to do my best and do my part to cultivate a culture that's accepting,' the former Penn State star said in his announcement.
Jack Davis June 22, 2021

'There's very little in terms of extreme weather that has changed over the last many decades,' a former Obama administration official said.
Samantha Chang June 22, 2021

Joe Biden's prized infrastructure bill has hit a roadblock that the president did not expect - Bernie Sanders.
Garion Frankel June 21, 2021

If there were thousands of envelopes that did not have signatures, that would be a 'huge failure' by Maricopa County, Ken Bennett said.
Randy DeSoto June 21, 2021

Tokyo Olympics Set to Have Fans with Extreme Limitations

Though foreigners were banned back in March, the Tokyo Olympics will still have strict rules for those fans allowed to attend.
Jack Davis June 21, 2021

A federal judge sided with Florida on Friday, approving the state's injunction against the CDC's order restricting the cruise industry.
Michael Austin June 21, 2021

The idea that paintings by a man who just recently became a serious artist would immediately be worth up to $500,000 seems questionable.
Grant Atkinson June 21, 2021

Young Not Stupid: My Grandfather's Legacy of Living the American Dream Deserves to Live On

He oversaw the rapid growth of Bellingham into the 21st Century by ensuring that the grass was cut, the snow was plowed, and so much more.
Cameron Arcand June 21, 2021

This isn’t the first time that Kamala Harris has been accused of stepping on black Americans to reach the next rung on the political ladder.
Kevin Catapano June 21, 2021