Christine Pelosi, daughter of House Speaker Nancy Pelosi, probably thought she was going to make friends and influence people with a Twitter post mocking the news that Kentucky Sen. Rand Paul tested positive for the coronavirus.

But judging by the storm of responses on Pelosi’s own account, she just stirred up a gale of criticism directed at her — and her powerful mother.

As Fox News reported, Paul’s announcement on Sunday that he’d contracted the virus led to other Republican lawmakers who had contact with him deciding to go into self-isolation.

One of them was Utah Sen. Mitt Romney, whose decision sparked a Twitter post from Washington Post reporter Paul Kane, who wrote that Romney was going to be separated from his wife to avoid possibly infecting her.

“He told us the other day his biggest concern was not getting this because his wife has MS,” Kane wrote. “Now he can’t see her for almost two weeks.”

A personal story like that could have touched heart of stone.

He told us the other day his biggest personal concern was not getting this because his wife has MS. Now he can’t see her for almost 2 weeks. https://t.co/4S2H8WoJ5F

But for Christine Pelosi, it was just a chance to respond with snarky praise for the man who attacked Paul in a neighborhood dispute in 2017 — an attack that has left Paul with serious complications that required surgery last year.

The post has apparently been deleted, but a screen shot is here: 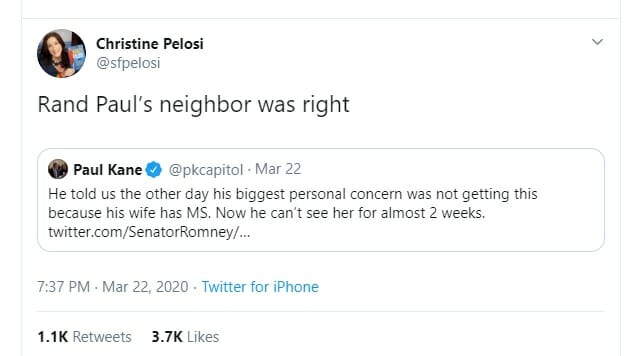 It got plenty of attention.

This is Nancy Pelosi’s daughter

Saying that Rand Paul’s neighbor (who beat Rand to the point of breaking 6 of his ribs) was right.

This is abhorrent behavior, but I guess the apple doesn’t fall far from the tree, does it @SpeakerPelosi? pic.twitter.com/GulAllH1yk

If she was expecting kudos from her liberal comrades, the blowback must have been stunning.

But for an American tired of the Pelosi brand of vicious politics — and the very real damage it’s doing to the United States — the responses were gratifying.

This is disgusting, even for you.

Whoah… this is kind of sickening

Some called out Pelosi for sanctioning violence against elected members of Congress (like, say, her mother).

@TwitterSupport is encouraging violence against an already attacked member of Congress acceptable? @SpeakerPelosi

Others mocked Nancy Pelosi’s often-repeated — and rarely believed — invocations of her applying her own Catholic faith to her political life.

Very prayerful and somber. Just like your mother wanted.

At least one even came from a self-described opponent of Paul, but one who could see that Christine Pelosi had crossed a line.

Hate his politics but he has a family, colleagues (liberal ones), etc. and he does good things. This is beyond hateful. https://t.co/M64EkIIAoK

“This is beyond hateful,” that user wrote.

The description was apt, but as other commenters noted, it wasn’t exactly surprising coming from the Pelosi line.

Christine Pelosi, evil must run in your family.

But this one was the bluntest.

To see a daughter of the hyper-political, power-hungry House speaker debase herself by insulting a senator who’s already dealing with a potentially fatal ailment should be surprising.

But at a time when that same House speaker has already debased herself and her country by waging a disgraceful war of #Resistance — including a ludicrous impeachment attempt that seems only more absurd now, viewed through the lens of a genuine national crisis — it’s almost to be expected.

Christine Pelosi obviously believes that politics is no game of bean bag — a lesson she learned at her mother’s side, if not on her knee.

Remember, this is a woman who watched with the rest of the country as her mother ripped up President Donald Trump’s State of the Union address on national television and got resounding applause from Democrats in Congress.

Where she went wrong, though, was apparently thinking this tweet attacking Paul was going to win her plaudits from her political allies.

What she got instead was payback that was savage — and richly deserved.