Right about now, Vice President-elect Kamala Harris probably wants a bit of fweedom from a resurfaced Elle magazine profile from October that hit the fan this week.

To a certain extent, she’s gotten some, albeit in the worst way. Thanks to the mob violence at the U.S. Capitol on Wednesday, it was erased from the news.

However, it’s not going to fade from sight. After all, the certification of the Electoral College vote early Thursday morning — preceded by the riot that reportedly left four dead — means Kamala Harris not only becomes the vice president-elect but, thanks to Joe Biden’s advanced age, moves into a unique place in history as the first veep who’s basically in the presidential green room, waiting to go on.

Hilarious, then, that it turns out she’s inherited Biden’s penchant for lifting anecdotes from other people, including the apparent plagiarism of a story from the Rev. Martin Luther King Jr. as part of her backstory. As sources of plagiarism go, it beats the heck out of Neil Kinnock.

At least as far as stealing King’s story goes — and a few other things — however, the late civil rights leader’s niece isn’t impressed.

On an appearance on Lou Dobbs’ Fox Business show, Alveda King said that it was a “big stretch” to compare Harris’ legacy with that of her uncle.

“Kamala knows that her world view is totally different than the world view of Martin Luther King Jr., so it’s a big stretch for her to compare herself or to sound like him or to use some of his some analogies,” King said.

“For instance, Kamala believes that it’s OK to abort babies up to nine months. And if you meant to abort the baby and the baby lives, then let the baby die. Martin Luther King Jr. served the public. He did not kill the public, and that would include babies in the womb.

“He said, ‘Injustice anywhere is a threat to justice everywhere.’ So she’s nothing like Martin Luther King Jr. but she still — there she is, playing on those emotions again.”

It wasn’t really these issues that drew people’s attention to a slavish, obeisant Harris interview in Elle.

Rather, it was the anecdote she told at the beginning of the story.

“Senator Kamala Harris started her life’s work young. She laughs from her gut, the way you would with family, as she remembers being wheeled through an Oakland, California, civil rights march in a stroller with no straps with her parents and her uncle,” writer Ashley C. Ford’s profile began.

“At some point, she fell from the stroller (few safety regulations existed for children’s equipment back then), and the adults, caught up in the rapture of protest, just kept on marching. By the time they noticed little Kamala was gone and doubled back, she was understandably upset. ‘My mother tells the story about how I’m fussing,’ Harris says, ‘and she’s like, “Baby, what do you want? What do you need?” And I just looked at her and I said, ‘Fweedom.'”

Aww. Adorable and prescient, at that age!

“This past August, that same precocious child, now a member of the U.S. Senate, stood on a stage in a nearly empty auditorium flanked by American flags and accepted the Democratic nomination for vice president, making history as the first Black and Indian American woman to do so,” Ford continued.

The Elle writer was so heartened by Harris’ decision to laugh heartily from her gut, making Ford feel like family, that she forgot to even question the too-perfectness of this too-perfect, self-serving yarn. Neither did fact-checkers.

That’s problematic, since the story sounded oddly similar to one told by MLK Jr. during an interview with Alex Haley for Playboy magazine in 1965.

“I never will forget a moment in Birmingham when a white policeman accosted a little Negro girl, seven or eight years old, who was walking in a demonstration with her mother,” King told Haley.

“’What do you want?’ the policeman asked her gruffly, and the little girl looked him straight in the eye and answered, ‘Fee-dom.’ She couldn’t even pronounce it, but she knew. It was beautiful! Many times when I have been in sorely trying situations, the memory of that little one has come into my mind, and has buoyed me.”

So it turns out Kamala Harris lifted her “Fweedom” story from a 1965 Playboy interview with Martin Luther King, by Alex Haley. Much thanks to @EngelsFreddie for spotting the similarityhttps://t.co/zDONW4Ueqs pic.twitter.com/yQuWZHYEMz

The stories, while not exactly the same, are pretty close — and it represents a problem for Harris, who has issues with pandering to the black community already.

Does it besmirch the legacy of Martin Luther King Jr.? Well, this is more plagiarism — something that King himself was also accused of, to be fair, although certainly not on the scale of Joe Biden — but she is “nothing like him.” 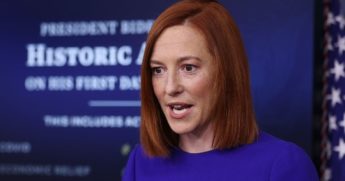