For the past three and a half years, I, along with millions of other Americans, have watched the mainstream news media essentially self-destruct in their obsession to remove Donald Trump from the White House.

I saw glimmers of this kind of mania when George W. Bush was president from 2000 to 2008. But the rabid fixation was nowhere near the level it has been since 2016 when Donald Trump flummoxed the know-it-all eggheads who pass for pundits on television and cable networks — not to mention at once-esteemed newspapers such as The New York Times, The Washington Post, the Chicago Tribune and the Los Angeles Times.

According to recent polling, only 29 percent of the public trust the news media today, contrasted to the 76 percent who trusted the media in 1970 when I joined the Chicago Tribune. As a result, establishment pundits and reporters have lost most of the moral authority and journalistic credibility they once had.

For two years as the Mueller investigation of collusion and obstruction of justice by the Trump campaign snaked its way into the collective national consciousness, I witnessed purportedly “objective” reporters blather on about Trump’s alleged guilt without displaying a single shred of evidence to back up those claims.

I have seen congressmen like Adam Schiff and Eric Swalwell “guarantee” that Trump not only colluded with the Russians, he was actually working for them and was guilty of treason.

Others, such as former CIA Director John Brennan and former Director of National Intelligence James Clapper, echoed those charges as paid political contributors to CNN.

Where was the evidence? There wasn’t any, as the Mueller probe proved.

Meanwhile, reporters and pundits behaved like brainless bobbleheads, agreeing with every negative statement made about President Trump without doing the most fundamental reporting.

Sadly, none of these things were anywhere to be found.

Why? Because the media, unlike they were when I became a reporter in the early 1970s, have fallen victim to groupthink. The result is a compliant media in which zombie-like reporters adhere to the approved paradigm. Those who don’t are, through dint of social and administrative forces, barred or banished.

The result of this media groupthink is reporting that continually commits bias of omission — that is, facts or information that may conflict or disprove an approved orthodoxy are conveniently omitted from stories.

This is selective reporting. It taints how events and stories are reported and presented.

It also engenders inaccurate and false reporting — or as Donald Trump calls it, “fake news.”

Related:
Erick Erickson: Think Progressives Are Winning? The Brits Might Actually Have Some Hope for Us

Think about Nicholas Sandmann, the Covington Catholic High School teenager wearing a red MAGA cap who was pilloried by the news media for his interaction with Native American activist Nathan Phillips at the National Mall in Washington, D.C., in January 2019. Just about every news outlet in the country fiercely condemned the 16-year-old for “attacking” Phillips and uttering “racist” and “offensive” statements.

In fact, Sandmann did none of those things. He simply stood his ground and tried to diffuse the situation. Subsequently CNN and The Washington Post were hit with $275 million and $250 million libel suits. CNN settled with Sandmann in January and The Post settled with him in July. The details of the settlements were not disclosed.

The Sandmann incident demonstrates that rather than attempting to report the news without prejudice, the media seem to regard themselves as agents of positive change within the culture, direct from their groupthink perspective. Therefore, any lie, no matter how big or small, is OK if it will denigrate Trump supporters and bring Democrats back to power.

Have you ever wondered why liberals and Democrats can run afoul of decency and the law with impunity, while the media demand that Republicans and conservatives respond to perceived misconduct and transgression by resigning, apologizing and, if the media hit the jackpot, testifying to a special counsel and then going to jail?

I have. All the time. And it makes me sick to see the news media refusing to perform its “watchdog” role evenhandedly.

Not only does it make me sick, but it also makes me ashamed — ashamed to tell anybody I meet that I am a former journalist for fear they will give me that piteous and doleful look as if to say: “Uh huh — one of those!”

Yes, I am “one of those.” But I can still look back on my body of work with pride and without shame. During my 27-year career, I worked assiduously to keep my personal opinions, my biases and my predispositions out of my stories.

I wonder how many reporters today will be able to do the same when they finally hang up their reporters’ notebooks and tape recorders? Not many, I wager.

Whatever happened to such bedrock democratic principles as equal protection under the law, the First Amendment and innocent until proven guilty? At this point, these underlying constitutional tenets seem like little more than quaint bygone concepts as far as our media are concerned.

As a result, our national culture, not to mention our national discourse and our media, are aligned with liberals, socialists and Democrats who loathe Republicans and conservatives.

When was the last time you watched or listened to a composed, reasoned and articulate debate about an issue without one side fulminating, talking over or shouting at the other? Can you recall such an occasion in the last four years?

Our public discourse has devolved into the verbal equivalent of a UFC mixed martial arts competition with social media and mainstream news organizations acting as corrupt referees who are making sure the guy in the left corner always wins.

That means you can forget about enjoying a settled, unruffled culture until Democrats, liberals and foolish socialists regain total control of the government.

When he was 81 years old, Founding Father Benjamin Franklin once told a woman that the United States was “a republic, if you can keep it.”

“If you can keep it,” are the operative words. The fact is, we may already have damaged our republic beyond repair by the silencing of dissent through despotic control of information and the instantaneous social thrashing of the non-compliant.

I worry that by embracing groupthink and discouraging independent thought on college campuses, by fostering a news media that deceives its citizens and by electing dumb people to Congress who are ignorant of our history and our political systems, we are dooming the republic that Ben Franklin helped create.

So I find myself asking the question again: Can America’s news media be salvaged?

I’m not holding my breath. 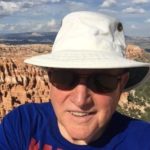 Ronald Yates
Ronald Yates is an award-winning former foreign correspondent for the Chicago Tribune and professor emeritus of journalism at the University of Illinois, where he was also the dean of the College of Media.
Op-Ed: 4 Disturbingly False Things That American Voters Believe
Op-Ed: Since I Became a Journalist in 1970, Reporters Have Abandoned the American People
Op-Ed: 2020 Is Looking Like 1876, When Members of the House, Senate & SCOTUS Picked the President
See more...
Advertisement