Related:
Op-Ed: Americans Are Rejecting Woke Hollywood - We Must Provide a Better Alternative 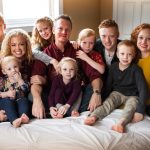 J.P. Johnston
Dr. J. P. Johnston is a family practice physician in the Charlotte, North Carolina area. He has 10 home-educated children and is married to Elizabeth aka “The Activist Mommy," whose video blogs have been viewed by over 70 million. Dr. Johnston just released his ninth novel, "Body By Blood," a medical thriller. He is presently writing his first World War II biography. He recently wrote and produced his first movie, "The Reliant," starring Kevin Sorbo, Eric Roberts, Brian Bosworth, Mollee Gray, and the Benham Brothers, which should come to theaters soon. He directs the Association of Pro-Life Physicians.
Producer: My Christian Film Got Rated 'R.' It Has No Nudity, Sex, Bad Language, Gore, Drugs.
See more...
Advertisement