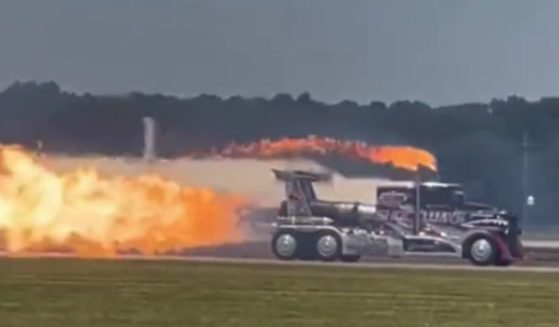 The 18-year-old gunman behind the Tuesday shooting at a Texas elementary school sent disturbing messages to a female stranger before carrying out the massacre.

“I’m about to,” Salvador Ramos messaged the user behind the Instagram handle @epnupues before heading to Robb Elementary School in Uvalde, Texas, where he would kill at least 19 children and two adults and wound several others, the New York Post reported.

Instagram took down what is believed to be Ramos’ handle @sal8dor_ after Republican Texas Gov. Greg Abbott identified him as the gunman behind the shooting.

Ramos used firearms he bought in May after turning 18 to carry out the school shooting. Before heading to the school, he had “shot and critically wounded” his grandmother, according to the Washington Post.

Before Instagram took down his Instagram account, Ramos’ handle @sal8dor_ featured a single grid post consisting of three images: a mirror selfie of Ramos wearing a sweatshirt, a close-up of his face and a picture of someone with a gun magazine on their lap, the New York Post reported.

Ramos had also published a picture of two rifles lying side by side on his Instagram Stories, tagging a user named @epnupues and messaging her, “got a lil secret.”

The message’s recipient @epnupues told the New York Post that Ramos was a stranger to her when he sent her the message and that she did not even live in Texas.

When @epnupues asked Ramos why he had sent her the picture of the rifles, Ramos replied on May 12, “You gonna repost my gun pics.”

“what your guns gotta do with me,” the girl asked Friday.

“Just wanted to tag you,” he answered.

“I got a lil secret I wanna tell u,” he wrote to her, not telling her what the secret was. “Ima air out,” was Ramos’ last message to @epnupues at around 9:16 a.m.

Ramos’ friends and relatives described him as a lonely 18-year-old with a troubled home life who suffered from bullying over a speech impediment he had during his childhood, the Washington Post reported.

Ramos’ childhood friend Santos Valdez Jr, who knew him from elementary school and was friends with him until Ramos’ behavior took a turn for the worse, told the Washington Post that one time, Ramos came to a park where they used to play basketball with cuts all over his face.

When questioned, Ramos said a cat scratched his face.

“Then he told me the truth, that he’d cut up his face with knives over and over and over,” Valdez told the Washington Post. “I was like, ‘You’re crazy, bro, why would you do that?’”

“He would be very rude towards the girls sometimes and one of the cooks, threatening them by asking, ‘Do you know who I am?’ And he would also send inappropriate texts to the ladies,” a former co-worker told The Daily Beast.

“At the park, there’d be videos of him trying to fight people with boxing gloves. He’d take them around with him,” the co-worker said.

For Ramos home was no sanctuary. Neighbors told the Washington Post that Ramos’ mother used drugs and she and he would have fights with each other often. Eventually, Ramos moved to his grandmother’s house.

Tragedy struck on Saturday during the Battle Creek Field of Flight Air Show and Balloon Festival in Michigan.
By Jack Davis  July 3, 2022

Biden Got Poor Families Addicted to Free Lunches, Now They Can't Feed Themselves

Biden's free school lunch program got many families addicted. Now that its ending, they have few places to turn to.
By Michael Austin  July 3, 2022

At least one correction had to be issued after media outlets mis-stated the writings of Justice Clarence Thomas.
By Jack Davis  July 3, 2022

The Supreme Court is asking the governors of Maryland and Virginia to end the regular protests occurring outside of the Justices' homes.
By Richard Moorhead  July 3, 2022

'The mayor, the city council, and the city staff must continue to move forward without distractions,' Arredondo said.
By Richard Moorhead  July 2, 2022
Next