Prominent anti-Trump celebrity Chrissy Teigen engaged in a bit of virtue-signaling last month by promising to boycott Goya Foods after its CEO appeared at the White House and spoke favorably about President Donald Trump. However, a month later, she accidentally exposed herself as all talk and no action.

Tiegen opened her Twitter Post with an elongated spelling of an obscenity, then vowed she was done with Goya.

“A shame. Don’t care how good the beans taste though. Bye bye,” she wrote.

Last week, however, Teigen posted a video of herself making oxtail stew to her Instagram page. What Teigen might not have realized is that Goya peas were one of the ingredients she used. Fortunately, a Twitter user with the handle @TiffyLongLegs noticed and took a screenshot. 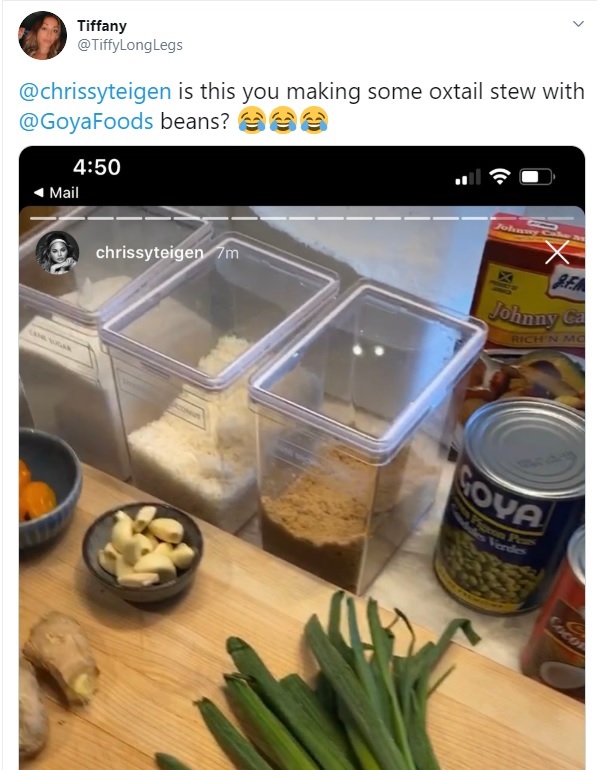 Keep in mind that Teigen’s original tweet vowing to boycott Goya specifically mentioned “how good the beans taste.” Teigen’s admiration for the quality of Goya’s products apparently trumped her desire to preserve the image of herself as a cancel culture-supporting social justice warrior.

In fairness to Teigen, maybe she bought the Goya peas before she decided to boycott the company. Still, the fact that she would seek to hurt a company that employs thousands of Americans over a petty political difference says a lot about her character.

The point behind the actions of Teigen and everyone else calling for a Goya boycott was obvious. They wanted to blackmail Goya CEO Robert Unanue into walking back his praise for Trump.

Unfortunately for the anti-Goya mob, Unanue refused to back down. During an appearance on “The Ingraham Angle” shortly after his appearance at the White House, Unanue had two simple words for those demanding he apologize for complimenting Trump: “Hell, no.”

As it turns out, left-wing celebrities’ call for a Goya boycott had exactly the opposite effect that they had hoped for. Nationally known conservative figures, including Mark Levin, Laura Ingraham and Tammy Bruce, took to Twitter and urged their followers to support the Hispanic-owned company.

Casey Harper, a former reporter for The Daily Caller and The Hill, started a GoFundMe page seeking donations that would “be used to buy GOYA products that will be given to food pantries in the Washington, DC area.”  “What if we rise up to say no to cancel culture AND feed the hungry at the same time?” he asked.

Donated funds will be used to buy GOYA products that will be given to food pantries in the Washington, DC area.

What if we rise up to say no to cancel culture AND feed the hungry at the same time?https://t.co/1u7SAiC2oS

Within 72 hours of launching the GoFundMe campaign, Harper had raised more than $160,000. By mid-afternoon Sunday, it had raised an astounding $329,832.

While Goya may no longer have liberal celebrities buying its products, it looks like it might have more conservatives supporting the company than ever before.

This phenomenon is not unique to Goya. As MyPillow CEO Mike Lindell, an outspoken Trump supporter explained, “As long as you don’t back down to this stuff, this cancel culture and all these boycotts and all this stuff, it’s absolutely amazing how the business goes up every time something like this happens.”

According to Lindell, it’s only a “small group” of people who actually do end up boycotting companies when their CEOs dare to say nice things about the president they hate. While this group of people may seem like the majority on Twitter, they are far from a majority in real life.

Liberal celebrities should have learned the clear lesson from the 2016 presidential election: Average Americans don’t care what they think. If they did, then there would have been a President Hillary Clinton.

Yet, liberals and the proponents of cancel culture, which have basically become one and the same at this point, seem to have trouble learning lessons. Cancel culture has now decided to target the 1990 movie “Kindergarten Cop” over its portrayal of law enforcement in a positive light.

While the First Amendment gives the leftists in cancel culture the right to call for boycotts, it also gives everyone else in America the right to call them out for their stupidity and hypocrisy. As Chrissy Teigen’s decision to use Goya products despite calling for a boycott demonstrates, left-wing hypocrisy knows no bounds.

An anonymous donor will cover the cost of the funerals of the children and teachers killed in the Uvalde, Texas, school shooting.
By Jack Davis  May 28, 2022

National anthem protests are back in style, this time in Major League Baseball.
By Jack Davis  May 28, 2022
Next