For the ultra-woke, a salute to the flag is now a personal assault.

In what might be the most repulsively reflexive moments of anti-American feeling among a disturbingly vocal segment of the population, a stirring, three-minute salute to Old Glory that aired before Sunday’s Super Bowl was getting treated by some social media commentators as a deliberate slam to the NFL’s anthem kneelers.

For the leftists, of course, it was taken as pure propaganda.

Advertisement - story continues below
Trending:
Republican Shouts 3 Words at the Top of His Lungs After Biden Mentions Fentanyl Deaths

But for the sane majority of the country, the Fox video of “Ragged Old Flag,” featuring Medal of Honor recipient Marine Cpl. Kyle Carpenter, was like a shot in the arm.

Ragged Old Flag by Johnny Cash to start the Super Bowl? Inject it into my veins please pic.twitter.com/267yyG2YOo

In case anyone missed it on Sunday, or just wants to see it again, here’s the Fox video:

It’s one of the most popular pieces by country icon Johnny Cash, whose spoken-word ode to the Stars and Stripes was released in April 1974, a year when a bona fide impeachment investigation (as opposed to today’s partisan impeachment sham) was roiling the country’s politics and American military involvement in Vietnam was heading toward its dispiriting end.

Despite the years that have passed since then, the imagery in the video that aired Sunday — from military monuments to archival footage of protesters burning the flag — couldn’t help but resonate with current controversies.

And that, of course, meant some liberals took it completely the wrong way — like it was a Super Bowl-sized dog whistle for racism in the United States. 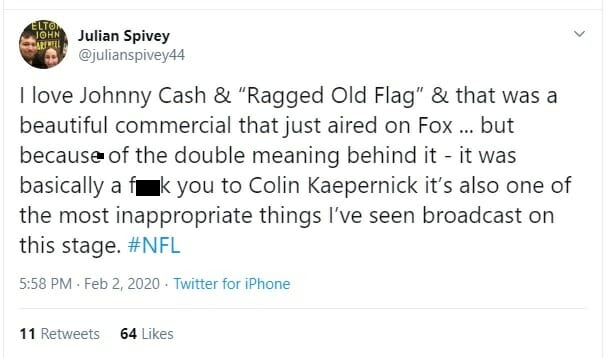 F*ck that ragged old flag and the inequality and racism it stands for. Educated people know that flag was created for and by people who owned slaves and saw my people as nothing but property to be abused, sold, and destroyed. pic.twitter.com/KwEK4uxBkE

Why does this commercial feel racist ? #RaggedOldFlag

But try as liberals might, it’s not easy to find racism in either the words or the video.

Starting about the 1:20 mark, in fact, the 10 seconds or so of a black Union soldier carrying the flag while Cash intones “the South wind blew hard on that ragged old flag” is pretty much a direct repudiation of the Confederacy — and the theories of slavery and white supremacy that the Confederacy’s Democratic Party overlords proclaimed.

Fortunately for the fate of the Republic, the audience that was elated by the Fox presentation was a good deal larger than the snowflakes who melted down at the sight of patriotism.

And many were convinced that Fox was sending exactly the kind of message they could relate to — one that directly answered the anthem kneelers and the most famous face of the protest movement, former San Francisco 49ers quarterback Colin Kaepernick.

“This old flag was a wonderful slap in the face @Kaepernick7,” one wrote.

He needed to be slapped in the Face!! That Flag has stood for the Freedom you enjoy to be able to run your mouth as the right has been secured for you and that waste of human flesh by Men who served and made the Ultimate Sacrifice so Enjoy and Say THANK YOU!!!

This pre game American commercial with Kyle Carpenter with Johnny Cash singing Ragged Old Flag in the background is already the highlight of the Super Bowl. This is incredible ??

A salute to the flag, and to the Republic for which it stands, isn’t a political statement, it’s a statement of fact, whether the anthem kneelers understand it or not.

American citizens owe their liberties to Founding Fathers who established this country, to the men — and sometimes women — who have fought through the years to make sure it remained free, even when that meant killing fellow Americans.

For the vocal but small segment of the population that didn’t, it’s well past time that the ultra-woke wake the hell up.