Welcome to the new post-tax reform world where the U.S. again can compete for global business. 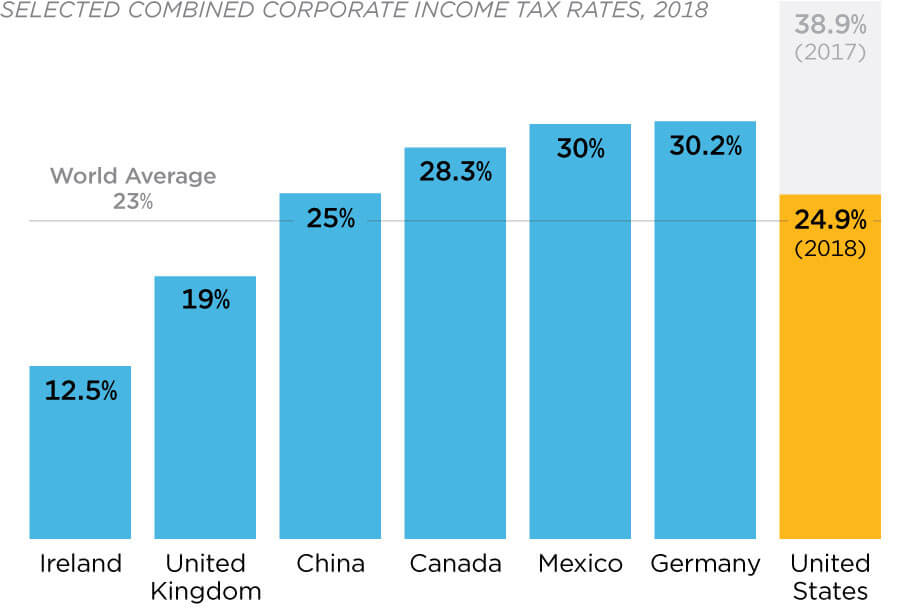 Those who opposed tax reform and lowering the corporate tax rate claimed it was a tax cut for the wealthy at the expense of everyone else.

They were wrong. A tax cut for businesses is a wage increase for workers.

Corporations employ 54.8 million people in the United States, and research shows U.S. workers pay about 75 percent of the corporate tax through reduced wages.

Americans also benefit when businesses reinvest their tax cut to increase profits. About 40 percent of corporate stock is owned through retirement plans and more than half of Americans are invested in the stock market.

So whether it is through higher wages or bigger retirement accounts, workers and investors benefit when businesses flourish.

Do you think reforming the tax system has been President Trump's greatest accomplishment in office?
Yes: 96% (25 Votes)
No: 4% (1 Votes)

Also, since the passage of tax reform, businesses have increased wages, paid out bonuses and made large investments in America.

More than 450 companies have announced bonuses, pay raises or better benefits — including American Airlines, AT&T, Bank of America and Comcast. Americans for Tax Reform is tracking all the good news here.

Fiat Chrysler announced it will move some of its manufacturing plants in Mexico back to the United States. The company will invest more than $1 billion in its Detroit plant, which will create 2,500 jobs.

“It is only proper that our employees share in the savings generated by tax reform and that we openly acknowledge the resulting improvement in the U.S. business environment by investing in our industrial footprint,” Fiat Chrysler CEO Sergio Marchionne said.

Tech giant Apple also announced it will invest $350 billion and add 20,000 employees over the next five years.

Related:
Op-Ed: The Demise of FTX Is Not Crypto's Problem

The U.S. lowered its corporate tax rate to encourage business investment and expand job opportunities across America, and it looks to be working. America is again a competitive place to do business.

But Congress should not lose sight of the long-run economic opportunities that good tax reform provides. For tax reform to succeed, federal spending will need to be constrained to reduce pressures to raise taxes in the future.

After all, to solidify the potential benefits of tax reform, the existing tax cuts must be made permanent, which will be hard if Washington runs trillion-dollar deficits every year.

A version of this article previously appeared on The Daily Signal website under the headline, “America Is Competitive Again, Thanks to a Lower Corporate Tax Rate.”

Adam Michel focuses on tax policy and the federal budget as a policy analyst in the Thomas A. Roe Institute for Economic Policy Studies at The Heritage Foundation.

Lauren Bowman is a research assistant in The Heritage Foundation’s Roe Institute for Economic Policy Studies.

Adam Schiff's time in the spotlight is over, and he's become as irrelevant as he was throughout his first 15 years in Washington.
By Elizabeth Stauffer  January 31, 2023

Police Chief Has Warning for Would-Be Intruders: 'We Live in Florida...Most People Are Armed'

The chief let would-be criminals know that residents in his county are armed and ready to defend themselves.
By Ryan Ledendecker  January 31, 2023

Bill Gates says in a new interview that his contact with Jeffrey Epstein was nothing more than a few dinners a long time ago.
By Jack Davis  January 31, 2023

The conservative media personality didn't hold back: "Wonder if she realizes what a wannabe she looks like ..."
By Michael Austin  January 31, 2023

A 15-year-old who went missing from her high school on Friday was found dead Monday at the school's football field.
By Jack Davis  January 30, 2023
Next