Dan O’Sullivan is a blue-checkmarked liberal freelance gadabout whose work has been seen in Vox, Vice and Atlas Obscura. He’s got some very strong opinions about COVID, you might not be surprised to learn.

A hyperbolic TL;DR summation of them: We should all bubble-wrap ourselves and stay at home until we’re all vaccinated — especially teachers and other members of public sector unions — and the fact the government isn’t paying us to do this is a complete disgrace.

Ball’s death brought up in the context of Dartmouth professor Brendan Nyhan noting that public sector unions are often an impediment to serious structural change Democrats wanted to enact. Those unions, as he pointed out, are an obstacle to criminal justice reform as well as liberal moves “to addressing climate change (mass transit construction costs absurdly high compared even to Europe) and keeping schools open during COVID.”

When will Ds reckon with problems in public employee unions in a serious way? Major obstacle not just to criminal justice reform (below) but to addressing climate change (mass transit construction costs absurdly high compared even to Europe) and keeping schools open during COVID https://t.co/LbF1SK1Fr0

No lies detected, but secular hell hath no fury like a liberal informed that organized labor isn’t an unalloyed force for good. (What’s really interesting is that Nyhan is clearly no conservative. He’s a contributor to The Washington Post and The New York Times, a fierce critic of President Donald Trump who co-authored a critical book about President George W. Bush.)

O’Sullivan hit back hard in a tweet that, like the rest of those used here, was deleted or restricted as of early Wednesday morning.

“Lot of generally horrible s— in this single tweet, beyond the heavy lifting police unions are doing in casting aspersions on all the other public workers. But castigating teachers *for not wanting to die of Covid* is beyond cruel,” O’Sullivan wrote.

O’Sullivan then linked to a Baltimore Sun article about Ball’s death.

WARNING: The following tweets contain graphic language that some readers will find offensive. 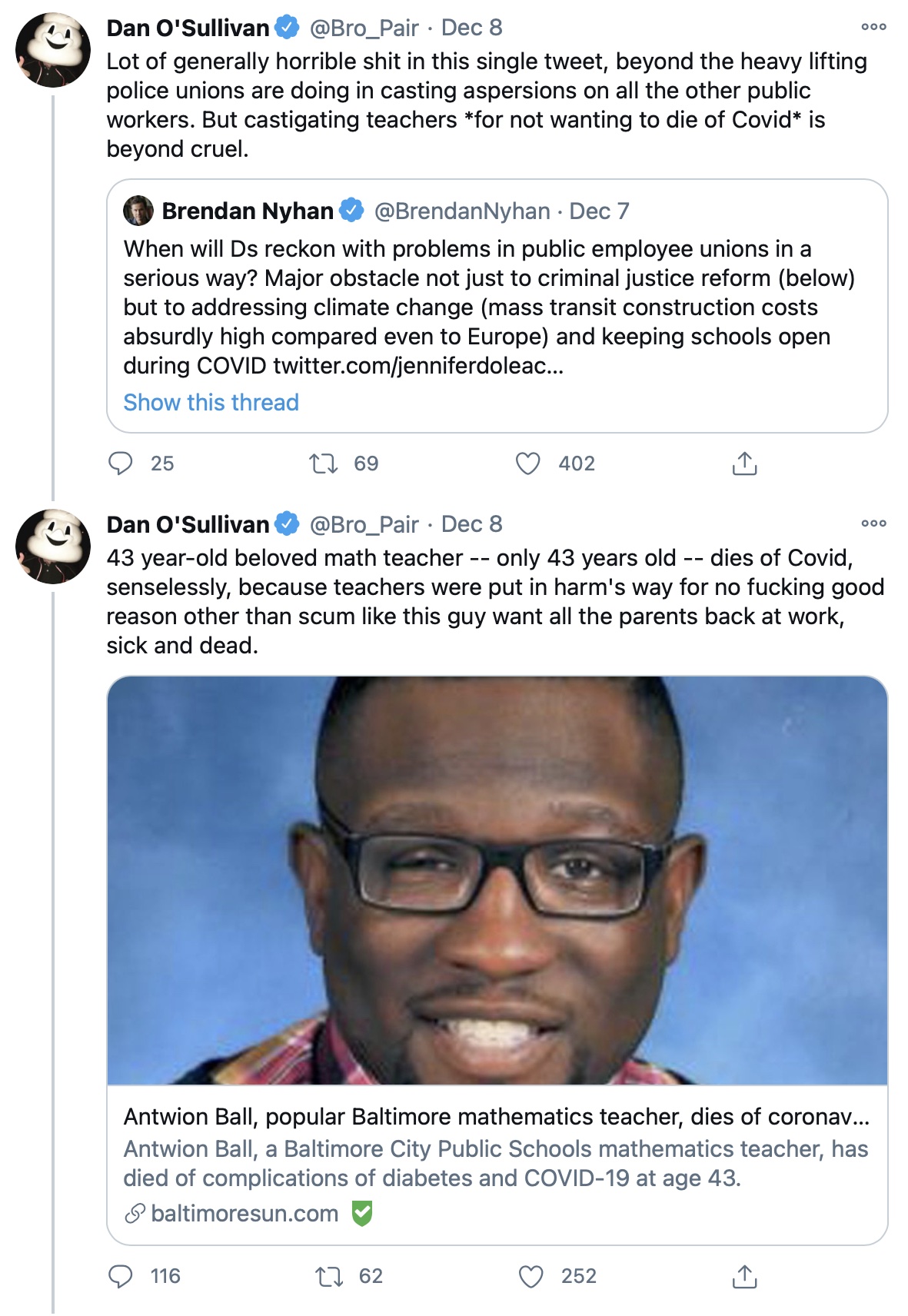 “43 year-old beloved math teacher — only 43 years old — dies of Covid, senselessly, because teachers were put in harm’s way for no f—ing good reason other than scum like this guy want all the parents back at work, sick and dead,” O’Sullivan tweeted.

We’d all agree this death is tragic news, but there’s one problem with searching up teachers’ obituaries until you find one that allows you to wave the bloody shirt and integrate an untimely death into the confirmation for your bias: You have to read the obituaries to be certain they make your case.

Three paragraphs from the close of Ball’s obit, there was this: “Most recently Mr. Ball left the Baltimore City Public Schools and taught briefly in the Baltimore County system and in Washington, D.C. His last post was doing virtual instruction for a school in Harlem in New York City.”

And yet, when Twitter users pointed this out to Sullivan, it was their personal failing.

At some point after he accused Mandel of salivating over the death of a black man, O’Sullivan realized he’d not only become a trending topic on certain political corners of Twitter but that it was almost certain Ball hadn’t contracted COVID-19 from the inside of a classroom (even a New York Times columnist has admitted school-related coronavirus transmission is rare). Like a gambling addict convinced one more hand will erase the night’s losses, he doubled down.

“The fash found this tweet and are having a lot of fun cackling that this beautiful man also had diabetes,” O’Sullivan tweeted. “Even virtual reopenings require teachers (including in my family) to reenter society needlessly. School year should have been canceled, everyone paid to be at home.” 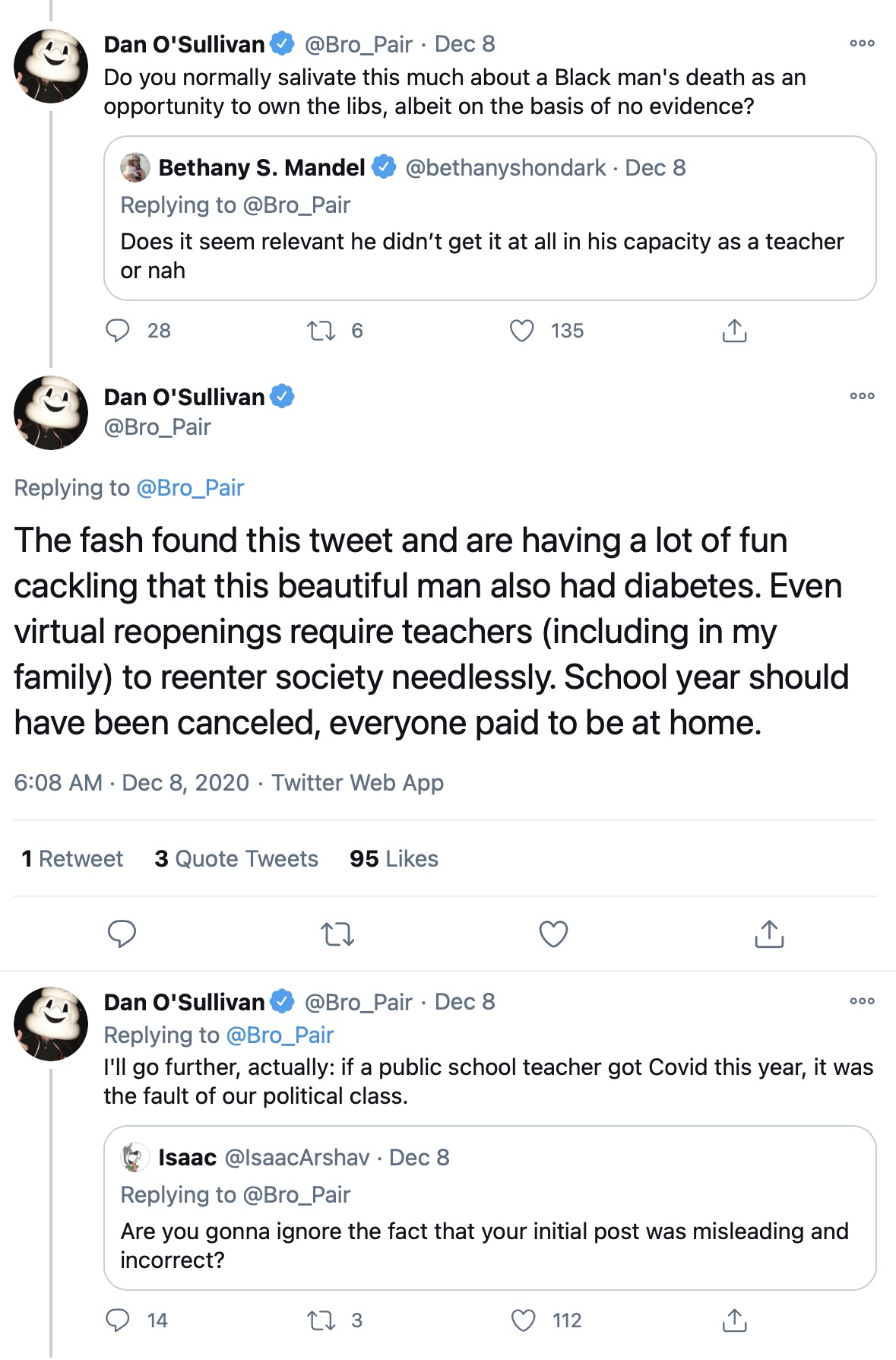 If you’re not hip with the lingo, “the fash” refers to conservatives — fascists, or “fash” — who found the tweet and noted the teacher had preexisting conditions and, again, hadn’t set foot in a school.

When asked if he would correct, O’Sullivan wrote that if any public school teacher gets coronavirus this year, it’s because politicians didn’t do something.

What? Who knows? But because kids had to take virtual classes, this teacher — who was divorced, according to his obituary — had to go out and get food and run errands for himself, which he apparently wouldn’t have to do otherwise. 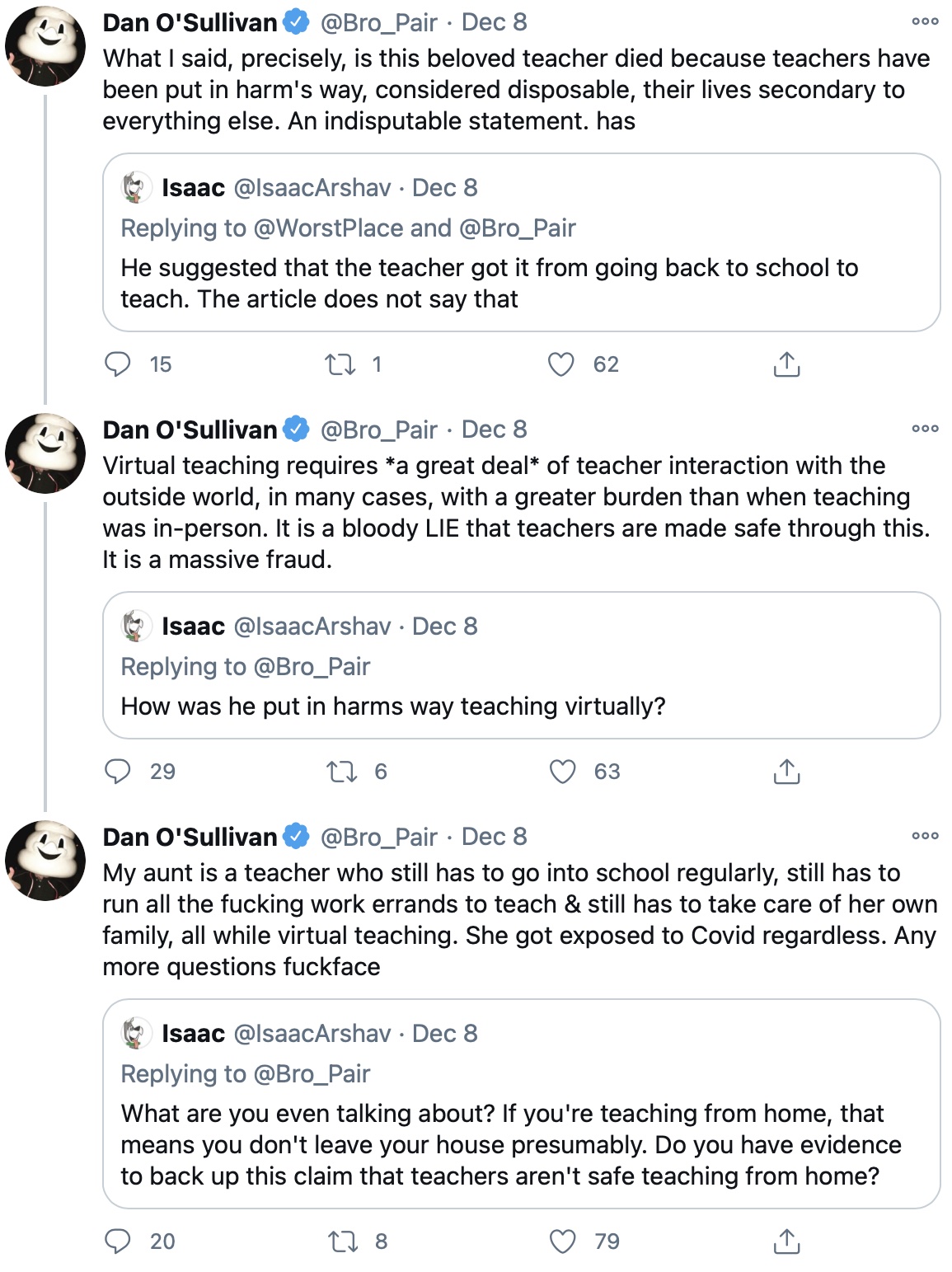 When someone mentioned the students’ parents had to go back to work, too, O’Sullivan implied that it was “the guiding impetus behind reopening schools when it was clearly insane to do so. Mom and dad have to get back to work, and probably get sick and die themselves.” In short, nobody should be working except for the people who make it possible for those people to not work and stay at home. They can just drop dead, I guess. 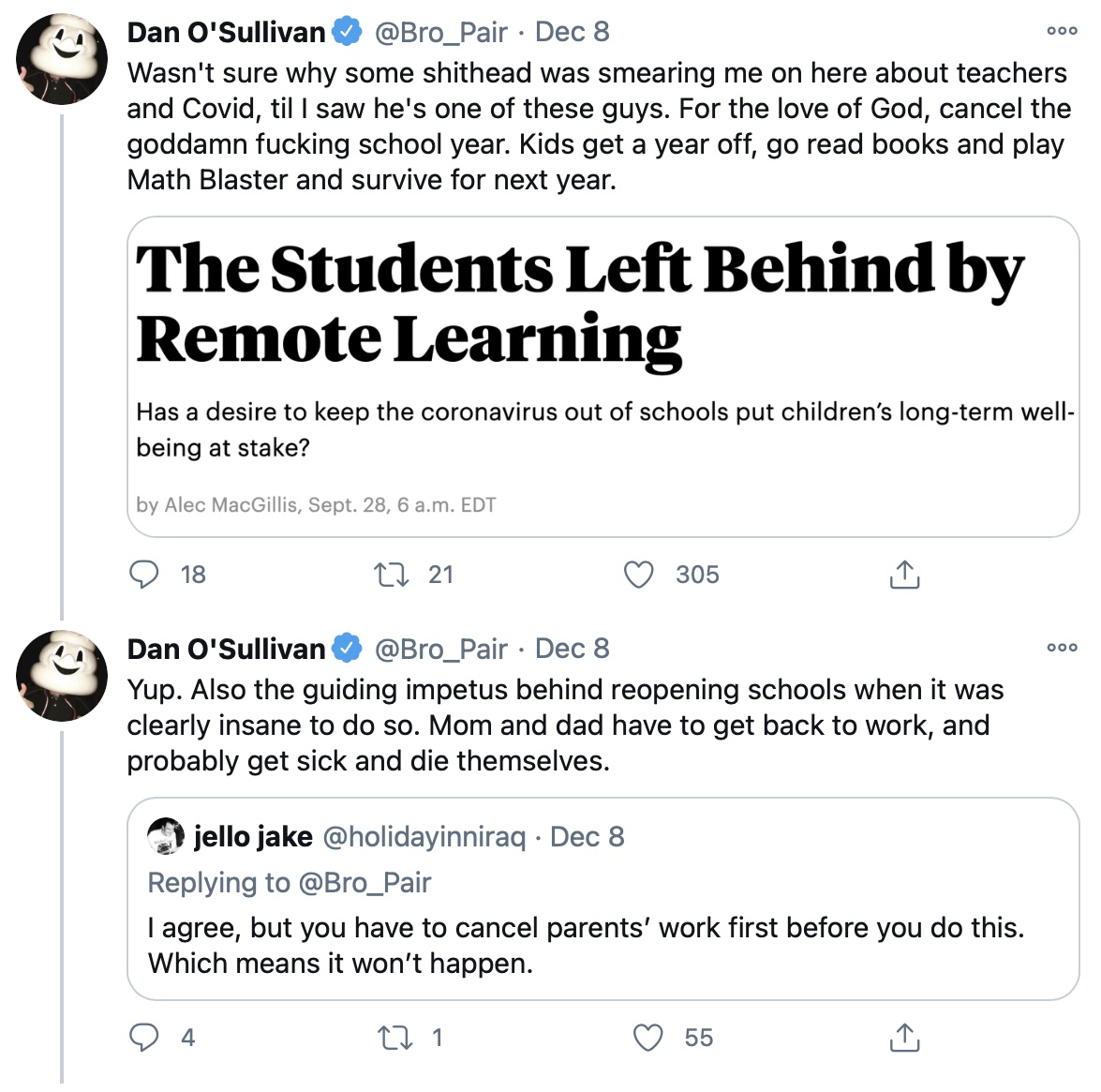 The great irony here is that, by pointing out O’Sullivan callously used the life of a teacher to make an erroneous argument, we’re all just “the fash” callously using the death of a black teacher to score points. Not that we wanted to; O’Sullivan was the one who brought the life of Antwione Bell into this. But this still isn’t proof in-person learning is dangerous.

In fact, there’s no evidence schools are a vector of transmission — but if you post an obituary, then curse enough and call people who disagree with you fascists or racists, you’ve proved your point.

That doesn’t mean the data backs it up. When New York City closed down its public schools, the positive test rate inside the system was well under 0.5 percent and Mayor Bill de Blasio admitted schools were safe. There’s no evidence that positive tests in New York City actually originated from inside the classroom.

But those who want in-person learning shut down don’t care about evidence. They care about emotional blackmail. And if you don’t buy into it, then what kind of stony-hearted racist are you?

For whatever it’s worth, O’Sullivan seems to have realized he’d gone too too far down the rabbit hole of Twitter hate. By late Tuesday, he was tweeting more about “What About Bob?” than closing schools and coronavirus deaths. 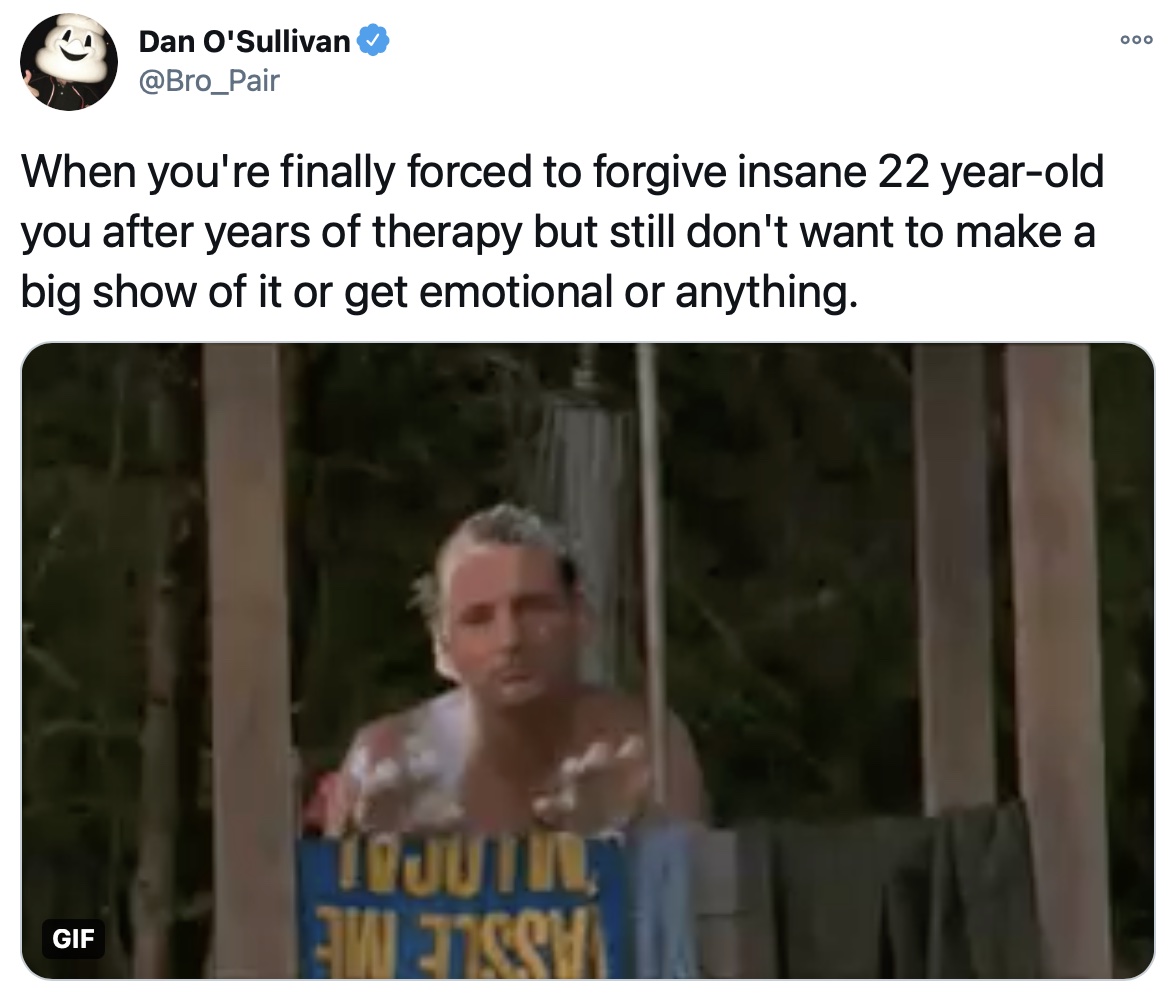 These baby steps toward decency, alas, apparently weren’t enough and O’Sullivan’s tweets were no longer available to the public.

That’s a shame, because he’s actually right regarding “What About Bob?”

Everything else is rubbish, however — and indicative of just how wrong the left is when it comes to in-person learning.

His symptoms started to show themselves after the Jets' game against the Chicago Bears Thanksgiving weekend.
By George Upper  December 9, 2022

To call President Joe Biden's border security policy a disappointment would be an insult to disappointments.
By George Upper  December 8, 2022
Next