A former U.S. Air Force intelligence specialist accused of espionage for Iran, Monica Witt, was allegedly radicalized in part during a stint at a George Washington University, which has taken $100 million from Saudi Arabia and other Muslim countries.

Certain American universities have received funding from the U.S. government with a partial goal of training students to be diplomats and intelligence specialists for the U.S., while simultaneously accepting financial donations from Middle Eastern countries. In some cases, the programs have been staffed by academics who are critical of U.S. policy and who publicly espouse fringe positions.

Witt was charged Feb. 13 by the Department of Justice with sharing government secrets with Iranian officials. She was allegedly helping create a cyber-hacking operation on fellow former agents. She is at large and believed to be in Iran.

Witt’s radicalization “was rooted in Ms. Witt’s military service and … accelerated while she was in graduate school” at Georgetown University, where she earned a master’s degree in its Middle East Studies program, The New York Times reported.

A classmate of Witt’s, Cory Ellis, told The Times that “everyone just kind of sat and watched” as Witt expressed strong feelings against American foreign policy in class.

The Times described GWU’s program as an “academic proving ground for aspiring diplomats and researchers near the State Department’s headquarters.”

Muslim-majority nations — plus a handful of private groups associated with them — have given $100 million to George Washington University in the form of gifts and contracts since 2011, according to Department of Education disclosures. That includes $80 million from Saudi Arabia, $14 million from Kuwait, $4.5 million from the United Arab Emirates and $730,000 from Turkey. Most of those countries gave as recently as June 2018.

The Middle East centers of Washington-area universities provide a direct line to shaping U.S. policy. In 2011, for example, GWU’s now-director of the Middle East studies program Nathan Brown testified before the House Permanent Select Committee on Intelligence, “We have no policy toward the (Muslim) Brotherhood. And let me stake out what might seem to be an odd position here: I do not think we need a policy.”

“Is the movement harboring a desire to pursue its agenda through forceful, even violent means? The answer to this question is clear: no,” he said, highlighting a comparison between the Muslim Brotherhood and the Boy Scouts.

Spokesmen for GWU have repeatedly ignored questions from The Daily Caller News Foundation about the foreign funding.

Even as GWU receives financing from Middle East interests, the Department of Education has used taxpayer money to amplify its ability to shape the way Americans think about the region. For 2019-2021, it received a quarter million dollars for “Foreign Language and Area Studies” of the Middle East from a U.S. taxpayer-funded program known as Title VI.

Title VI grantees often have a trickle-down influence that shapes how not only college students but young schoolchildren understand the Middle East.

The Education Department says that “In addition to supporting foreign language and area studies instruction and research, Title VI” recipients will “conduct outreach and develop programs that expand global opportunities for K-16 educators.”

TheDCNF found that nearly all the schools empowered to shape understanding of the Middle East in this way received funding from foreign nations from that region.

Related:
China Warns Assembled World Leaders They Risk Being 'Crushed by the Wheels of History'

This situation “has opened up a back-door route to Saudi influence over America’s K-12 curriculum,” a senior fellow at the Ethics and Public Policy Center, Stanley Kurtz, wrote in National Review in 2007. “Believe it or not, the Saudis have figured out how to make an end-run around America’s K-12 curriculum safeguards, thereby gaining control over much of what children in the United States learn about the Middle East.”

The Muslim nations awarded $603 million to the 12 universities from 2011 to 2016 — 80 times more than the allocated Title VI funding, TheDCNF found.

Only one Title VI recipient — Georgetown University — received more in funds from Muslim nations than George Washington University. Jonathan AC Brown, who serves as director of the Saudi-funded Alwaleed bin Talal Center for Muslim-Christian Understanding at Georgetown, has defended slavery because the prophet Muhammad had slaves, and his father-in-law was convicted of providing material support to terrorists.

On his Twitter feed, Brown has espoused radical political positions and has said Muslims who alert the FBI about other Muslims should be ostracized. 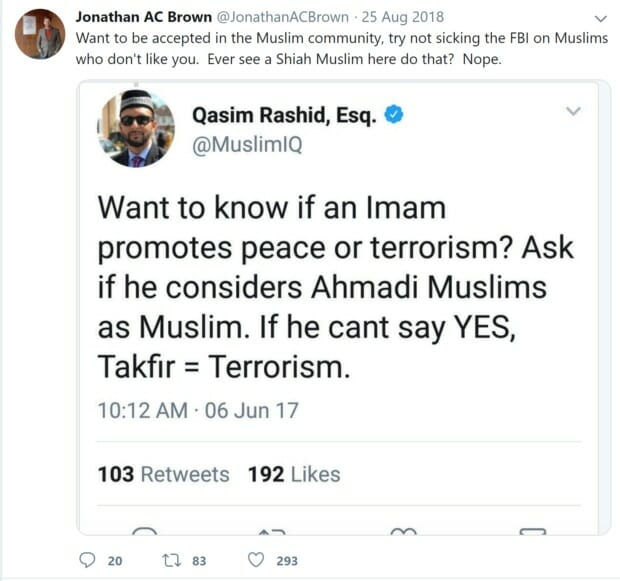