Report: Leftist DA Offers Rapist Easy Way Out - Blows Up in His Face When a Sex Crime Spree Unfolds

There’s always been the assumption of bias on the part of big tech when it comes to conservatives, particularly when that conservative is Donald Trump. That assumption was complicated, however, by the fact that tech companies — particularly social media concerns — maintained a veneer of plausible deniability.

That complication seems to have resolved itself in the past few weeks.

Twitter has begun (poorly) “fact-checking” the president’s tweets on voter fraud and then hiding one because the thought he expressed in it — “when the looting starts, the shooting starts” — was briefly popularized by a grotesquely evil Miami police chief over a half-century ago.

The phrase can also mean that looting can lead to violence, but whatever — it got covered up like the details behind a Hunter Biden sinecure.

Snapchat, meanwhile, went almost as far and refused to promote the president’s content, which it regularly does with politicians and celebrities.

Facebook’s Mark Zuckerberg, not precisely the head of an oasis of free thought, refused to do anything of the sort to the president’s posts — and faced an employee revolt because of it, which says a great deal about where the company’s head has been at for the past few years.

But it’s Twitter that gets the most focus, because it’s the president’s favorite social media platform. It turns out that the “fact-checking” and hiding of tweets wasn’t the only thing going on in the palace of Jack Dorsey.

Check out what happens when you search the term “racist” on the platform, as documented by The Western Journal’s own Bryan Chai:

Hey @Twitter @jack genuinely curious how your search algorithm works. Is it intentional for @realDonaldTrump to show up as the top search result when looking up “racist” under people? pic.twitter.com/YMxKrz84rw

Yes, it seems that Twitter’s search algorithm gives Donald Trump’s account as the top result when you search “racist.”

Let me guess: No bias! Just algorithmic! Can’t argue with them algorithms, after all.

I actually made this guess before I’d started doing research for this article and I was dispiritingly correct: “A Twitter spokeswoman said if users mention an account alongside certain terms, the account and the keywords can become algorithmically surfaced together as a search recommendation. A search on Twitter shows that users have been mentioning Trump’s account with the word ‘racist,'” C|NET reported.

In terms of intelligence-insulting explanations, the “don’t blame us, it’s just those kooky algorithms” ranks up there with “I’m leaving my position in the midst of a scandal to spend more time with my family.”

The idea that the software that undergirds social media is some kind of self-driving car and these executives never touch the wheel is prima facie ridiculous.

Related:
Biden Says Republicans Are Taking Credit for 'Bldhyindclapding' - Even the WH Has No Idea What He Meant

How do I know this?

Consider that, as I discussed at the beginning, Twitter is actively monitoring Trump’s account to the point where profoundly dubious fact-checks are being applied to tweets about voter fraud — fact-checks that entirely neglected to mention actual instances of voter fraud involving mailed-in ballots, like the alleged one perpetrated in North Carolina’s 9th Congressional District during the 2018 election, and insisted that voter fraud was a chimerical invention of the GOP — and then covered up one of his tweets because it was against their policy involving “glorifying violence.”

No hands on the wheel? Yes, the algorithm assembled that fact-check all on its own. Those algorithms, they’re really something.

Well, the thing about algorithms is that they’re fixed pretty easily when stuff like this, so given this has been happening for a few days, they’ve managed to make things — 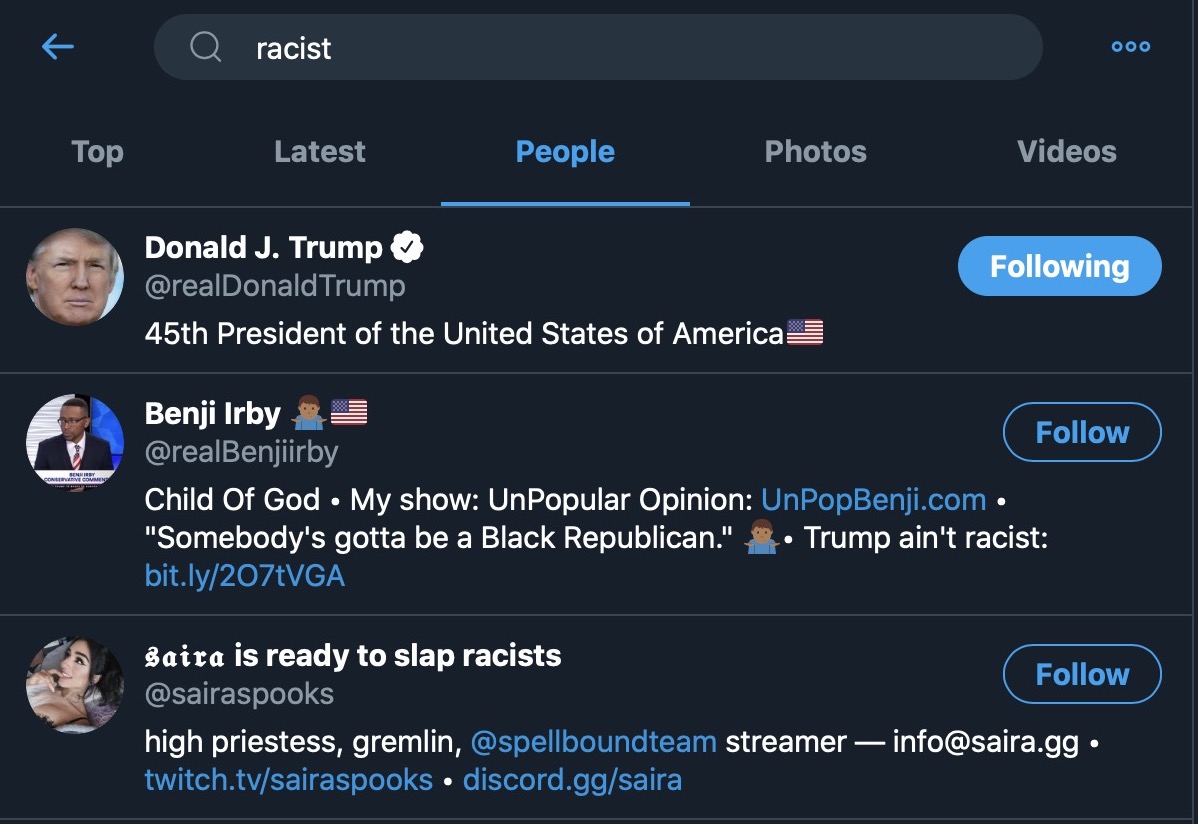 That’s 2:53 p.m. on Saturday. The algorithm must be resistant to change! It’s sentient, peeps! It’s probably calling everyone at Twitter “Dave” now.

All right, I know this game is about as tired and unwanted at this point as charades at an office party you don’t want to be at, but it’s time to play yet another round of “Imagine if this Were a Democrat.”

Let’s take Hillary Clinton. Imagine for a second that some term like this appeared in conjunction with Hillary in the same way during the 2016 campaign. It’d be fixed quicker and more thoroughly than an Italian soccer match.

In fact, we can test this with Trump’s opponent, Joe Biden. In a disastrous appearance on the black-centric radio program “The Breakfast Club,” Biden said that if you didn’t vote for him over Trump, “you ain’t black.”

That’s a pretty specific phrase, something that rascally algorithm would catch — right? 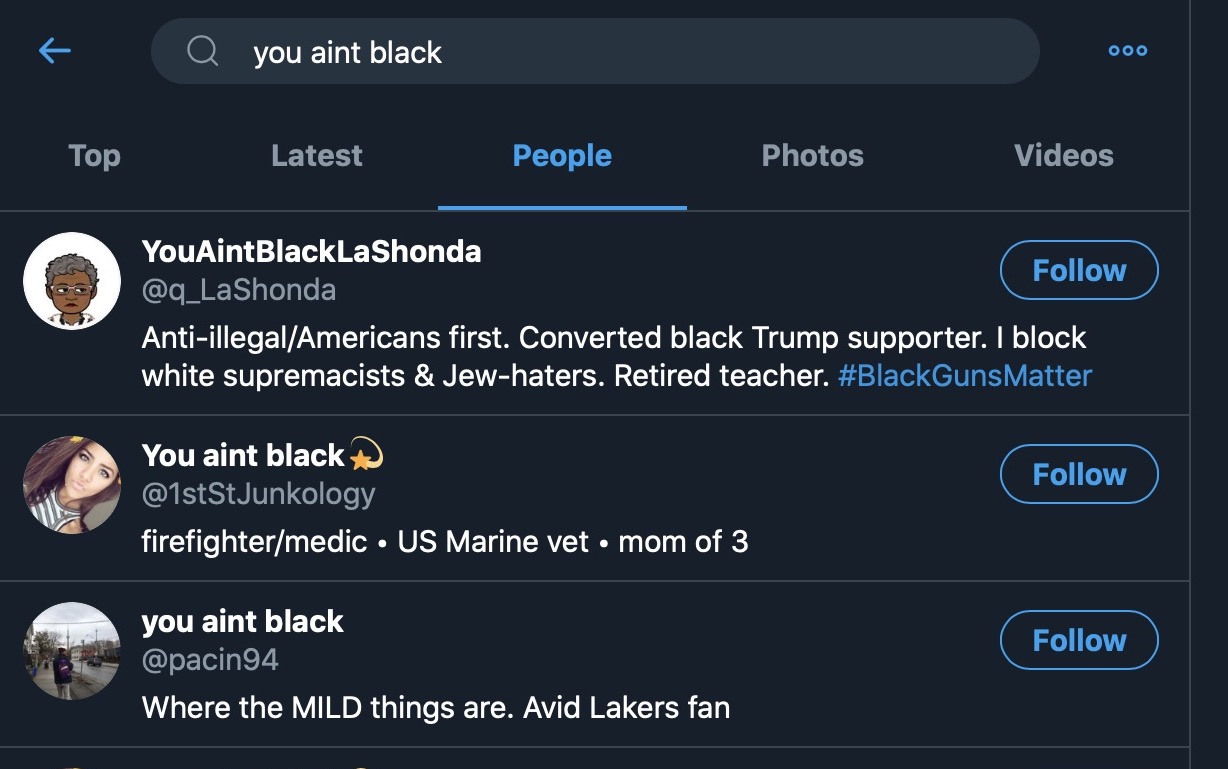 Right. The Trump algorithmic hiccup was reported on Friday. It’s mid-Saturday afternoon. Nothing.

Oh, and that wacky algorithm is at it again: The Trump campaign’s tribute video to George Floyd got taken down because of a copyright complaint. According to Fox Business, Twitter didn’t comment as to who made the complaint.

It’s probably worth noting that it’s not just a distaste for Trump that’s motivating tech firms at this point. In the wake of the fact-check controversy, Trump signed an executive order that would obviate Section 230 of the Communications Decency Act, a section of the 1996 bill protecting internet platforms like Twitter from being sued for content published by their users. The rationale behind Section 230 is that these platforms are platforms, not publishers. Of course, the difference is that publishers curate — and partisan fact-checking and hiding tweets for dubious reasons sounds a lot like curation.

“Trump’s executive order aims to reinterpret the law through new regulation. Online companies that moderate their websites in anything other than ‘good faith’ could face more lawsuits,” C|NET reported.

“The order directs the Commerce Department to ask the Federal Communications Commission to propose regulation that clarifies when a company isn’t acting in good faith. That includes when a company decides to restrict access to content but its actions are inconsistent with its terms of service or taken without adequate notice or a ‘meaningful opportunity to be heard.'”

Now, to rain on your party, conservatives: This has roughly zero chance of succeeding. The FCC and Federal Trade Commission, which would be tasked with enacting this, are largely independent agencies. This is good and bad — the bad, in this case, being the fact they’re what one might call “swampy,” which means it’ll likely be ignored.

Furthermore, essentially changing a major law enacted by Congress through regulatory means almost always ends in years of court cases — and while I’m not a lawyer, I don’t predict they’ll go swimmingly for the Trump administration.

That being said, it’s certainly added a new layer of animosity to the relationship between the administration and big tech — and, to quote a certain fictional newsman, “Well, that escalated quickly.”

It shouldn’t have. In an election year, this is nothing less than social media interfering in the outcome.

'I’ll tell you honestly, I’d rather be a POW in another country than a prisoner in my own country for saving lives.'
By George Upper  September 28, 2022

Despite a federal tax waiver, some states have rules on the books that could tax student loan forgiveness as income.
By Jack Davis  September 28, 2022

The article in Vanity Fair was the latest to chronicle what might happen if DeSantis and Trump were to face each other in 2024.
By C. Douglas Golden  September 28, 2022

On Wednesday, Katie Couric announced that she had been diagnosed with breast cancer earlier this year and had already undergone treatment.
By The Associated Press  September 28, 2022

Republicans recently rolled out their 'Commitment to America' inspired by 1994's 'Contract with America' that helped lead to a GOP landslide.
By Randy DeSoto  September 28, 2022

Aaron Rodgers admitted he was tipped off on the Buccaneers' play-calling by the home team's Jumbotron in a game-deciding play.
By Richard Moorhead  September 28, 2022

The prominent Democrat made the statement on MSNBC's 'Morning Joe' as she discussed 'climate change' and the midterms.
By C. Douglas Golden  September 28, 2022
Next