Both Joe Biden and President Donald Trump commemorated Veterans Day on Tuesday, as was to be expected. Also to be expected: A major difference in how their visits to memorial sites were covered.

Coverage of Biden’s visit to the Philadelphia Korean War Memorial included a a KYW-TV article with a quote from an attendee pointing out that it was “[r]eally, really, really cool” Biden made an appearance. The Associated Press, meanwhile, reported that the president’s visit to Arlington National Cemetery in Virginia “belies White House in tumult.”

Strangely enough, the president’s visit was also subject to a social media fact-check. Not because he made any claims in his post about it, mind you. Just because someone apparently wanted to rub in that Biden was declared the winner by the mainstream media over the weekend.

Note that he made no claims in it, nothing that could raise the hackles of the censors. That didn’t matter. 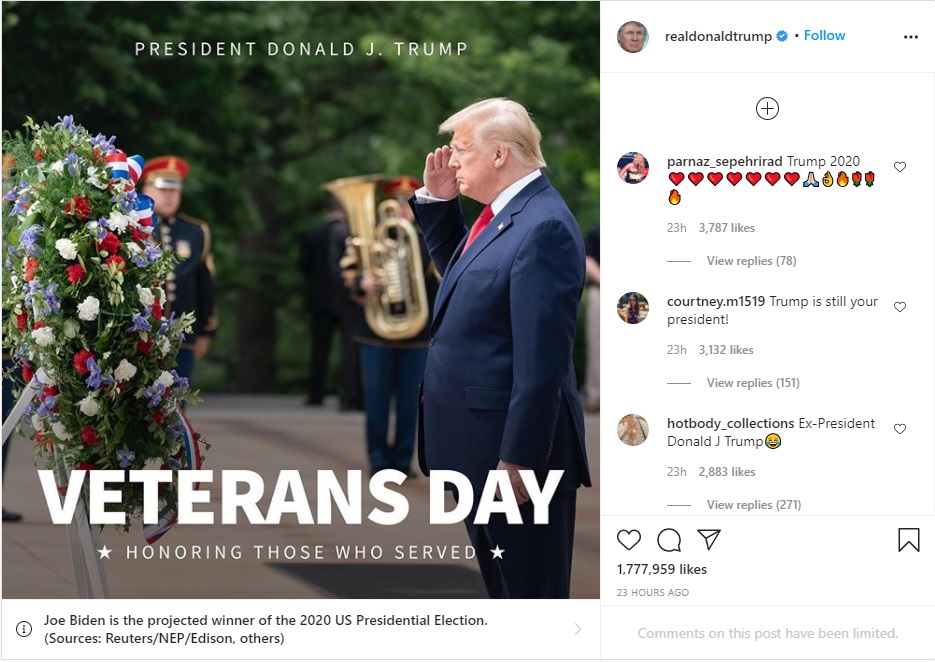 So, when the president commemorates Veterans Day, Instagram sees fit to tell us that “Joe Biden is the projected winner of the 2020 US Presidential Election.”

Follow the link out of morbid curiosity and you’ll see this: 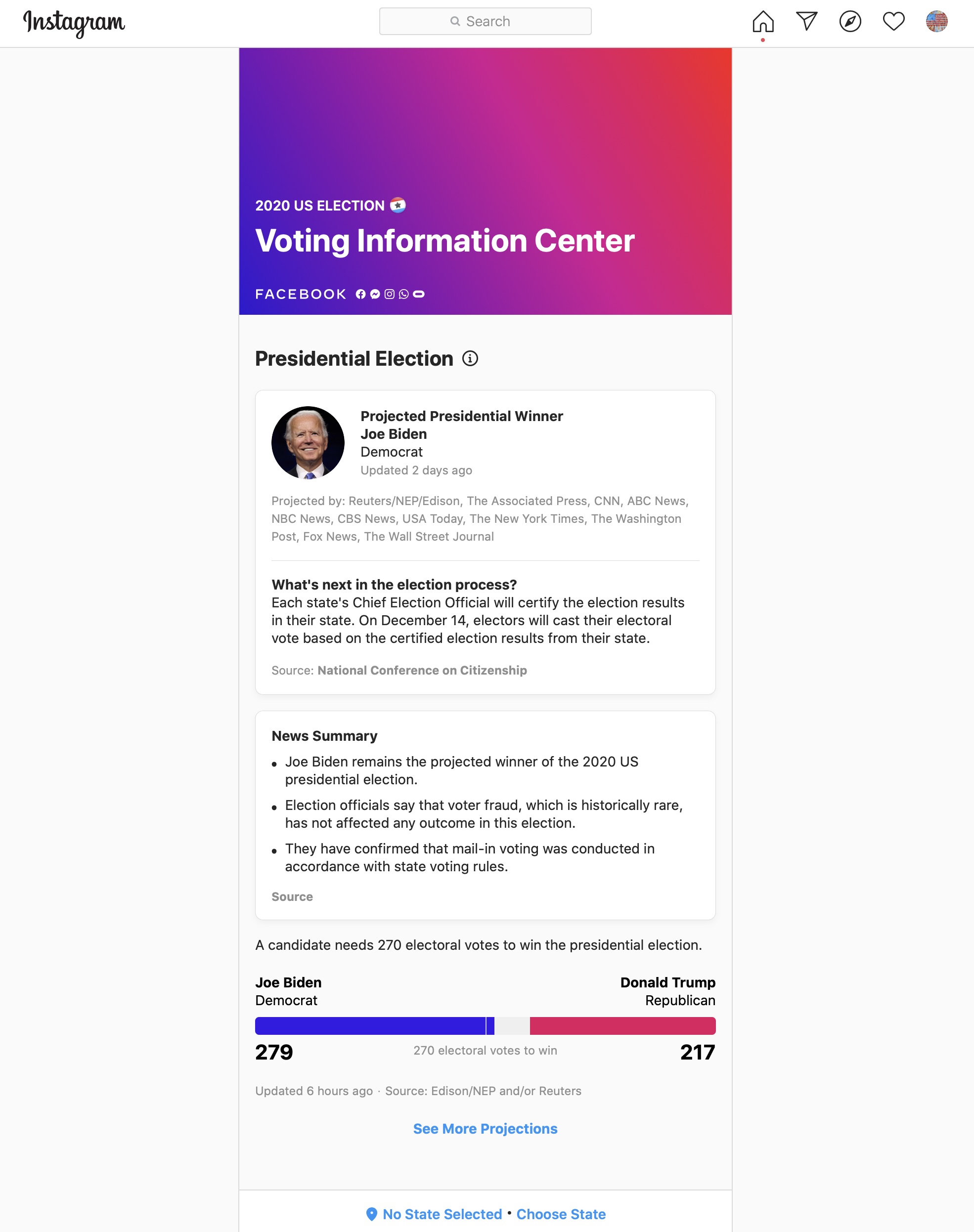 This was applied to a post that said nothing to the contrary. It’s the commander in chief visiting Arlington National Cemetery. The addendum is wholly extraneous; no one who was reading it didn’t know this is the mainstream media party line.

I’m curious what the impetus behind this was. Let’s say some readers don’t believe the election has been settled fairly. Perhaps they think the affidavits that have been filed by poll workers and Postal Service employees are suggestive of voter fraud. Maybe they don’t believe election officials are being fully forthcoming or nonpartisan in the matter, or that mail-in voting wasn’t conducted in accordance with established rules.

These hypothetical readers go to President Trump’s Instagram page and see a warning attached to the bottom of the Veterans Day post that says “Joe Biden is the projected winner of the 2020 US Presidential Election.” They follow the link, see Biden’s smiling visage and some desultory bullet points.

Like Saul in Damascus, after being dumbstruck by the presence of the Lord on the road, the scales fell from their eyes: “Whoa,” one exclaims. “And here I thought there was evidence of irregularities. But now Instagram is saying Biden’s the winner. How could I have been so blind?”

If the culture of misguided paternalism is so strong at Instagram (which is owned by Facebook) that its employees legitimately saw something like this scene playing out on the other side of the iPhone screen, it’s going to be a cold four years for the content moderators there.

I’m going to operate under the assumption they didn’t, however, and this was all part of the media’s misguided attempt to use Veterans Day as a canvas to paint the narrative of bitter clingers in the White House against a blandly victorious Joe Biden.

Here’s the first sentence of the AP’s story: “Donald Trump spent 10 minutes in public Wednesday honoring America’s war veterans — a veneer of normalcy for a White House that’s frozen by a defeated president mulling his options, mostly forgoing the mechanics of governing and blocking his inevitable successor.”

Hello to you, too.

Meanwhile, here’s a graf from KYW-TV’s coverage — the source of the quote from the gentleman who thought Joe Biden’s appearance was “[r]eally, really, really cool”:

“President-elect Biden, who was masked for the entirety of the ceremony, was dressed in a dark suit for the event. As he stood to the side of the memorial, he was seen on multiple occasions placing his hand over his heart and returning the salutes of military personnel.”

More unbiased stuff: “Veterans at the meet-and-greet who proudly donned their gear were pleasantly surprised to spot Biden in the city that helped Pennsylvania land him the title commander in chief.”

“I think it’s great. It shows the type of person he is as a president,” Lank Sanders told KYW. “I’m looking forward to what he’s going to do over the next four years.”

“I hope this new administration will bring a lot of peace and unity and maybe move forward a little bit,” said Steve Charanella.

An NBC News story, meanwhile, focused on the fact  that Trump and some of his entourage didn’t wear masks at Arlington, while Biden wore two masks during his appearance in Philadelphia. This is a thing for Biden:

For Joe Biden, two face masks are better than one in the era of COVID-19 https://t.co/wxk5PmKBKA via @USATODAY

This isn’t to denigrate mask-wearing so much as it is to question the prophylactic qualities conferred by wearing two of them. There aren’t any, and it’s blatant COVID-19 theater, but you’re not going to hear that called out.

All of which is to point out that to the media — and to Instagram, apparently — Veterans Day isn’t about veterans, at least when President Trump and Joe Biden are involved. Even as the president honors those who serve, we need to be told the election wasn’t called in his favor. And for what end? Nothing.

Big tech has made it clear to Americans what political side they’re on. America needs to remember that.

This was not only an ill-conceived attempt at a roast but also another example of the left-wing bias in the media.
By Peter Partoll  November 30, 2022

Critics of CNN didn't waste the opportunity to take a shot at the cable news organization, which thrived when it bashed the Trump presidency.
By Ryan Ledendecker  November 30, 2022

California Republicans Made Massive Gains in 2022 with New Election Strategy - Is This the Key to Winning 2024?

Democrats have shamelessly used this tactic for years. But now that Republicans are using it and winning, the Dems are mad.
By Ole Braatelien  November 30, 2022

A new report says Facebook has been getting private financial information from Americans who use tax filing services.
By Jack Davis  November 30, 2022

The impact from the SUV caused a chain reaction of exploding fireworks in the store, which then caused the building to go up in flames.
By Elizabeth Delaney  November 30, 2022

Elon Musk fired back at Democrats, claiming they chose to attack him at the same time. "It was coordinated."
By Chase McCown  November 30, 2022

Is Meghan's Podcast Finally Coming to an End? She Exits with 1 Telling Line on Final Episode

The Duchess of Sussex's cloying self-centeredness and desperate need for public validation were on full display in her podcast.
By Samantha Chang  November 30, 2022

'We Are Heartbroken': Prominent Celebrity Trainer Dies Unexpectedly at 53

The celebrity trainer and fitness personality Eric Fleishman suddenly died at home on Thanksgiving. The cause of his death is still unknown.
By Abby Liebing  November 30, 2022
Next