More than a year before the 2020 presidential election, then-candidate Joe Biden made an unequivocal promise.

At a campaign event on Sept. 6, 2019, Biden approached a woman who had questioned him and grabbed her hand.

This event should have been disturbing not only because of Biden’s propensity to get a bit too close to unsuspecting women, but also because of what he said. A president promising to “end fossil fuel” presented a serious threat to the country.

Many people assumed Biden was all bark and no bite when it came to punishing oil and gas companies. To be fair, he has broken plenty of promises during his career, and he had to know what kind of backlash he would receive when gas prices skyrocketed as a result of his own actions.

Sadly, Biden has dedicated the first year-plus of his presidency to keeping this promise, and now, he is trying to blame someone else for the consequences.

As Americans struggle to afford gas at the pump, Biden administration officials have said Russia is to blame for the exorbitant prices. President Vladimir Putin’s aggression, these officials say, has forced the United States to sanction him and in turn face higher prices.

While the war between Russia and Ukraine has contributed to recent price increases, the fact is that gas prices were soaring well before Russia invaded Ukraine. Biden’s war on fossil fuels is directly to blame.

The Republican Study Committee (RSC) analyzed every action Biden took against energy in the first 15 months of his presidency, and they compared them with the average price per gallon of gas during the same week. The results showed just how detrimental Biden’s presidency has been to everyday Americans.

A Promise Kept_Biden’s … by The Western Journal

When Biden took office on Jan. 20, 2021, gas was averaging $2.38 per gallon, the committee found. On that day, Biden issued a Climate Change Executive Order “requiring agencies to review and revoke Trump’s pro-American energy rules and actions throughout the executive branch.”

Biden also revoked the Keystone XL Pipeline, issued a moratorium on oil and gas leasing in the Arctic National Wildlife Refuge and revoked Trump-era policies that had decreased regulations on federal land.

During the next couple weeks, Biden took many more actions against oil and gas production in the U.S. They included calling on federal agencies to achieve “carbon neutrality” by 2025 and issuing a moratorium on new oil and gas leases on public lands, among other things.

On March 11, 2021, Biden signed the American Rescue Plan Act. It included a $50 million slush fund dedicated to “environmental justice” groups and another $50 million of grant money for the Clean Air Act aimed at clamping down on “pollution-related activities,” the RSC reported.

After swaths of other small attacks on the oil and gas industry, the average price per gallon eclipsed $3.00 by the week of May 17, 2021. The following week, Biden issued revenue proposals for the 2022 fiscal year that included almost $150 billion in tax increases for oil and gas companies.

Over the next few months, the Biden administration continued taking action against the oil and gas industry, as well as using other departments to convince Americans attacking fossil fuel was a good idea.

An example of this came on Sept. 9, 2021, when the Department of Education announced a Climate Action Plan “to incorporate the green agenda into as many guidance and policies as possible,” the RSC found. If that sounds like communist-level propaganda from the government, that’s because it is.

The U.S. Department of Labor, Department of Agriculture and Department of Energy also announced their own Climate Action Plans by October, and each promised to focus on or subsidize “green” energy sources instead of fossil fuels. By the week of October 18, 2021, gas was averaging $3.32 per gallon.

On Nov. 19, 2021, Biden’s Build Back Better plan passed the House of Representatives. It included increased royalties for oil and gas production both on and offshore and an $8 billion tax on companies producing, transmitting or storing oil and gas starting in 2023.

Build Back Better also included a 6.7 cent increase on the tax per barrel of crude oil. According to the RSC, this amounted to a $13 billion tax increase.

While more sensible Democrats in the Senate have stopped the plan from becoming law, the fact that Biden proposed it showed just how indifferent he is about gas price increases for Americans.

The average price per gallon went down a few cents to $3.28 during the last week of 2021, but it didn’t last long. On Jan. 13, 2022, the Department of Energy announced plans to hire 1,000 Clean Energy Corps employees. The RSC said the group was “dedicated to Biden’s promise to destroy fossil fuels.”

Biden also nominated radical anti-energy activist Sarah Raskin for Vice Chair of the Federal Reserve, but her position that fed policy should reflect environmental policy caused intense backlash and forced the nomination to be withdrawn.

By the week of Feb. 7, 2022, gas was up to $3.44 per gallon. After a judge blocked the Biden administration’s attempt to increase production costs by invoking the “social costs of carbon,” the administration responded by pausing all new oil and gas leases on federal land on Feb. 19.

By the time Russia invaded Ukraine on Feb. 24, gas was already averaging $3.53 per gallon in the U.S. This was an increase of $1.15 per gallon since the day Biden took office.

Since the invasion, gas prices have increased another 71 cents. At the same time, the Biden administration has continued taking action against oil and gas companies, the RSC found.

On March 16, the Biden administration reinstated its “social costs of carbon” metric after the 5th Circuit Court of Appeals reversed the previous ruling that had blocked it. A week later, the U.S. Securities and Exchange Commission proposed a rule that would require public companies to disclose their greenhouse gas emissions.

According to the RSC, the result of this rule along with the social costs of carbon metric would be “artificially disincentivizing oil and gas production.”

All in all, the RSC found 81 specific ways in which Biden administration policies have directly targeted the oil and gas industry since Biden took office.

That brings us to today, when gas is averaging $4.25 per gallon in the U.S. according to AAA. While multiple factors have led to the increase, it is clear that Biden’s war on oil and gas is a major contributor.

Biden may not have kept many of his promises throughout his career, but so far, he is working hard to achieve his pledge to eliminate fossil fuels. Regrettably, the promise he has chosen to keep is one that could cause irreparable damage to the country.

This journalist confronted Texas Sen. Ted Cruz at a vigil for the Uvalde victims - but it probably didn't go the way he thought it would.
By Abby Liebing  May 26, 2022

Republicans blocked a Democratic bill that would screen the military and law enforcement for 'neo-Nazi' infiltration.
By Richard Moorhead  May 26, 2022 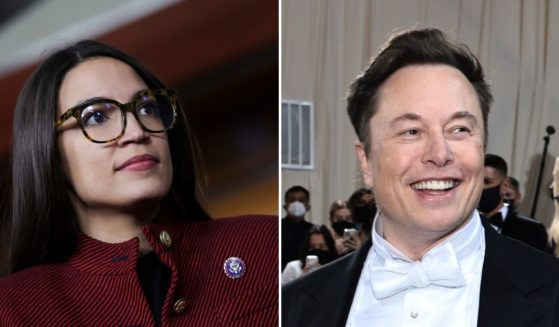 The Houston Fire Department department was ready and willing to take extreme measures to get the stranded victims down.
By Amanda Thomason  May 26, 2022
Next