If officials in California’s liberal Bay Area can get the message, maybe anyone can.

Redwood City, just south of San Francisco, decided last week to remove a mural with the words “Black Lives Matter” painted on a city street after a Donald Trump supporter requested permission to put in her own sign proclaiming “MAGA 2020,” according to KPIX-TV.

City officials said the “BLM” sign suddenly was a distraction for drivers, according to KPIX, but the real issue appears to be backlash for using public property for specific political points – and there might be a lesson  there for President Donald Trump’s supporters across the country.

The Trump supporter, Maria Rutenburg, explained her reasoning in a Twitter post after the BLM mural was scrubbed.

@IngrahamAngle I asked Redwood City to allow me to paint MAGA2020 next to BLM on the Broadway. Instead, they are erasing BLM. I stand for the 1st Amendment and everyone ‘s right to express their political views in a new public forum of street asphalts.

According to KPIX, the “Black Lives Matter” mural was requested by city resident Dan Pease, who painted it in big, yellow letters on Broadway Street, one of the city’s main thoroughfares, as part of a Fourth of July public art celebration.

The city not only agreed to allow the message – it even supplied the paint to put it down.

Check out the KPIX report here:

Rutenburg, a real estate attorney, said that because the city had made the street a public forum, it should be open space for a political message she favored – and one that isn’t popular in liberal San Mateo County.

“I saw a ‘Black Lives Matter’ sign appearing on Broadway Street on the asphalt, and I figured that’s gonna be a new public space, open for discussion, and I wanted to get my message out, too,” Rutenburg told KPIX.

Suddenly, Redwood City officials didn’t think large signs on city streets were such a good idea – a driving hazard and all that — and on Thursday washed away the poster-board paint it had given Pease to paint “Black Lives Matter.”

And it did it, according to KPIX, under cover of night.

Rutenburg, as can be expected in the dismal year of 2020, has faced a blizzard of attacks from leftists for raising the issue of a local government officially taking a political position – and if anyone argues “Black Lives Matter” isn’t a political statement in the current atmosphere, take a look at who got the movement started, and see how many officials praising the phrase or the movement are planning to vote Republican in November.

In a Facebook post Tuesday on the “Redwood City Residents Say: What?” Facebook page, Rutenburg described the rancor she’s faced, and every liberal of every age currently enjoying the frisson of supporting the Black Lives Matter movement ought to read it. 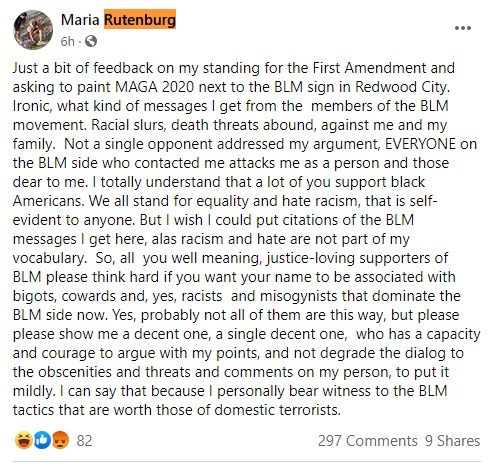 “So, all you well meaning, justice-loving supporters of BLM please think hard if you want your name to be associated with bigots, cowards and, yes, racists and misogynists that dominate the BLM side now. Yes, probably not all of them are this way, but please show me a decent one, a single decent one, who has a capacity and courage to argue with my points, and not degrade the dialog to the obscenities and threats and comments on my person, to put it mildly. I can say that because I personally bear witness to the BLM tactics that are worth those of domestic terrorists.”

Unfortunately, it was predictable that Rutenburg would get vicious backlash. A quick glance at social media posts shows efforts obviously aimed at intimidation and harassment (posting her LinkedIn profile, for instance.)

But she’s gotten plenty of praise, too.

WELL DONE! Thank you for opposing the racist message of “BLM” with one that should unite and elevate ALL law-abiding, working, patriotic Americans.

Nice work. I wish people like you would take similar action in large cities like NY, Seattle, Portland, Seattle, DC…

Great job calling out the hypocrisy on the left!

There’s a lesson there for Trump supporters across the country where local elected officials are making liberal politics the official stance of the government:

Do you expect more Americans to start standing up to the Black Lives Matter movement?
Yes: 96% (2499 Votes)
No: 4% (103 Votes)
Advertisement - story continues below

Even power-mad liberals can be forced to back down when Americans stand up for their rights.

(The mayor of  Washington, D.C., already is facing a legal fight over the decision to paint a huge “Black Lives Matter” mural on the street near the White House, according to the Washington Examiner.)

Despite the overwhelming bias of the mainstream media, the entertainment and cultural complex, and the disastrous Democratic Party, sane Americans understand that what Trump is doing is crucial to the country’s future if it’s going to defeat a parasitic left that threatens to drain it of vitality, creativity and, ultimately, freedom.

And that sane part isn’t vanishing without a fight. White guilt might wash in the Democrat-run cities where liberals — white and black — have made life miserable for minorities for decades, but the country as a whole understands more than the rioters in the streets or the politicians in power in urban strongholds.

If a city in California’s Bay Area can get the message, any place can.