For all the media’s insistence that Republicans are “obsessed” with the Democrats’ fringe-left squad of rookie representatives, it’s Democrats themselves who have elevated “the squad” to a position of real leadership in their Party by genuflecting before their outrageous grievance politics.

Trump’s tweets telling the four first-year congresswomen to “go back and help fix the totally broken and crime-infested places from which they came” forced House Speaker Nancy Pelosi’s hand.

Of course, before this fracas with the president even began, a civil war has been simmering just under the surface within the Democratic caucus.

It has revealed the exhaustive efforts of Pelosi to prevent the squad from sabotaging the Party’s electoral prospects in 2020 with their radical rhetoric, while they try to leverage their social media followings to pressure Pelosi into going along with them. Staffers from the House Democratic leadership and those from AOC’s office even went for each other’s throats recently, trading accusations of racism over social media.

Pelosi and her fellow establishment Democrats were all set to put the foul foursome on ice when Trump’s tweets forced them to close ranks around their controversial colleagues.

In what must have been a humiliating turn of events for the 79-year-old speaker, the obligatory racism accusations Pelosi made from the House floor in the squad’s defense actually got her ruled out of order. In an incredible turn of events, this occurred just days after the president himself even defended the speaker against charges of racism from the squad.

How did the squad thank Pelosi, their nominal leader, for her sacrifice? They threw her under the bus — again.

In an interview with CBS News, the foursome tore into Pelosi yet again, accusing her of refusing to “acknowledge the fact that we are women of color,” and arrogantly insisting that it is the speaker’s responsibility to reach out and arrange one-on-one meetings with them.

The squad can go on pretending they’re winning; that they’re the adults in the room or the real thought leaders of the Democratic Party. Nancy Pelosi and the Democratic leadership can keep acting as though they aren’t worried; that their looney-left upstarts are completely under control. Both sides, though, are just engaged in an elaborate charade.

The fact is, this is an absolute disaster for the Democratic Party. As Trump has pointed out, America is tired of these freshmen socialists and their “poor, oppressed me” schtick.

Their relentless harping about being “women of color” doesn’t make people find them less annoying. Their self-adopted “squad” moniker doesn’t make people imagine them as a fun-loving group of 20-something women on a night out like they seem to think it does.

AOC, Omar, Pressley and Tlaib are not supporting characters from Lena Dunham’s millennial-themed television show “Girls.” They’re woefully unqualified politicians who are telling people born in America they are less American than immigrants — even illegal ones — and that all Hispanics have a right to live in America because they have “native blood.”

The liberal media can’t get enough of “the squad,” but the American people are tired of this nonsense. For instance, leaked internal Democratic polling shows AOC’s approval rating at an abysmal 22 percent, despite widespread name recognition. Ilhan “I-probably-love-this-country-more-than-anyone-that-is-naturally-born” Omar’s approval rating is even lower, at just 9 percent.

Meanwhile, the fake “racism” controversy ginned up over President Trump’s criticism of the four leftist congresswomen is falling flat. Republican support for the president actually increased in response to “The Squad’s” freak out. Americans on a whole didn’t change their opinion much, except that there was a massive spike in the number of voters who see the Democrats’ use of the “race card” for what it is, a ploy to attack the President.

Rather than distancing themselves from these toxic personalities, Democrats simply bent the knee to their new socialist leaders. On Wednesday, Speaker Pelosi was forced to give a humiliating news conference downplaying her rift with the Fringy Freshwomen. Pelosi may wield the speaker’s gavel, but it’s clear that “the squad” is now calling the shots for the Democratic Party and won’t let go of the reigns anytime soon. 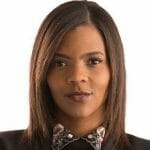 Candace Owens
Candace Owens is the host of "The Candace Owens Show" and is the founder of Blexit, a movement that encourages black Americans to break from the Democrat Party.
Candace Owens: Democrats on Bended Knee to 'the Squad' Is Real Takeaway from Trump Tweet Battle
See more...
Advertisement

Fox News has ended its relationship with Lara Trump, who had been a contributor for the network since March 2021.
By Jack Davis  December 5, 2022

Animal rights extremists were given the boot from a London steakhouse by the restaurant's waitresses, while patrons clapped.
By Richard Moorhead  December 5, 2022

Amid rumors his health is declining, Russian President Vladimir Putin is said to have had a concerning episode in which he soiled himself.
By John McCann  December 5, 2022

New reports say two major advertisers may be coming back to Twitter, including technology giant Apple, with whom Elon Mush has feuded.
By Jack Davis  December 4, 2022
Next