Two men were arrested Sept. 3 for allegedly attempting to conspire with and support the Palestinian terror organization Hamas.

Michael Robert Solomon and Benjamin Ryan Teeter, who appeared Friday in U.S. District Court in Minneapolis, Minnesota, believed their views aligned with those of Hamas, according to a statement from the Department of Justice.

Authorities said the pair, who are members of the Boogaloo Bois, wanted to work as “mercenaries” for Hamas, hoping to generate cash for their group.

In reporting on the allegations, CBS News referred to the Boogaloo Bois as a “far-right” group.

“Two self-described members of the far-right group Boogaloo Bois have been charged with attempting to conspire and become ‘assets’ for Hamas, the Justice Department said on Friday,” the outlet added.

“Hamas is designated by the U.S. as a terrorist organization, and the Boogaloo Bois is a loosely-connected group of far-right individuals who espouse a violent, anti-government ideology.”

But while CBS heavily implied that both men were members of the far right, Teeter has explicitly described himself as a “left Anarchist.”

“Michael Solomon and Benjamin Teeter proclaim themselves to be members of the Boogaloo Bois, a group that espouses a violent ideology and an objective to overthrow the government,” U.S. Attorney Erica H. MacDonald said in a statement.

“The defendants believed their anti-U.S. government views aligned with those of Hamas, a foreign terrorist organization, and actively developed plans to carry out violence in Minnesota and elsewhere.”

The Boogaloo Bois are supposedly a “right-wing extremist group aimed at overthrowing the government” whose members have been associated with white supremacy and violence, USA Today reported in June.

According to the DOJ, Solomon and Teeter are part of a subgroup within the Boogaloo Bois, the Boojahideen, who have a stated goal of “overthrowing the government and replacing its police forces.”

Of course, it seems unlikely that supposedly far-right extremists would want to coordinate with a Palestinian terror group and overthrow the U.S. government.

Regardless of where the Boogaloo Bois fall on the political spectrum — according to USA Today, “there are various facets to the loosely organized group” — it’s hard to defend CBS’ characterization of Solomon and Teeter as “far right” given the Justice Department’s description of the pair’s alleged actions.

The two men shared “their ideas about destroying government monuments, raiding the headquarters of a white supremacist organization in North Carolina, and targeting politicians and members of the media” with an individual who they believed was a senior member of Hamas but who was actually an undercover FBI employee, the DOJ said.

It’s usually members of the far left, not the far right, who want to destroy statues and monuments.

In an Aug. 26 tweet, Teeter explicitly identified himself as a “left Anarchist.” 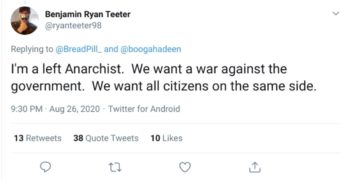 It is media malfeasance for a network to label a self-proclaimed leftist as “far right.”

However, the mainstream media and the left (but I repeat myself) want the American public to believe it’s unfathomable that someone on the left would engage in these kinds of actions, despite the evidence right in front of us.

Almost every aspect of Solomon and Teeter’s alleged behavior — coordinating with Hamas, promoting the destruction of monuments, even suggesting a raid on a white supremacist group — is straight out of the far left’s playbook.

Teeter even explicitly stated that he is on the left.

Nevertheless, CBS associated both men with the far right in the headline of its article.

It’s clear that the establishment media will do whatever it takes to forward the narrative that everyone doing bad things is on the far right.