Actress Kirstie Alley on Friday issued a blunt call for Hollywood liberals to get over themselves and stop persecuting Republicans.

“I refuse to be part of the Hollywood a–hats who can’t see that ‘NOT working with Republicans’ is as stupid and NASTY as ‘REFUSING to do business with gay people’..STOP ACTING above the FRAY ya damn hypocrites…WE are the same species! let’s help each OTHER ya damn yahoos,” she tweeted. 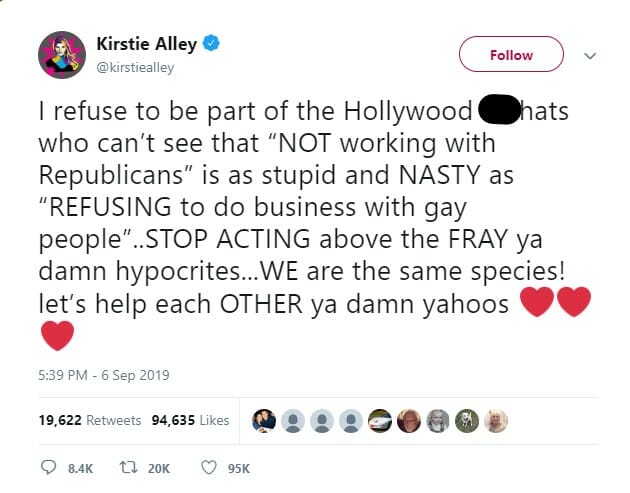 Alley, who formerly starred on the sitcom “Cheers,” also issued a call for tolerance.

“Tolerance isn’t standing up for what’s popular .. Tolerance is understanding and implementing human rights to all humans even though you don’t necessarily agree with their views. Human rights is a good place to start when seeking tolerance for one’s self & others,” she tweeted.

Tolerance isn’t standing up for what’s popular .. Tolerance is understanding and implementing human rights to all humans even though you don’t necessarily agree with their views. Human rights is a good place to start when seeking tolerance for one’s self & others. 🤷‍♀️🌍🌏🌎💫

Alley erupted after a days-long Hollywood brouhaha instigated by comments from Debra Messing and Eric McCormack, who star in the show “Will & Grace.” They have demanded the conservatives who attend a Beverly Hills fundraiser for President Donald Trump be named and then blacklisted.

….said what she did, even being on a much higher rated show, she would have been thrown off television. Will Fake News NBC allow a McCarthy style Racist to continue? ABC fired Roseanne. Watch the double standard!

Messing had retweeted a story about an Alabama church with a sign that read, “A black vote for Trump is mental illness.” She later deleted the tweet and sought to explain herself.

THAT is where my support of a sign at a southern black church came from. The use of the term “mentally ill” was wrong & hurtful. NUMBER 2 I NEVER NOR WOULD I EVER call for a blacklist of anyone for any reason. The info is publicly available. I as a consumer want to know where MY

Messing’s volley against Trump drew backlash that included a scolding from Steve Levy, a former county executive of New York State’s Suffolk County, who erupted in an Op-Ed on Fox News.

“I didn’t vote for Donald Trump for president in 2016 but I probably will in 2020. It’s due in large part to the fascist antics and modus operandi of the left, including actress Debra Messing, of ‘Will and Grace’ fame, who is seeking what amounts to a blacklist of Trump supporters,” he wrote.

Levy said he will take delight in confounding the left.

“The best way to thumb your nose at those who would seek to destroy you for not following their groupthink is to lend support to the very person they so loathe. As the old saying goes: The enemy of my enemy is my friend,” he wrote.

“Who do these radical scoundrels think they are trying to intimidate average law-abiding American citizens from carrying out their constitutional right to support anyone they so desire?”

“It is now doxxing contributors to political campaigns to pressure them into dropping their support for a candidate of their choice,” he added.

“Just take a look at the simple fact that what you are doing is trying to destroy someone’s livelihood, destroy who they are, basically cordon them off from the rest of society because you disagree with what they are saying,” she said. “You know what that reminds me of? Very early days in Germany.”

“My husband is Jewish. We’ve talked about this recently, where because of your faith, because of your beliefs, and because some thought that it was outside of where it needed to be, they would go after your businesses and your livelihood. I’m not saying that that is the slippery slope here, I’m just reminding people that it did happen.”