If you don’t know who Handler is, don’t worry, you aren’t missing out on much. She’s more known for “New York Times Bestsellers” that can be found on any shelf in Goodwill and raunchy humor than her actual acting career that consists of mediocre movies.

However, that didn’t stop Time from listing her as one of the most influential people in the world on its annual “Time 100” list in 2012.

WARNING: The following comments and tweets contain vulgar language that some viewers may find offensive:

Handler’s scolding comments were in response to her ex-boyfriend 50 Cent, born Curtis James Jackson III, sharing an image from a news broadcast on Instagram.

(The image can be seen here, but note: The obscenities are written in full.)

“You used to be my favorite ex-boyfriend,” Handler replied.

You used to be my favorite ex-boyfriend.

The pair had dated for a bit in 2011, and were on good terms with each other after they broke up, according to US Weekly.

That may have changed, though, due to their differing opinions on politics.

Related:
Watch: Biden Slips Up and Finally Agrees with Republicans About Necessity of AR-15s

“So he doesn’t want to pay 62 percent in taxes because he doesn’t want to go from being ’50 Cent’ to ’20 Cent’ and I had to remind him that he was a black person, so he can’t vote for Donald Trump and that he shouldn’t be influencing an entire swath of people who may listen to him because he’s worried about his own personal pocketbook,” Handler said in her interview with the show’s host Jimmy Fallon.

“I haven’t heard back from him yet, but I am willing to, you know, seal the deal in more ways than one if he changes his mind and publicly denounces Donald Trump,” she said.

“I might be willing to go for another spin if you know what  I’m talking about.”

Judging by the likes to dislikes ratio on the video, most viewers were not fans of the interview, with over 2.5k dislikes to 1.3k likes.

?‍♂️oh my God this is effecting my love life now. @chelseahandler I love ya Gator, don’t let Trump and Joe Biden come between us girl. #starzgettheapp pic.twitter.com/PctWkzrqCP

To which Handler responded: 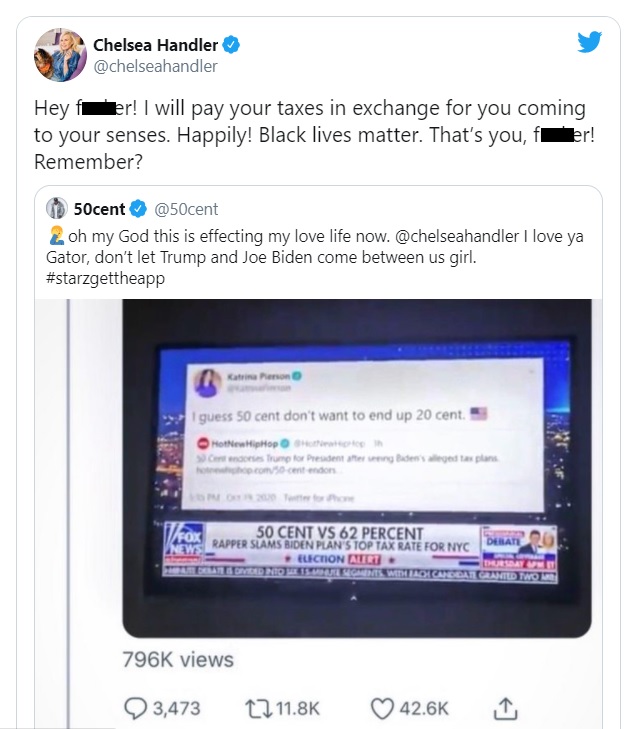 On Friday, the comedian commented again, telling Jackson that the offer stands until Election Day.

Handler’s comments regarding her ex-boyfriend are troubling. Since when was choosing a political candidate to stand behind based on your race? And why is a rich, white liberal “reminding” a black man that “he was a black person, so he can’t vote for Donald Trump”?

It just adds another “you ain’t black” moment to the list from the left.

It’s part of a long list of occurrences whenever a black person comes out in support of Trump. All of a sudden, it is OK to be racist and tell someone they can’t do something because of the color of their skin.

News flash: Race doesn’t determine whom you have to vote for, and Handler, along with other celebrities, aren’t the ones to be talking as they live in their cozy mansions, hardly affected by the chaos of the current political climate.

When asked if she saw the debate on Thursday, Handler replied, “I’ve heard that idiot talk for four years and I don’t need him to say another word.”

“I didn’t really have anything to say,” she said.

The question is, do people really want to hear what she has to say now?

Kayleigh McEnany noted how quickly 'the science' seemed to change to match Stacey Abrams' claim about fetal heartbeats.
By Randy DeSoto  September 24, 2022
Next