Members of the climate change protest group Extinction Rebellion decided to take their demonstrations to the London Underground on Thursday and halt the morning commute for workers.

Some protesters even stood on top of the subway, according to video footage.

British authorities initially attempted to reason with the extremist climate change activists before their protesting could get out of hand or possibly turn into criminal acts.

“Earlier this week, protest organisers at Extinction Rebellion made it clear that they intend to target the London Underground network,” read a Wednesday news release from British Transport Police.

“Since these plans were announced, senior British Transport Police officers have engaged with members of Extinction Rebellion, in order to persuade them into stopping this highly disruptive and potentially criminal action.”

But those persuasion techniques don’t appear to have worked.

The protests went on as planned, and some demonstrators even jumped on top of a train in the London neighborhood of Canning Town, Breitbart reported.

Many residents who wanted to use the subway system were less than pleased with the protesters’ efforts to disrupt their commute.

In at least two cases, angry commuters dragged the protesters off the top of the subway car.

Shocking moment angry commuters drag two #ExtinctionRebellion protestors off the top of a train in Canning Town and attack them. pic.twitter.com/EZAMa9tT2t

In the video above, the two protesters shown on top of the subway are immediately heckled by the angry crowd.

Members of the crowd throw drinks and food at the protesters. Then, a bystander grabs the leg of one of the protesters in the frame, dragging him down to the ground.

Footage shows the protester being beaten repeatedly by different people in the crowd.

Someone in the crowd yells, “Don’t do it!” implying that they want people to stop beating the protester.

Another video posted to Twitter shows a different angle of the events.

People can be heard cheering as two protesters are dragged off the top of the train.

According to police, eight total arrests were made at three stations in London.

“Each person has been arrested on suspicion of obstructing the railway with attempt. They have each been taken to police custody as enquiries continue,” BTP said in a news release.

Assistant Chief Constable Sean O’Callaghan did, however, decry the fact that some angry commuters responded with violence.

“However, it was also concerning to see that a number of commuters took matters into their own hands, displaying violent behaviour to detain a protester at Canning Town,” he said.

“Understandably, the delay to passengers’ journeys would have been annoying, but this level of response was unacceptable. We are now investigating this morning’s events at Canning Town in its entirety.”

“It is important that commuters and other rail users allow the police, who are specially trained, to manage these incidents,” he added. 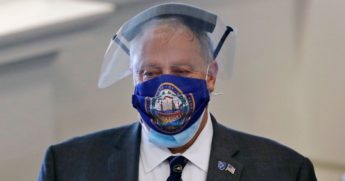