On Tuesday afternoon, a report from New York state’s attorney general concluded that the Democrat had sexually harassed numerous women who worked for him, violating state and federal law in the process, according to The Wall Street Journal.

In the 165-page report, Attorney General Letitia James described a “climate of fear” in Cuomo’s administration, adding that outside investigators found “deeply disturbing” conduct involving younger women and retaliation against those who went public.

“This investigation has revealed conduct that corrodes the very fabric and character of our state government,” James, also a Democrat, said at a news conference Tuesday.

While the attorney general said her office wouldn’t be pursuing a criminal investigation, Albany County District Attorney David Soares said his office was investigating Cuomo’s conduct and would request the documentation from James’ investigation.

That the investigation found evidence of impropriety didn’t startle anyone, but there were two major surprises out of Tuesday’s report.

The first had to do with the depth of Cuomo’s alleged creepiness, which went well beyond what the governor had been publicly accused of.

“The alleged harassment by the governor included inappropriate comments and unwanted hugs, kisses and touching that investigators claim was part of a pattern involving state employees and others. In all, the report detailed allegations by 11 women,” The Wall Street Journal’s Jimmy Vielkind reported.

“In one previously unreported case, a female member of Mr. Cuomo’s state police protective detail … told investigators the governor touched her on the hip and back while she was on duty. At one point Mr. Cuomo asked the trooper why she would want to get married, because ‘it always ends in divorce, and you lose money, and your sex drive goes down.'”

The second surprise was Cuomo’s tone-deaf, two-pronged defense in the immediate wake of the report.

First, he’s just a touchy-feely kind of guy, not a sexual harasser. Second, who else isn’t touchy-feely — particularly other politicians?

“I try to put people at ease, I try to make them smile. I try to connect with them, and I try to show my appreciation and my friendship,” the Democrat said in a recorded statement after the report was released.

“I now understand that there are generational or cultural perspectives that, frankly, I hadn’t fully appreciated.”

That wasn’t going to mollify anyone, particularly now that even Democrats almost universally want Cuomo’s political head on a pike. This is where the #YouToo part comes in, in the form of an 85-page report issued by his office.

As The New York Times’ Brian M. Rosenthal pointed out, the 85-page report contained only 26 pages of text. The rest of it consisted of — no, seriously — pictures of a) Cuomo hugging people like his mother and President Joe Biden or b) other politicians hugging people.

Gov. Cuomo has released an 85-page written response to the independent investigation, but it’s only 26 pages of text. Most of the rest is dozens of photos of him hugging people and other politicians hugging people: https://t.co/qjNW1idpOY pic.twitter.com/AmyfNpKzXG

The hugging portions of the report — I can’t believe I just typed those words, but there you go — are divided into two sections, “Exhibit I” and “Exhibit II.” Exhibit I is Cuomo hugging, kissing and displaying affection to various people ranging from veterans and children to former Vice President Al Gore and former New Jersey Gov. Chris Christie.

“The way he interacts with others is not gender-based,” the governor’s response reads.

“He has hugged or kissed male and female members of his staff, Al Gore, Bill Clinton and Hillary Clinton, Andrea Stewart Cousins and Carl Heastie, as well as constituents he meets on the street, and family and friends, as has been well documented. The Governor’s interaction has been on public display virtually on a daily basis for nearly 20 years. (Ex. 1.) The Governor’s conduct in this regard is unremarkable: Democratic and Republican politicians, male and female alike, use handshakes, hugs, and kisses to connect with others.”

Exhibit II, meanwhile, is those other politicians hugging and kissing. 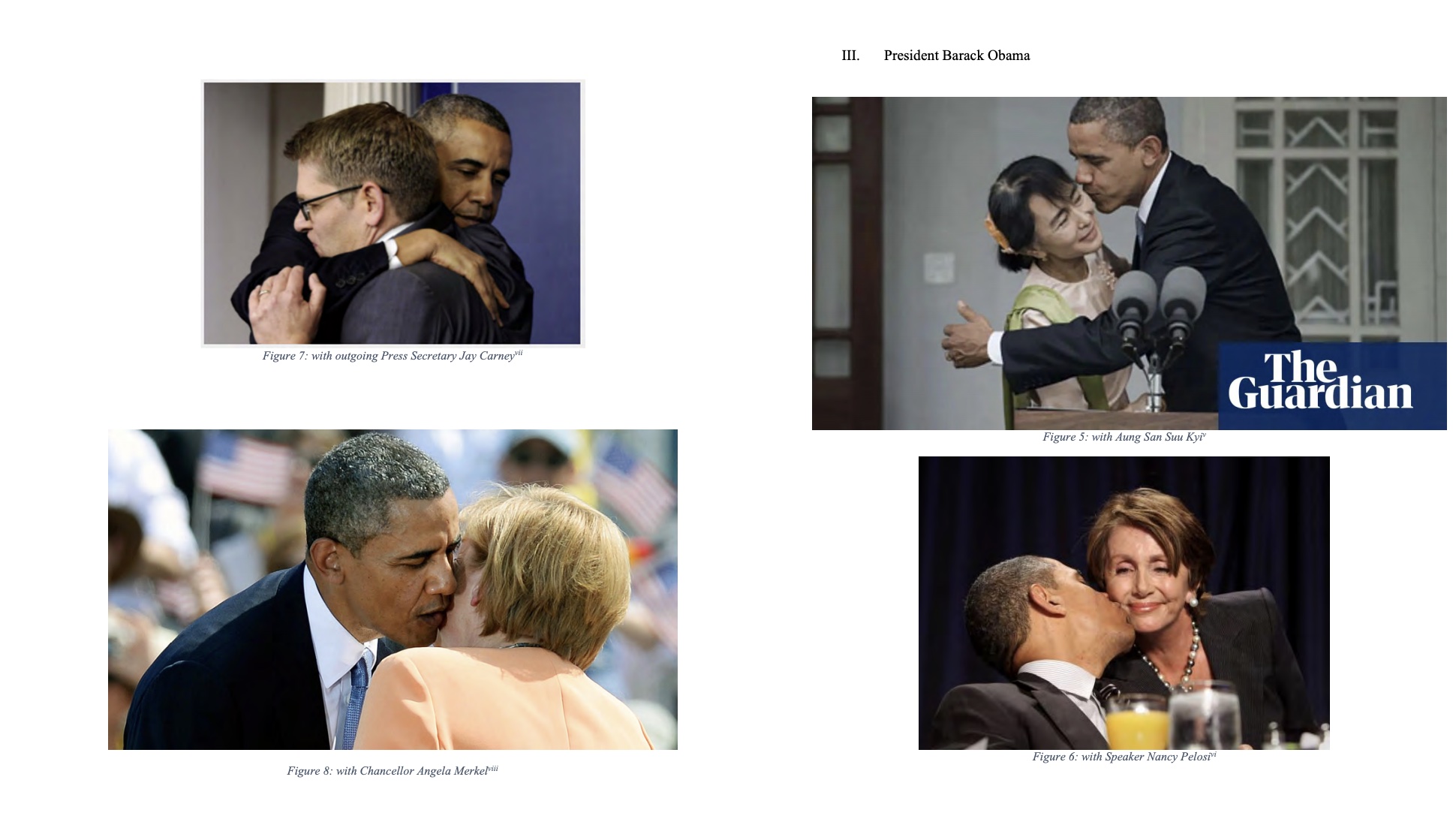 This goes on and includes Obama and former President George W. Bush hugging hurricane victims, which is supposed to be exactly the same as what Cuomo is accused of doing.

There are many pages of pictures of politicians hugging, including some unrelated to Cuomo https://t.co/MVoLKk8G5T pic.twitter.com/ZcModVjBVa

You’ve got to be kidding me. Andrew Cuomo has published an 85 page report that includes pictures of Joe Biden, Kamala Harris, and Barack Obama hugging to defend himself from his sexual harassment claims. pic.twitter.com/9uopwLkjn6

Not content to throw Biden, Obama and former Secretary of State Hillary Clinton under the bus, he also decided to include his father, former New York Gov. Mario Cuomo, in two shots at the end: 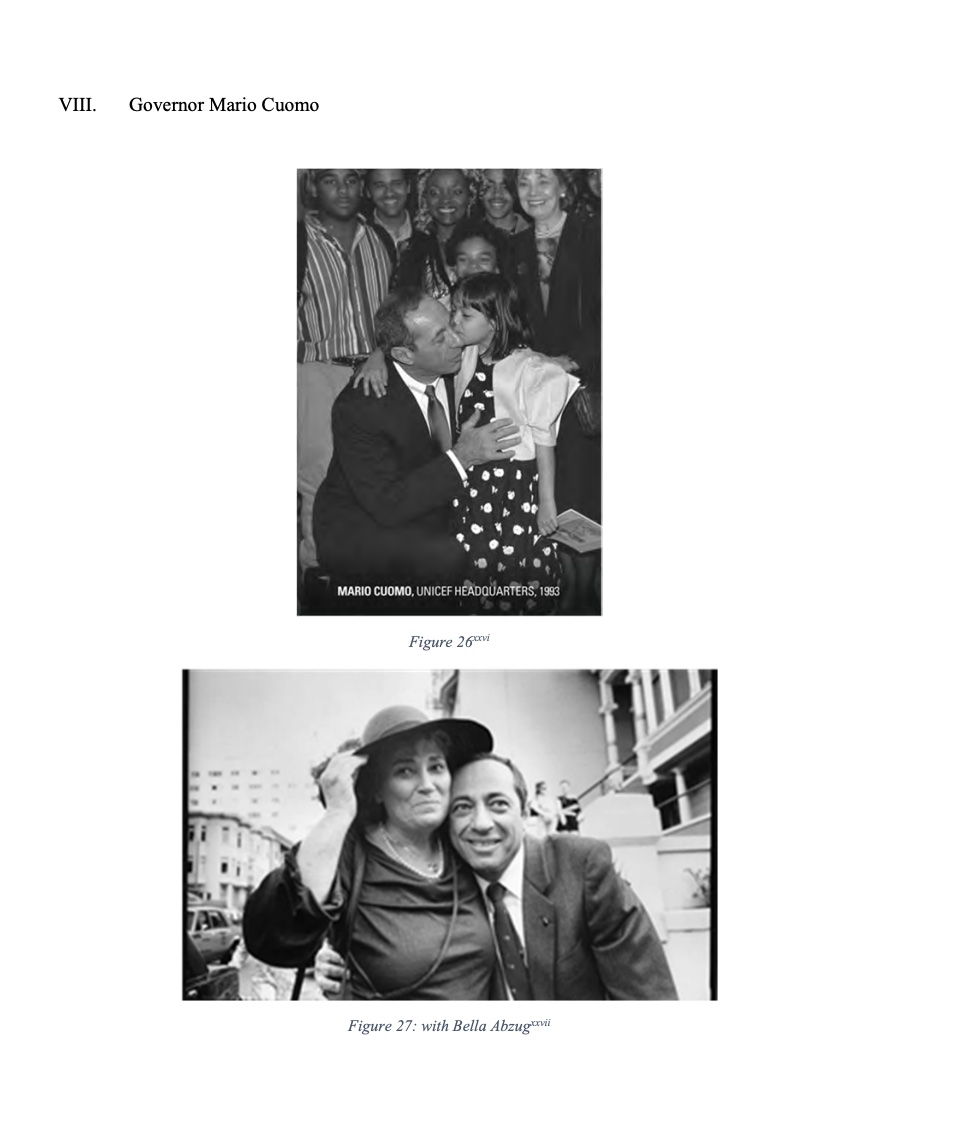 No matter how accurate the picture laid out in James’ report may be, Cuomo’s 85-page photo collage represents an insane strategy borne of a warped mind willing to take whoever he can down with him.

You almost feel unalloyed sympathy for the politicians Cuomo is desperately trying to use as hostages — except these are some of the same politicians who hailed the governor as a de facto party leader last summer before it all hit the fan.

No, Cuomo’s alleged history of sexual harassment wasn’t public knowledge then, but what Democrats did know was that New York’s governor was a volatile man prone to bullying and fractiousness.

You didn’t need to be a political insider to be aware of this; Cuomo’s public demeanor revealed everything about who he was and what he stood for.

However, in the midst of the pandemic, liberals loved his media briefings and the media used him as an antidote to then-President Donald Trump — so the Democrats cosigned a huge rise in Cuomo’s political fortunes.

Now, a year later, they’re getting dragged into #YouToo.

In order to codify same-sex marriage into law, our representatives had to pervert the very meaning of the word "marriage."
By Richard Blakley  December 9, 2022

The nation of Peru has been plunged into political crisis after socialist president Pedro Castillo was removed from office by the Congress.
By John McCann  December 9, 2022
Next