With President Joe Biden’s polling numbers in the tank, and Vice President Kamala Harris’ even lower, Democrats in D.C. are maneuvering to force Harris out — and they plan to do it soon.

Democrats nationwide are in a panic following their dismal showing in the recent elections. With next year’s elections just over the horizon, two realities are causing anxiety for Democrats at all levels of government.

The first is the president’s obvious decline, both physically and mentally. They realize that he will not be capable of stumping for candidates across the country. The second is the reality that the veep is alarmingly unpopular across wide swaths of the electorate. Most candidates think having Harris visit their districts would be a drag on the ticket.

Plus, the Democrats are terrified at the possibility that Biden might become incapacitated or perhaps die in office. Harris would immediately become president and also be the presumptive nominee in 2024. The Democratic leadership is convinced that she could not win the presidency in her own right in 2024.

You don’t have to take my word on it. Liberal political blogger Matthew Yglesias wrote last July, “Perhaps the worst-kept secret in Washington is that tons of Democrats are terrified of the prospect of Kamala Harris becoming the Democratic Party presidential nominee at some point in the future.”

In sum, the Democrats are facing a drubbing in the 2022 elections.

They are almost certain to lose their majority in the House (Rasmussen gives the Republicans a 51-38 edge), and quite possibly in the Senate as well. Add to that the likelihood that several state legislative chambers will flip to Republican, and you can see why next year is shaping up to be “Annus Horribilis” for the Democrats.

Their leadership has concluded that they must do something dramatic to change the political landscape before next year’s campaigns begin. Many factors lead me to conclude that the West Wing and congressional leadership are working behind the scenes to remove Harris from office.

When the Democrats settled on Biden as their nominee, many assumed the plan was to prop him up in office until 2024 when their new “star” Kamala Harris would ascend to the Oval Office, sort of a “Weekend at Bernie’s” scenario. However, with the president rapidly decomposing before our eyes and Harris’ dismal performance in office, the Democrats have concluded that Harris must go — and soon.

Here are some of the signs that the White House is undercutting the vice president.

She was assigned a portfolio of controversial and virtually impossible-to-achieve issues: stemming the flow across our southern border and passing legislation to federalize elections to overturn state laws that make it harder to commit voter fraud.

More recently Harris was dispatched to France for the thankless task of trying to mend our relationship in the aftermath of keeping French President Emmanuel Macron in the dark as the Biden administration canceled the French contract to build submarines for Australia.

Those are tough assignments and the negative press she generated has eroded support to the extent that only 28 percent of voters approve of her performance in office. Another poll found that 47 percent did not think she was qualified to be president.

A string of negative stories began appearing starting in May with a story headlined, “Another Unflattering Portrait of US Vice-President Harris.”

Similar stories, attributed to “anonymous White House sources” have appeared at an ever-increasing rate: “White House ‘Perplexed’ By Kamala Harris Performance on First Foreign Policy Trip: CNN”, “After Bragging That She Played a Central Role In President Biden’s Afghanistan Withdrawal Decision, U.S. Vice-President Harris Has Not Had A Public Event In 6 Days”, “At 28 percent approval, say goodbye to Kamala Harris being Plan B to an aging Biden”, “Biden’s milestone VP pick is looking more like a millstone”, “The Long Knives Come out for Kamala Harris as Her Vice Presidency Continues to Collapse.”

The drumbeat picked up with a June 30 Politico story: “Not a healthy environment: Kamala Harris’ office rife with dissent.” It quoted anonymous White House sources saying that Harris’s office was dysfunctional. “It’s become an all-too-familiar pattern for a politician who has churned through several iterations of staff on her rise.”

Similar stories denigrating Harris continued all summer. Then, on Nov. 2, the world collapsed on the Democrats with dismal showings in state and local elections across the country. 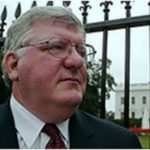 Pat Nolan
Op-Ed Contributor
Pat Nolan is a respected leader in the national conservative movement. He served in the California state Assembly for 15 years and was Republican leader from 1984 to 1988. Under his leadership, Republicans came within five votes of removing Willie Brown. Pat received the Victims’ Advocate Award from Parents of Murdered Children. Pat founded the Nolan Center for Justice at the American Conservative Union Foundation and serves as director emeritus. conservativejusticereform.org
Pat Nolan: Hooray for Coach Dungy's Work to Connect Fathers with Their Young Sons
As Dems Accept Biden's Decline, Here's What They're Doing to Harris Behind the Scenes
Pat Nolan: Thou Shalt Not Steal... an Election
See more...
Advertisement

CBS responded to singer Sam Smith's tweet before he went on to perform the song "Unholy" at the Grammys on Sunday.
By Peter Partoll  February 6, 2023

Team Biden tried to drag Donald Trump into the Chinese spy balloon disgrace. It isn't working. And it's not going to work.
By Joe Saunders  February 6, 2023

Stories like this prove green energy technology is not ready to power the world, and the powers that be don’t want the rest of us to know it.
By Johnathan Jones  February 6, 2023

Dave Chappelle's "The Closer" was derided by many as being a transphobic comedy special. Turns out it's also an award-winning special.
By Bryan Chai  February 6, 2023
Next