2 Months Prior to Raid, FBI Had Already Secured Docs - What Changed?

Congress is about to tie itself in knots and relitigate its favorite battle — the drive to rein in spending and hold down the deficit.

All the usual elements are there:

• Republicans who want to break the sequester caps for more defense spending.

• Democrats who insist on raising discretionary domestic spending in tandem with military increases.

• Experts who want to hold down the deficit.

• Alarmists who worry that a deadlock might delay raising the debt limit.

• Congressional leadership that wants to appear responsible, and a president who has yet to reveal his agenda.

But let’s step back and ask the heretical question: How much do deficits really matter?

The chart below gives the annual ratio of deficit to gross domestic product: 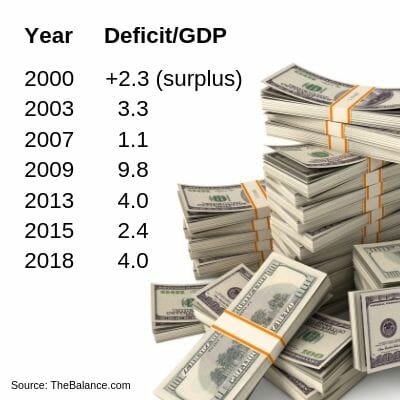 Then, responding to the crash and trying to keep body and soul together, President Barack Obama rained down stimulus money and the deficit-to-GDP ratio rose to nearly 10 percent.

Related:
Veronique de Rugy: Inflation Is Bad, But Combined with 1 Other Metric, It Makes a Disastrous Combo

Then the ship stabilized and that figure shrank back down to the 2 to 4 percent range, where its been ever since.

We need to hold down the deficit largely because our past indebtedness is so great — a national debt of over $22 trillion — that any increase in interest rates can destroy our economy.

If rates were, for example, to go up 2 points — 200 basis points — it would cost more than $400 billion more in debt service, or about 2/3 of our total annual defense spending.

With this price tag on rising rates, the Fed works overtime to avoid it. Should inflation reappear, this could tie our hands in fighting it. No more Paul Volcker choking inflation with massive interest rate hikes.

There is also some evidence that this amount of public borrowing forecloses small and other businesses from borrowing for job creation and crowds them out at the lending window.

These harms are real enough, but don’t go nuts. This level of deficit-to-GDP is roughly normal, given our times, and not likely to drag the nation to despair and ruin.

So watch the deficit games unfold, but don’t worry that our national survival is at stake.

Dick Morris
Dick Morris is a former adviser to President Bill Clinton as well as a political author, pollster and consultant. His most recent book, "50 Shades of Politics," was written with his wife, Eileen McGann.
Morris: The Fake News Media Is Already Working Overtime for Their Democratic Overlords for 2024
Dick Morris: Something Is Happening to Voters When They Turn 26, And Democrats Won't Be Able to Stop It
Dick Morris: Tucker Carlson Is Dangerously Wrong on Russia and Ukraine
Dick Morris: There's One Big Lesson Hiding in the Rittenhouse Case
Dick Morris: Rest in Peace, Colin Powell
See more...
Advertisement

America’s schools are being used not to educate but to indoctrinate our children in radical ideologies.
By Gary Bauer  August 12, 2022

Dr. Anthony Fauci boasted of being an embodiment of truth and integrity.
By Andrew Jose  August 12, 2022

A fight that resulted in the suspension of a Spirit Airlines employee was caught on camera at Dallas Forth Worth Airport.
By Richard Moorhead  August 12, 2022

On July 18, Democratic Rep. Rashida Tlaib speaks at a news conference in Washington, D.C., expressing her opinion that the Supreme Court should be expanded.(Jemal Countess / Getty Images

Democratic Rep. Rashida Tlaib Reportedly Raked in Tens of Thousands of Dollars in Rental Income as She Pushed for 'Nationwide Cancellation' of Rent

The Michigan Democrat's recent annual financial disclosure shows that she collected at least $15,000 and up to $50,000 in rental income.
By Matthew Holloway  August 12, 2022

A day at the beach turned deadly for a South Carolina woman when she was struck by a flying beach umbrella.
By David Zimmermann  August 12, 2022
Next