The suspect in the vandalism of a New York synagogue was a Democratic activist and former city hall staffer who worked on anti-hate crime issues, The Daily Caller News Foundation has learned.

He is a “queer” black man informally adopted by a Jewish couple, and the New York Times’ charity, the Neediest Cases, helped pay for him to go to college where his focus was African-American studies, according to a 2017 New York Times profile.

A political event with two Democratic candidates at the Union Temple of Brooklyn was canceled Friday after attendees found graffiti saying “Die Jew Rats” and “Hitler,” which one of the candidates said highlighted the need to vote out “hate.” Police arrested 26-year old James Polite later that night based on surveillance footage.

A year ago, The New York Times profiled Polite, noting that he was an LGBT foster youth who “could defy the statistics” after becoming the “adopted child of the Quinn administration,” as Christine Quinn, then the speaker of the New York city council, put it. “And it wasn’t just me. It was the entire City Council staff.” 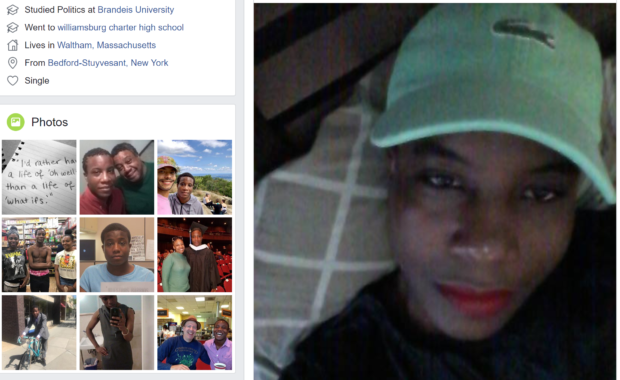 In the 2017 profile, The New York Times said Polite, who requested to join the foster care system after his mother provided “unsanitary” conditions for him, “interned with Ms. Quinn, a Manhattan Democrat, for several years, working on initiatives to combat hate crime, sexual assault and domestic violence. He also took part in her re-election campaign in 2009 and returned to help with her unsuccessful bid for mayor in 2013.” 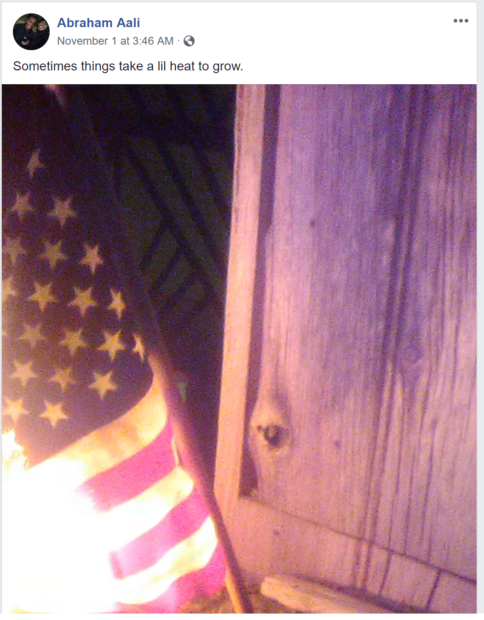 His Facebook profile, reviewed by TheDCNF, shows that on Nov. 1, a day before the synagogue vandalism, he posted “A dream with eyes wide open. civil war is here. Nobody gotta die. Mexico, latin America, carribean vs. Jew nigger pigs. One person touch me this whole shit a smoking.”

At 3:46 a.m. on Nov. 1, Polite posted a cell-phone picture of a burning American flag, with the caption “Sometimes things take a lil heat to grow.” Police suspect him of setting fires at “seven shuls and yeshivas in Williamsburg” that same night, before the temple vandalism. Security footage captured that, too.

The Facebook profile pictures and biographical information reveal that it is the same man in The New York Times’ profile. Its URL includes James Polite, but he changed his online name to Abraham Aali.

The Times profile said that the New York councilwoman helped Polite get into college:

Ms. Quinn wrote Mr. Polite a letter of recommendation to Brandeis University in Waltham, Mass., and followed up with a call to its president. Council staff members even drove him there on move-in day.

“We did everything that was stepping over the line,” Ms. Quinn said. “But I didn’t care. He had worked so hard all his life, and he needed a break.”

Mr. Polite said his experiences working with Ms. Quinn and on the presidential campaign changed his trajectory. Otherwise, he said, “I would probably have not gone to college.” 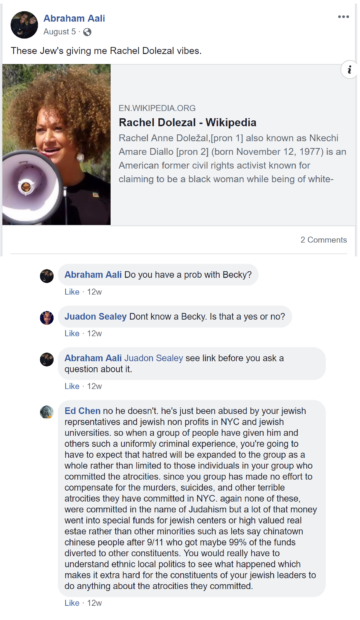 The Times’ charity, “The New York Times Neediest Cases Fund, took over Mr. Polite’s case” as he aged out of the foster care system, and helped him attend Brandeis.

“Mr. Polite hopes to graduate in May with degrees in African-American studies and political science, and took two classes over the summer to stay on pace,” the profile said. “In June, Children’s Aid used $856 from the Neediest Cases Fund for school supplies and fees not covered by his financial aid package.”

On Facebook, he shared a paper hosted on Brandeis’ website from the Journal of Black Studies about “witchcraft, race and resistance in colonial New England,” highlighting how “Whites accused blacks of the crime of witchcraft in New England.”

The Times profile also pictured Polite next to a smiling couple, Joshua Waletzky and Jenny Levison. They “wanted to foster an ‘L.G.B.T.Q. youth’ on the brink of aging out of the system,” the Times wrote. “Although Mr. Polite was not legally adopted — his relationship with his biological parents has improved in recent years — Ms. Levison called it a ‘moral adoption.’ He says he considers the couple his second set of parents.”

The Times issued a correction in the profile: “an earlier version of this article referred incompletely to the type of youth whom Josh Waletzky and Jenny Levison sought to foster. It was an “L.G.B.T.Q. youth” on the brink of aging out of the system, not merely a gay youth.”

But on Facebook, Polite mocked such “hipsters” as naive gentrifiers looking to feel good about themselves. In one post, at the bottom of which he named Waletzky and Levison, he wrote:

Yes, she is competing with the people of the Bubble which POC she can hire, it’s starting to look like white people take home six figures for their lifetime of sacrifices to POC. Yes, they know what you’re gonna say. As soon as they find a bubble safe token they’ll be sure to objectify him and brandish like that overpriced culturally appropriated drink.

They’re back at Hipster Manifest Density with new art. Something in Spanish featuring an indigenous who could have been the indigenous person who died on land with a view that they and their friends of the bubble would die for. A card identical to the one that arrived in their secluded section of the East Granolaville section of Eveywhitesuburb, USA. Bloods runs down like rain water that danced across clay.

The blood leaves it’s holder red handed as she clinches on to her paid subscription to I’ve done my part for these POC. They pull out translucent hand sanitizer to their macs which blood is dried by the heat of turbines cooling down minerals with blood. That goes unnoticed in corner office at the Race Pimp industrial complex.

Before it had been known that the suspect was a Democratic activist being paid by taxpayers to work on hate crime issues, Gov. Andrew Cuomo said he was asking the state’s Hate Crimes Task Force to investigate the incident, and pointed to “an additional $10 million grant program to help protect New York’s non-public schools and cultural centers, including religious-based institutions. The disgusting rhetoric and heinous violence in this nation has reached a fever pitch and is ripping at the fabric of America.”

And one of two Democratic candidates speaking at the event, Jim Gaughran, said:

“What this incident highlighted is the need for a change in our current political climate. Hate, bigotry, and fear-mongering have become all too common in today’s society and that needs to change. This change won’t happen on its own, however. It is up to us! That’s why it is so important that every single person gets out and votes in Tuesday’s election so we can stop the spread of hate.”

Quinn did not immediately return a request for comment.

In other Facebook posts, Polite rails against Israel and posts about Palestinian causes. On Oct. 11, he posted “apologise for everything hurtful I posted that offended my friends. There is a way to reject zionism without being antisemetic.”

No one answered the phone at a number listed for Josh Waletzky.

The Times did not immediately answer TheDCNF’s request for comment.

The giant of a man disposed of the wayward protesters with all the grace and gentleness of a mother dog relocating her pups.
By Chase McCown  December 2, 2022

A man Dog the Bounty hunter called his "right-hand man for many years" has passed away unexpectedly at the age of 50.
By Jack Davis  December 2, 2022

Elon Musk 'Confident' That Brain Implants Are 'Ready for Humans' - Is This a Good Idea?

A 10-year-old boy with a troubled history is being charged as an adult in connection with the shooting death of his mom.
By Jack Davis  December 2, 2022

Brad William Henke, known for his brief time in the NFL and later acting career, died in his sleep. The cause is unknown.
By Abby Liebing  December 2, 2022

Former President Donald Trump has lost another round in court in connection with the Mar-a-Lago raid conducted by federal officials.
By Jack Davis  December 2, 2022
Next