U.S. Secretary of State Mike Pompeo has urged the world to unite against the Chinese Communist Party and push back against the challenge posed by the CCP to the world today.

He also contends that the U.S. has not taken the Chinese threat seriously in all these years. Pompeo’s call to the rest of the world comes at a time when nations are realizing the deleterious impact of Chinese actions regarding the spread of the coronavirus pandemic.

Creating a coalition of willing partners is as important for the U.S. as targeting the CCP, the root cause of the spread of the pandemic around the world. U.S. rhetoric on the CCP in recent months has also been backed by its actions in the South China Sea in response to China’s aggressive moves in the last couple months.

Pompeo’s July 13 statement was the clearest indication of U.S. intentions yet.

“The United States champions a free and open Indo-Pacific,” he said. “Today we are strengthening U.S. policy in a vital, contentious part of that region — the South China Sea. We are making clear: Beijing’s claims to offshore resources across most of the South China Sea are completely unlawful, as is its campaign of bullying to control them.”

Earlier, the U.S. had sent its aircraft carriers to the SCS, which by itself was a significant development and a clear response to Chinese military exercises in the area. The Trump administration has termed Chinese claims in the SCS “completely unlawful” in the clearest statement yet since China started building military bases on remote reefs and islands deep in international waters.

At the 36th Association of Southeast Asian Nations Virtual Summit this year, Vietnam and the Philippines warned of growing insecurity in Southeast Asia due to China’s activities in the SCS.

ASEAN countries joined Vietnam in opposing China’s activities in the SCS on the basis of the 1982 United Nations Convention on the Law of the Sea.

The Philippines and Vietnam separately criticized China for conducting naval exercises in the waters near the Paracel Islands, a disputed part of the SCS, warning that it could create tension in the region and impact Beijing’s relationship with its neighbors.

Philippine Defense Secretary Delfin Lorenzana said the Chinese exercises in the disputed part of the SCS were “highly provocative,” while the Vietnamese Foreign Ministry lodged a diplomatic complaint against China that the exercises “seriously violated” Vietnam’s sovereignty.

Beyond the rhetoric in recent weeks, the Trump administration has also moved its forces into the region.

Two U.S. Navy aircraft carriers, the USS Ronald Reagan and the USS Nimitz, moved for operations to the Bashi Channel, south of Taiwan, before heading to the SCS. Another aircraft carrier, the USS Theodore Roosevelt, was also in the area.

The two U.S. carriers arrived in the region as China wrapped up its own naval exercises near a disputed island chain, an apparent synchronicity not lost on Beijing’s state media, which boasted of the country’s readiness to repel any U.S. attempt to challenge its claims. The U.S. also deployed two refueling tankers and six reconnaissance aircraft in the Bashi Channel.

Pompeo also referred to Chinese military exercises in the SCS as “highly provocative” and opposed Beijing’s “unlawful claims.” He subsequently said that in the SCS and elsewhere, all nations must support a free and open rules-based order that upholds the sovereign rights of all states regardless of size, power and military capabilities.

Separately, Philippine Foreign Affairs Secretary Teodoro Locsin Jr. warned China of “the severest response” if its military exercises in the SCS “spill over” to their territory. Significantly, Pompeo said “the PRC’s predatory world view has no place in the 21st century” adding that China had no legal grounds to unilaterally impose its will on the region.

Pompeo recalled the unanimous 2016 decision of the Arbitral Tribunal constituted under the 1982 UNCLOS, to which the PRC is a state party, that rejected the PRC’s maritime claims as having no basis in international law. It is imperative for the world to remind China that the Tribunal “sided squarely” with the Philippines, which brought the arbitration case, on almost all claims.

A report from the Chinese state-run Global Times called the U.S. carriers in the SCS “nothing more than paper tigers on China’s doorsteps” and said Beijing has more than enough firepower to defend its positions in the SCS.

The GT report claimed that “[t]he South China Sea is fully within the grasp of the PLA, and any US aircraft carrier movement in the region is closely watched and taken aim at by the PLA, which has a wide range of anti-aircraft carrier weapons like the DF-21D and DF-26, which are both regarded as ‘aircraft carrier killer’ missiles.” The war of words and actions in the SCS are seen to be gradually escalating and one can visualize greater U.S. deployments in the area in the near future.

Chinese rhetoric on U.S. actions in the SCS also shows the state of play within the CCP. This is a direct result of the insecurity within the party to global reactions to China’s spread of the coronavirus.

Note, for instance, the Chinese reaction in July to the Trump administration’s rejection of China’s broad territorial claims in the South China Sea when it termed the U.S. “a troublemaker and a disruptor of regional stability.”

The irony is that China wants to be the kingmaker in the SCS and garner territory and resources by illegally occupying islands and reefs and settling them with military personnel and equipment. The scale of this occupation has been unprecedented, perhaps equaled only by Chinese land-grab on the border with India in the Himalayas.

China uses a “nine-dash line,” sourcing it to maritime records from dynastic times, to claim about 90 percent of the waterway that others in the region value for its fisheries and undersea fossil fuel reserves. The “nine-dash line” also cuts into some nations’ exclusive economic zones.

It is in this context that one must view the recent statements by the U.S. secretary of state. A little earlier, Japanese Defense Minister Taro Kono, U.S. Defense Secretary Mark Esper and Australian Minister of Defense Linda Reynolds had held a Trilateral Defense Ministerial Meeting.

Their joint statement reaffirmed their commitment to enhancing security, stability and prosperity in the Indo-Pacific region. The ministers expressed concern over China’s imposition of a national security law upon Hong Kong and reaffirmed their opposition to the use of force or coercion that could alter the status quo and increase tensions in the East and South China Seas, including continued militarization of disputed features, dangerous or coercive use of coast guard vessels and maritime militia and efforts to disrupt other countries resource exploitation activities.

Indonesia and the Philippines joined in, calling on China to abide by the international arbitration court ruling.

Malaysia remains the only country to have declined to comment despite a recent Malaysian government report stating that incursions into Malaysia’s EEZ by Chinese ships had taken place 89 times between 2016 and 2019.

However carefully nations craft their relationships with China, at the end of the day, the realization that China’s actions and intent are offensive in nature must bring home the fact that national interest demands a gathering of nations with the U.S. in the lead to make the CCP understand that its predatory tactics can no longer succeed.

That tensions in the SCS are likely to rise in the coming weeks and months can safely be assumed. The question now is: Will China will be the first one to back down?

The answer depends on two factors. One, how much Xi Jinping is in need of mobilizing nationalism at home to fasten his grip on power; and two, how united the concerned countries are and how determined they are to confront and counter China’s aggression.

Jianli Yang
Jianli Yang is founder and president of Citizen Power Initiatives for China.
Jianli Yang: A Lamentation
Jianli Yang: Nameless but Not Forgotten - Remembering the Tank Men of Tiananmen Square
Experts: Safe To Assume We're About To See Tensions with China Rise - And Soon
Op-Ed: Communist China Escalates Media War During Global Crisis
Op-Ed: Coronavirus Is Not the Only Epidemic Coming from China
See more... 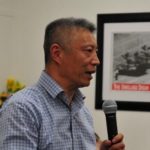 Bucking the woke trend, Buffalo Bills player Damar Hamlin is very open about his Christian faith and credits God for his speedy recovery.
By Warner Todd Huston  January 30, 2023
Next